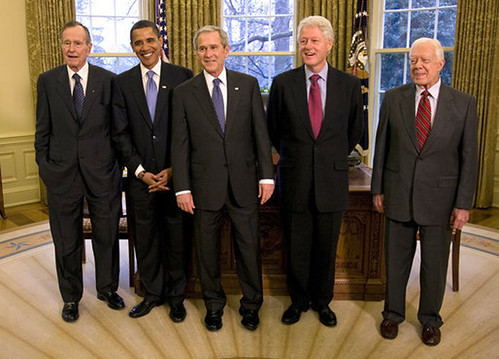 It’s Presidents Day, and we here at Wordnik are celebrating by taking a look at some presidential words. Some are coinages, others were merely popularized, and at least one has been misattributed. Cue “Hail to the Chief” as you explore these 11 words from U.S. presidents.

“In reviewing the incidents of my administration, I am unconscious of intentional error.”

While the word administration was in use for hundreds of years before Washington’s, his was the first to refer specifically to a “U.S. president’s period in office,” says the Online Etymology Dictionary.

Another Washingtonian coinage is Brother Jonathan, “a humorous designation for the people of the United States collectively.” The term is supposed to have come from the way the first president addressed one of his trusted advisors, Jonathan Trumbull.

“Necessity obliges us to neologize.”

Of course neologize, to coin or use new words, is one of our favorite presidential neologisms. Like Wordnik founder Erin McKean, Jefferson was in favor of making up new words, including belittle, odometer, Anglophobia, and one isolated use of public relations.

“The Democratic O.K. Club are hereby ordered to meet at the House of Jacob Colvin.”

The word OK can thank Martin Van Buren, at least in part, for its popularity. The affirmation began as part of 1839 “slang fad” in Boston and New York, says the Online Etymology Dictionary, and an abbreviation of oll korrect, a deliberate misspelling of “all correct.”

Around the same time, says Mental Floss, “OK merged with Martin van Buren’s nickname, Old Kinderhook,” and later gained negative meanings such as “out of kash” and “out of karacter.” However, what might have given OK the long-term OK was the telegraph, for which OK became a handy way to acknowledge transmissions.

“He had finished a paragraph of a distinctly character, when he suddenly stopped, swung round in his swivel chair, and said: ‘I suppose my critics will call that preaching but I have got such a bully pulpit!’”

The phrase bully pulpit, “an advantageous position, as for making one’s views known or rallying support,” is attributed second hand to Theodore Roosevelt. As World Wide Words points out, bully here may not refer to the modern sense of being pushed around or harassed, but to an older meaning of “excellent” or “splendid.”

Another term coined by Roosevelt is lunatic fringe, the fanatical or extremist members of a group or society. He also popularized muckraker, “one who inquires into and publishes scandal and allegations of corruption among political and business leaders.”

We can’t forget the teddy bear which was named for the 28th president, who, famous as a big-game hunter and conservationist, inspired a cartoon with two bears named Teddy. German toy dealers smelled an opportunity and created a line of “Roosevelt bears” to export to the U.S.

“America’s present need is not heroics but healing; not nostrums but normalcy; not revolution but restoration.”

Like bloviate — a word Harding used to describe his own “long-winded speaking style,” normalcy was a word that Harding popularized rather than coined, according to Visual Thesaurus. However, Harding is credited with creating the term founding fathers.

Like bully pulpit, iffy is attributed by word of mouth: FDR is said to have been the first to use the word to describe uncertainty or doubt about a situation.

“Eisenhower’s speech invoked what would be known as the ‘domino theory’ — the notion a communist takeover in Indochina would lead other Asian nations to follow suit.”

The domino theory, the idea that once one nation becomes Communist, neighboring ones will also fall, like dominoes, under Communist control, comes from Eisenhower’s 1953 speech: “You have broader considerations that might follow what you would call the ‘falling domino’ principle.”

Welfare queen, referring to a woman who appears to live in luxury while defrauding the welfare system, is often associated with Ronald Reagan. However, he never actually used the term, and its attribution actually goes to George Bliss of The Chicago Tribune.

“Bush warned a friendly crowd of students not to be deceived by Reagan’s ‘voodoo economics’.”

Voodoo economics is a derogatory term for unrealistic or ill-advised economic policies, as the Oxford English Dictionary (OED) puts it. It was coined by the first president Bush, George H.W., in 1980, prior to becoming the Gipper’s running mate: “Bush warned a friendly crowd of students not to be deceived by Reagan’s ‘voodoo economics’.”

“States like these, and their terrorist allies, constitute an axis of evil, arming to threaten the peace of the world.”

Axis of evil, referring to Iran, Iraq, and North Korea, is probably one of the most well-known Dubya-isms. The term was coined by his speechwriter at the time, David Frum, who has said that he saw similarities between this axis of evil and the WWII Axis powers of Germany, Italy, and Japan.

President Bush is also known for what some consider linguistic gaffes, such as misunderestimate, embetterment, and nucular for “nuclear.” While misunderestimate is a conflation of misunderstand and underestimate, according to the OED, embetter was an actual word used from the 16th to the 19th centuries.

As for nucular, that’s an example metathesis, “the switching of two adjacent sounds,” and Bush wasn’t the only who went nucular. Presidents Eisenhower, Carter, and Clinton were also guilty of “mispronouncing” the word.

Romnesia, in case it isn’t obvious, is a blend of the name of one-time presidential contender Mitt Romney and amnesia.

Romnesia isn’t Obama’s only coinage. Back in 2009 he said, “”There’s something about August going into September where everybody in Washington gets all wee-weed up.” No one could really figure out what he meant, although Urban Dictionary has a few interesting theories, such as that “wee-wee” has nothing to do with urine but with the little pig who cried wee-wee-wee, all the way home.

As for the most famous neologism about Obama, Obamacare, that was apparently coined by lobbyist Jeanne Schulte Scott in 2007.

Want more presidential words? You might like Paul Dickson’s Words from the White House: Words Coined or Popularized by America’s Presidents and OK: The Improbable Story of America’s Greatest Word by Allan Metcalf.