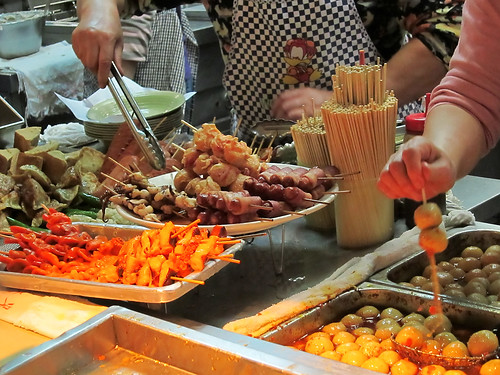 Welcome to Word Buzz Wednesday, your go-to place for some of the most interesting words of the week. The latest: a revolutionary hashtag, tipsy fish, and an excellent insult.

“Reports of a crackdown against the hawkers who sell fish balls and other local food delicacies quickly spread on social media along with the hashtag #fishballrevolution.”

#fishballrevolution joins other revolutionary hashtags such as #BlackLivesMatter, #YesAllWomen, and the 2014 pro-democracy protests in Hong Kong known as the #umbrellarevolution.

The fishball revolution protests came as a result of Hong Kong’s “Localist” movement activists defending unlicensed food vendors, whom police were attempting to shut down.

“Hypercapnia interferes with neuroreceptors in brains of fish, causing them ‘to become intoxicated,’ the study’s lead author, Dr Ben McNeill of UNSW, said in a statement.”

A study in Nature found that the concentration of CO2, or carbon dioxide, in some oceanic regions might increase to the point that fish would suffer from hypercapnia, “a build-up of CO2 in the blood,” which causes a kind of drunkenness. As a result, the fish would lose their sense of direction, leaving them unable to locate predators.

The word hypercapnia comes from the Greek hyper-, “over, above, beyond,” and kapnos, “smoke.”

“The sacred crocodile is also reportedly more docile than its belligerent Nile cousin, and digs caves in which it shelters.”

The sacred crocodile, or Crocodylus suchus, is the second species of the Nile crocodile, previously thought to be just one species. The name was coined by scientist Evon Hekkala, who with her team discovered that the crocodiles used in sacred ceremonies were all C. suchus. Moreover, according to the ancient Greek historian Herodotus, “Egyptians selectively used a smaller, tamer crocodile in ceremonies and regarded it as sacred.”

“The Swiss city of Lausanne has banned outdoor silent discos, saying that they are too noisy.”

A silent disco is one in which music isn’t played aloud but via headphones. The practice apparently originated in the Netherlands in the early 2000s.

However, it seems, silent discos aren’t immune to noise, at least in one Swiss city where participants can’t help but sing along with the music.

“Donald Trump will be familiar with most abuse but the latest – ‘wazzock’ – might leave him flummoxed.”

According to The Guardian, wazzock is “Northern slang for a stupid or annoying chump,” and is what Conservative Member of Parliament Victoria Atkins called Donald Trump during a debate about whether or not to bar the GOP presidential hopeful from Britain. While the term originated in the 1970s, says the Oxford English Dictionary, its origin is largely unknown.