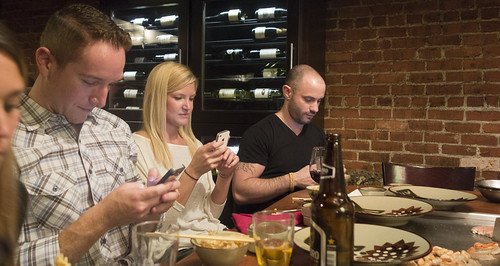 Welcome to Word Buzz Wednesday, in which we round up our favorite buzzworthy words of the week. The latest: sleeping while learning; snubbing while phoning; pubbing while corporate.

“The work, published in Ecology and Evolution, suggests that this tropical warbler had undergone speciation in reverse, or despeciation.”

Despeciation is the “rare instance where multiple species [have] merged back into one,” and occurs “under certain circumstances, such as human alteration of habitat.” It’s thought that the ancestors of the tetraka, a songbird from Madagascar, “became separate species when the climate was drier, and then came back together when the forests linked up again.”

More common than despeciation is speciation, the “evolutionary formation of new biological species, usually by the division of a single species into two or more genetically distinct ones.”

“The idea of a Dyson sphere began as a thought experiment, based on the idea that technological civilisations gradually look to harness more energy.”

Andrew Griffin, “‘Giant alien megastructure found in space’: What is a Dyson sphere, and what else could we have found?” The Independent, October 15, 2015

A Dyson sphere is “a huge shell structure that would sit entirely round a star, collecting all of the energy that comes out of it,” and is named for Freeman Dyson, “a theoretical physicist who popularised the idea but has said that he wished it didn’t have his name.”

Scientists have recently spotted what some say might be “alien megastructures” around a star, but which might merely be a huge cloud of space dust.

“Scientific consensus soon concluded that the sleeping brain was incapable of absorbing outside information, and hypnopaedia was consigned to the realm of quackery.”

Hypnopaedia is learning or teaching while sleeping. The idea has gone back “at least to biblical times,” says Aeon, but the term seems to have been coined by Aldous Huxley in his 1932 novel, Brave New World: “The principle of sleep-teaching, or hypnopædia, had been discovered.” The word combines the Greek hypnos, “sleep,” and paideia, “education, child-rearing.”

Aeon also says that hypnopaedia was all the rage about 100 years ago, “ending only after neuroscientists determined it was physiologically impossible.” But now research has suggested that hypnopaedia may have some validity after all.

“The team developed the ‘Partner Phubbing Scale,’ which they believe is significant for demonstrating that phubbing is ‘conceptually and empirically different’ from attitude toward cellphones, partner’s phone use, phone conflict and phone addiction.”

Katrina Pascual, “What Is ‘Phubbing’? Here’s How This Cellphone Habit Can Ruin Your Relationship,” Tech Times, October 3, 2015

Phubbing is the act of ignoring someone in favor of perusing one’s mobile device — in other words, snubbing by phone. The term was coined in 2012 by an ad agency with the purpose of marketing the Macquarie Dictionary of Australia.

Phubbing has resurfaced recently due to a study from the Hankamer School of Business of Baylor University, which found that phubbing may damage romantic relationships and increase depression.

“Though British pubcos tend to assume names suggestive of either boozy bonhomie (Punch Taverns, Faucet Inns) or basic vigour and drive (Enterprise Inns, Admiral Taverns) they are as a rule cheerless, lumbering concerns.”

Pubcos are large pub-owning companies that came into dominance in the 1990s. The term plays off telco, a large telephone company, which originated in the late 1970s.