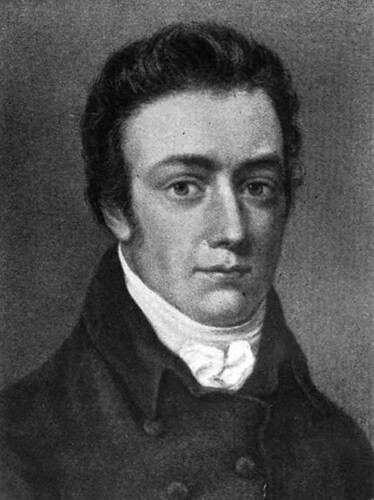 Poet and critic Samuel Taylor Coleridge was born on this day in 1772.

A leader of the British Romantic movement, Coleridge’s most famous poems include “The Rime of the Ancient Mariner,” which originated the idea of an albatross as a burden or obstacle; “Kubla Khan,” which popularized Xanadu meaning a magnificent and luxurious place (and inspired a terrible Olivia Newton-John movie); and “Christabel,” which some critics call a vampire story.

Coleridge was also fond of creating new words, many of which we still use today. Here are 10 of our favorites.

“To make our Feelings, with their vital warmth, actualize our Reason.”

“The Friend,” The works of Samuel Taylor Coleridge: prose and verse, 1809

Corporate executives can thank poet Coleridge for verbifying the adjective actual. The psychology term self-actualization, or the realization of oneself, is from 1939, according to the Oxford English Dictionary (OED).

“In any given perception there is a something which has been communicated to it [the mind] by an impact, or an impression ab extra.”

Biographia Literaria; Or, Biographical Sketches of My Literary Life and Opinions, 1817

The earliest sense of impact is from about 1601, says the OED, with the meaning “to press closely into or in something.” In 1781, it also came to refer to the act of one body colliding into another. Coleridge’s figurative sense, “the effect or impression of one thing on another,” is from 1817.

“But the will itself by confining and intensifying the attention may arbitrarily give vividness or distinctness to any object whatsoever.”

Coleridge includes an explanation slash apology for his neologism:

I am aware that this word occurs neither in Johnson’s Dictionary, nor in any classical writer. But the word ‘to intend,’ which Newton and others before him employ in this sense, is now so completely appropriated to another meaning, that I could not use it without ambiguity.

As so he created his own word, as one should.

“What is the whole system from Philo to Plotinus, and thence to Proclus inclusively, but one fanciful process of hypostasizing logical conceptions and generic terms? In Proclus it is Logolatry run mad.”

This word that means “a blind regard for words or verbal truthfulness” should definitely be used more often (especially during this election season). Logolatry combines the Greek logos, “word,” and latreia, “worship.”

“Of course, I am glad to be able to correct my fears as far as public Balls, Concerts, and Time-murder in Narcissism.”

Coleridge’s sense of narcissism is “excessive love or admiration of oneself,” and is based on the Greek myth of Narcissus, a beautiful young man who falls in love with his own reflection in a pool of water, only to drown in that same pool. The flower that grows in his place is named for him.

Narcissism as a psychology term — “characterized by self-preoccupation, lack of empathy, and unconscious deficits in self-esteem” — originated in 1905 from the German Narzissismus, which was coined in 1899 by by German psychiatrist Paul Näcke.

“Why, ’tis almost as bad as Lovell’s ‘Farmhouse,’ and that would be at least a thousand fathoms deep in the dead sea of pessimism.”

Coleridge’s use of pessimism is borrowed from the French pessimisme, which comes from the Latin pessimus, “the worst.” Pessimism is modeled on optimism, which is from 1759.

“In every religious and moral use of the word, God, taken absolutely, that is, not as a God, or the God, but as God, a relativity, a distinction in kind ab omni quod non est Deus.”

“Ant tribes, with their commonwealth and confederacies, their warriors and miners, the husband-folk, that fold in their tiny flocks on the honeyed leaf, and the virgin sisters with the holy Instincts of Maternal Love, detached and in selfless purity.”

Almost 200 years older than selfless is selfish, which combines self and the Old English suffix –ish. The word selfish was apparently coined by Presbyterians.

“In order not to be miserable, you must have a Soul-mate as well as a House or a Yoke-mate.”

Wise words, S.T. While Coleridge coined this term in an 1822 letter to an unidentified “young lady,” the use of soulmate didn’t take off until the 1980s, although it’s not clear why. Perhaps it was due to a 1980 edition of Carl Jung’s The Archetypes and the Collective Unconscious which mentions man having a soul-mate “somewhere in the upper world.” Another possibility is the 1980s expansion of the New Age movement. Or maybe it was all those romcoms.

Coleridge might have coined the term in light of his own unhappy marriage. When the woman he actually loved became engaged, he married another and spent much of the marriage away from his probably equally unhappy wife.

“A semblance of truth sufficient to procure for these shadows of imagination that willing suspension of disbelief for the moment, which constitutes poetic faith.”

Biographia Literaria; Or, Biographical Sketches of My Literary Life and Opinions, 1817

The term suspension of disbelief refers to an audience’s “voluntary withholding of scepticism,” says the OED, “with regard to incredible characters and events.” In other words, sure there’s no such thing as zombies, but Walking Dead fans are willing to suspend their disbelief to have their pants scared off them.