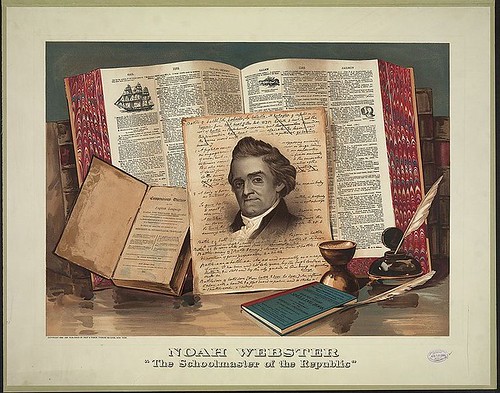 American English didn’t always have its own dictionary. At first the reference books were imported from England, says the Daniel Boone Regional Library, and when the first dictionary that included “new words, peculiar to the United States” was published in 1800, linguists panned it, considering American English “barbarous.”

To honor what’s considered the first major American English dictionary and the man behind it, lexicographers and word lovers celebrate Dictionary Day every October 16, which also happens to be Webster’s birthday.

There are myriad word-nerdy ways to kick up your linguistic heels. As our founder Erin McKean jokingly suggests, you can place your dictionary stand (everyone has one, right?) “by the hearthstone,” hoping that Noah himself magically comes down the chimney and leaves you “a shiny new dictionary” (the Assistance League of Los Gatos-Saratoga in California did just that for underprivileged kids, only without the hearthstones).

You can also make like Mr. Verb and fete a favorite tome such as the Dictionary of American Regional English (DARE). If food and words pique your appetite, you can follow suit with Feast and Phrase who will be “exploring food in the world of words” and making delicious “gastrolexical discoveries.”

Like Hugo of Helsinki you might take the day to update your “New to me” word list, or like teacher Michelle Jewett go out of your way to partake in education. For Michaela Lee, Dictionary Day will be all fun and games, and for Brian Krisch a day of doodling. Meanwhile, Non Talbot Wels is going to be, as always, “standing up to censorious twits.” Rock on.

Also consider a Dictionary Day-Halloween mash up like lexicographer Toma Tasovac who apparently will be “dressing up as Samuel Johnson and randomly accosting senior citizens for looking up naughty words” (pictures, Toma, or it didn’t happen), although we’re sure the Strong Language blog would be there to defend those raunchy retirees.

(Ir)regardless, you’ll want to heed Baltimore Sun editor John McIntyre and learn a thing or two about the differences between different dictionaries (in other words, there’s no such thing as THE DICTIONARY), what dictionary compilers actually do (they’re “not bouncers but custodians”), and while you’re at it, take your favorite lexicographer out to lunch (please, though, no alphabet soup).

If you’re a total Noah Webster-fan person, you can visit his birthplace and childhood home in West Hartford, Connecticut, where, by the way, the original copy of Samuel Johnson’s dictionary with notations by Webster is currently on display (cue lexiphilic heads exploding everywhere).

But, as Erin suggests, Dictionary Day isn’t necessarily about celebrating the physical book itself but the words inside, regardless of the container. So you might want to revel in your favorite word by tweeting it over at HaggardHawks Words all month! (Why not consider giving it a home for a whole year?)

How will you be celebrating Dictionary Day?