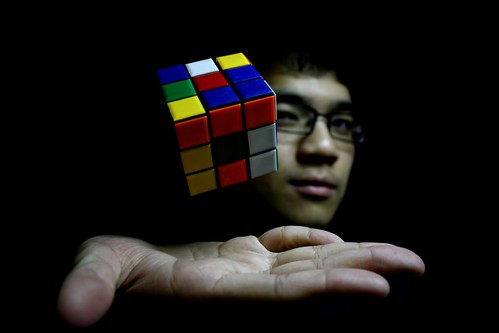 Welcome to Word Buzz Wednesday, in which we round up our favorite buzzworthy words of the week. The latest: speaking chatbot; a bikini for your face; the fastest cubers in the west.

“To be technical, Sophia is an ‘echoborg’ – a living, breathing person who has temporarily given themselves over to become a robot’s mouthpiece.”

Researchers at the London School of Economics wanted to explore how “body and appearance of artificial intelligence can shape our perception.” To do so, they set up echoborgs, people who are fed chatbot speech through earpieces, and speak only in chatbot.

The researchers were inspired by psychologist Stanley Milgram’s work on cyranoids, people who were fed speech from other people and repeated their words, the way Christian repeats Cyrano de Bergerac’s words to Roxanne.

As for the word echoborg, echo is Greek in origin while borg is short for cyborg, a blend of cybernetics and organism. Cyborg was coined by Austrian neuroscientist Manfred Clynes.

“Ever more Chinese women are embracing the ‘facekini’ to protect them from the sun and the threat of a tan on a trip to the beach.”

“Women in China have started wearing ‘Facekinis’ on the beach to keep their skin pale,” Business Insider, July 27, 2015

The facekini is a kind of mask worn to protect the face from the sun. The word riffs on bikini, which is French coinage, says the Online Etymology Dictionary, and might be named for the island of Bikini, site of a U.S. A-bomb test, with the idea that, like the A-bomb, the two-piece swimsuit is “explosive.”

The bi- of bikini has been incorrectly thought of as the prefix bi- meaning two, hence the formation words such as facekini and monokini (which originally referred to bikini bottoms worn without the top but now also seems to refer to a one-piece suit with cutouts).

“They called themselves ‘Holmies,’ and as they awaited the next glimpse of Holmes in court, they constructed a digital daydream of who he might be.”

Holmies (a play on homey) are what “fangirls” of Aurora theater shooter James Holmes call themselves. Fans of serial killers and murderers have long existed. There’s an even a word for that sexual fascination some have with criminals: hybristophilia, which comes from the Greek hybris, “wanton violence, insolence, outrage,” and philein, “to love.”

These hybristophilic nicknames — Unabuffs, Columbiners, and Lanzies are a just a disturbing few — are most likely modeled after more traditional (and non-crazy) fandom monikers.

“It’s about getting to what people call ‘left of boom.’”

Left of boom is a military term that refers to the “effort to disrupt insurgent cells before they can build and plant bombs,” as well as, according to The NY Times, the examination of “wide areas where bomb-making components are stored ‘before they’re live.’” Right of boom is the “military’s effort to mitigate effects of IED [improvised explosive device] attacks with better equipment, trauma care.”

“To solve the cube, one must arrange its tiny squares in such a way as to make each of its faces in a single, solid color — and to win at speedcubing, you’ve got to do it fast.”

Speedcubing is all about solving a Rubik’s Cube really, really quickly, and often in a competition. The term plays off other speed- words like speedwriting, speed-reading, and speedwalking.