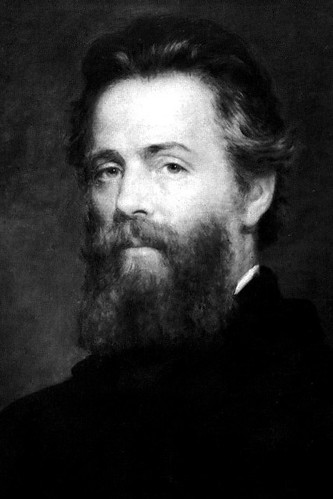 American writer Herman Melville was born on this day in 1819. His experience as a sailor on a merchant ship and on an 18-month whaling voyage provided fodder for his most famous novels, including Typee, Omoo, and of course Moby Dick.

Such seafaring accounts put into print nautical slang and lingo perhaps only previously heard among sailors, but the one-time teacher and customs agent has also given us a few surprising gems we still use today.

“Be off wid ye thin, darlints, and steer clear of the likes of this ballyhoo of blazes as long as ye live.”

Omoo: Adventures in the South Seas, 1847

While not currently in use, ballyhoo of blazes definitely should be. While the Oxford English Dictionary (OED) omits a definition, we’re guessing it means a “slovenly ship,” or ballyhoo, from the blazes of hell.

The word ballyhoo may be a variant of ballahoo, which is Caribbean in origin and refers to a fast-sailing schooner. However, ballyhoo meaning sensational publicity or a noisy uproar seems to be unrelated, and might instead come from the Irish English word for “hell,” ballyhooly, which itself could come from Ballyhooly, a village in County Cork, which according to the OED, was “formerly notorious for faction fighting,” although this might be a back-rationalization.

“Therefore you must not, in every case at least, take the higgledy-piggledy whale statements, however authentic, in these extracts, for veritable gospel cetology.”

Cetology is that branch of zoology which studies cetaceous animals such as whales, porpoises, and dolphins. The word cetology comes from the Latin cetus, “any large sea creature,” which comes from the Greek ketos, “a whale, a sea monster.”

“It was in the midst of this repose, that Archy, one of the cordon, whose post was near the after-hatches, whispered to his neighbor, a Cholo, the words above.”

That’s right, Herman Melville was the first, on record at least, to use Cholo in English. However, he doesn’t use it with the sense of a derogatory term for someone perceived to be a lower-class Mexican, or a Mexican or Latino gang member, but to refer to “an Indian or mixed-race person of Latin America.” This sense of cholo might come from the Nahuatl xolotl, “dog, mutt.”

“But be easy, be easy, this here harpooneer I have been tellin’ you of has just arrived from the south seas, where he bought up a lot of ‘balmed New Zealand heads (great curios, you know), and he’s sold all on ’em but one.”

A curio is an unusual or odd piece of art or bric-a-brac, and is short for “curiosity.” Bric-a-brac are “small, usually ornamental objects valued for their antiquity, rarity, originality, or sentimental associations.” The word comes from the French bric-à-brac, “expressive of confusion.”

“It is a witchery of social czarship which there is no withstanding.”

The word czar is, of course, Russian in origin, but ultimately  comes from the Latin Caesar, “Emperor.” The title czar was first adopted by the Russian emperor Ivan IV in 1547.

The figurative meaning of “person with dictatorial powers” is from 1866, says the Online Etymology Dictionary, and initially referred to President Andrew Johnson.

“All the garish night-life of a vast thoroughfare, crowded and wedged by day, and even now, at this late hour, brilliant with occasional illuminations.”

Disco-lovers everywhere can thank the 19th-century author for this modern-sounding word referring to social activities and entertainment that take place at night.

“After listening to these plum-puddingers till nearly eleven o’clock, I went up stairs to go to bed.”

Plum-puddinger refers to either a whaling ship that goes out on short voyages or a crew member on such a ship. While Melville’s is the earliest recorded use of this term, we assume it was common in nautical vernacular before then.

The plum-puddinger is so called because “because the crew has fresh provisions and an abundant supply of plum-pudding,” a staple apparently for 19th-century shipmen.

“It is called slobgollion; an appellation original with the whalemen, and even so is the nature of the substance.”

Slobgollion is whaling slang for a substance found in sperm whale oil, says the OED. In Moby Dick, Melville describes such a substance as “an ineffably oozy, stringy affair,” which is obtained “after a prolonged squeezing, and subsequent decanting.”

While the origin of slobgollion is unknown, earlier meanings of slob include mud or slime, while the second part of the word could be influenced by gullion, a mean and worthless wretch, or gollin, a kind of fish.

A variation is slumgullion, which in addition to fish offal refers to a cheap and watery drink — first used by Mark Twain in Roughing It — as well as a kind of thin stew.

“Ye wouldn’t have been to sea here, leadin’ this dog’s life, if you hadn’t been snivelized…Snivelization has been the ruin on ye.”

Snivelization is another Melville creation we should begin using immediately. The OED defines the term as “civilization considered derisively as a cause of anxiety or plaintiveness” — in other words, you’re a sniveling whiner because you’re too civilized. The word snivel originally meant to run at the nose.

“When all were pleasantly seated beneath the canopy…Media proposed that, for the benefit of the company, some one present, in a pithy, whiffy sentence or two, should sum up the character of the Tapparians.”

Whiffy meaning “having a bad smell” comes from whiff, which could refer to a slight gust of wind, a passing odor, or an intake of breath. In baseball, whiff means to strike out, and in sports in general, to swing and miss.