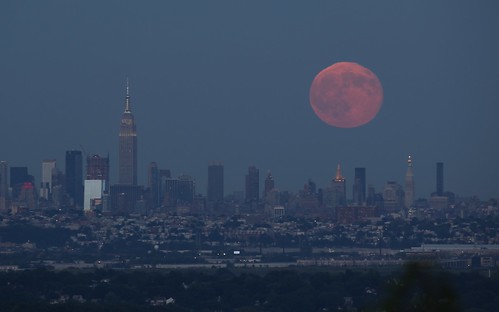 Welcome to Word Buzz Wednesday, in which we round up our favorite buzzworthy words of the week. The latest: retire like Beckham; the snarky origins of blue moon; and a company off in lala land.

“But the Beckham effect, which significantly boosted both attendance and sponsorship revenue within MLS, hadn’t gone unnoticed by club owners.”

The Beckham effect refers to the effect “aging” soccer star David Beckham had on Major League Soccer when he joined an MLS team. Not only did popularity and revenue increase, but more top players who had aged out of English and European leagues came across the pond to play.

“It may be cold comfort to those disappointed at today’s white ‘blue moon,’ but there is such a thing as a blue-hued moon. It just requires volcanoes to spew ash into the sky.”

A blue moon is a second full moon in a month, which normally only has one. Two full moons in a month occurs only once every three years, says Quartz, hence, the phrase “once in a blue moon.”

But if this relatively rare moon isn’t actually blue, what’s up with the name? It all stems from a 16th century snarky remark from Cardinal Thomas Wolsey, who basically said that his peers were so intellectually stunted that they “would have you believe the moon is blue.” By the early 19th century, the meaning had shifted to mean an infrequent occurrence.

“On Thursday, the White House said it would review a public petition to extradite the American dentist after more than 100,000 signed it.”

To extradite someone means to give them up to “the legal jurisdiction of another government or country,” often for a crime. The word is a back-formation of extradition, which comes from the Latin ex-, “out of,” and traditio, “a handing over.”

“In India, I learned about the concept of a ‘Lala Company’ — an enterprise where the owner of business rep refuses to take advice or suggestions that don’t automatically square with his own ideas.”

Jeff Lewonczyk, “I went to India, and all you got were these lousy cartoons,” Quartz, August 1, 2015

Lala company seems to be a uniquely Indian term which refers to a company run by one person who makes all the decisions; doesn’t have “much of office norms and rules”; nor proper facilities for its employees.

This blogger jokingly distinguishes a lala company from a “professional company,” and is surprised at the number of companies with lala in their name, although he understands that they “do not know [the word’s] derogatory implication in the Indian context.”

However, we couldn’t find what exactly lala means. Lewonczyk’s depiction shows a CEO type intoning, “La la la! I can’t hear you” with his fingers in his ears, which is funny but a western interpretation. Dictionary.com says Lala is a form of address in India, similar to “Mr.” — one can imagine employees constantly acquiescing to the big Mr., the CEO — while a poster on this forum says that in Sanskrit lala means “cajoling.” A lala company might be one in which the head honcho needs to be constantly cajoled.

“These bits of tissue, called organoids because they mimic some of the structure and function of real organs.”

The word organoid means resembling an organ and not, as the headline would imply, a mini organ, although the distinction is blurry. The suffix –oid means “like that of.” Hence, an android is only like a man, and a factoid is only like a fact when, in fact, it’s not.