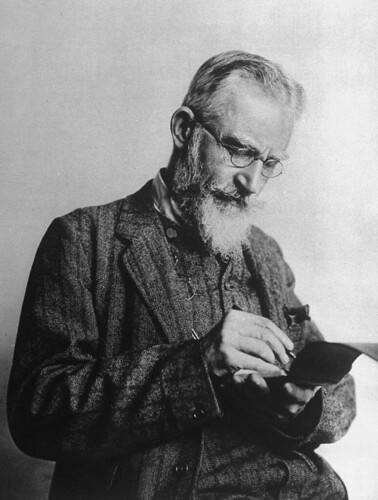 Irish playwright, literary critic, and co-founder of the London School of Economics, George Bernard Shaw was born this week in 1856. While perhaps most famous for his creation, Pygmalion, Shaw (who by the way hated “George” and preferred “Bernard”) is also the creator of dozens of words. Here are 10 of our favorites.

“If a historian is an Anti-Feminist, and does not believe women to be capable of genius in the traditional masculine departments, he will never make anything of Joan, whose genius was turned to practical account mainly in soldiering and politics.”

The word feminist — someone who believes in equal rights for women — originated in English around 1852, according to the Oxford English Dictionary (OED), and comes from the French féministe. Shaw’s use of antifeminist appears in the preface of his play, Saint Joan, which is based on the life and trial of Joan of Arc.

“The more I think of that revolving business the less I see how it can be done… There will have to be a black-out.”

Blackout here is a theater term that refers to the sudden dousing of stage lights to show “the passage of time or to mark the end of an act or scene.”

“So much for Bardolatry!”

Bardolatry, one of our favorite words, refers to excessive worship of William Shakespeare, otherwise known as the Bard.

“Comstockery is the world’s standing joke at the expense of the United States.”

Anthony Comstock was the founder of the New York Society for the Suppression of Vice, an institution “dedicated to supervising the morality of the public.” It’s most remembered for its “opposition to literary works,” including Shaw’s play, Mrs. Warren Profession, which is about a former prostitute turned brothel owner.

Comstockery now refers to the censorship of any literature or expression thought of as “immoral” or “obscene.”

“The Execs will be safe, I should think, to sanction the expenditure.”

Shaw probably didn’t think he’d be contributing to corporate lingo. Not surprisingly the use of the word exec increased sharply after 1980 with the shift in American business from manufacturing to a service-based economy.

“Flagellomania has been victorious by seven votes to five on the Industrial Schools Committee.”

Flagellomania is a “mania” or penchant for getting flagellated or whipped. Shaw was adamantly opposed to capital punishment in school, and argued in A Treatise on Parents and Children that because society at the time was so accustomed to such a practice — had a penchant for it, you could say — “whippings” seemed acceptable and even preferable.

“Between the two lies all philosophic comedy, high and low, with its Faustuses, its Robert Macaires, its Affable Hawks, its Jeremy Diddlers, its common Joeys with red-hot poker and sausages.”

Dramatic Opinions and Essays, With an Apology, 1906

Shaw coined this common name for a clown as a shortening of Joseph Grimaldi, who some say was the greatest clown of the 19th century.

“The literary man..hardly able to believe that the conductor can be serious in keeping the band moodling on for forty-five mortal minutes before the singers get to business.”

Moodle here means “to dawdle aimlessly,” says the OED, and may be a blend of mooch and noodle, to improvise music in a haphazard way.

“We call the working men proles because that is exactly what they are.”

While George Orwell popularized this term for a proletariat or a member of the working class, Shaw was the one coined it. The word proletariat comes from the Latin prōlētārius, “belonging to the lowest class of Roman citizens.”

“Every generation produces its infant Raphaels and infant Rosciuses, and Wunderkinder who can perform all the childish feats of Mozart.”

Wunderkind translates from German as “wonder child.” Originally referring to a child prodigy, it now can mean any talented individual who achieves success and acclaim at a young age.