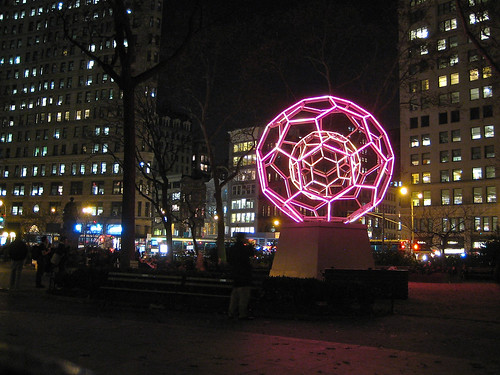 Welcome to Word Buzz Wednesday, in which we round up our favorite buzzworthy words of the week. The latest: a space puzzle solved; let’s get quarky; and ancient fast food.

“To prove buckyballs are the stuff in interstellar space, you’d want to see if they absorb light in a lab in the same way they do in space.”

Ever wonder what’s in the “wispy cloud of gas” that floats between stars? Astronomers sure have, at least since 1922 when Mary Lea Heger, an astronomy grad student, proposed that something was “absorbing specific frequencies of light coming from distant stars.”

In 1985, Harry Kroto, a chemist at Florida State University, and other scientists discovered a new form of carbon they called buckyball (full name, buckminsterfullerene) due to their resemblance to the geodesic domes Buckminster “Bucky” Fuller designed in the 1960s.

Kroto thought the buckyballs might solve the “space puzzle” of the wispy gas clouds, and his scientists friends in Switzerland agreed. They set out to help support his theory, which they finally did recently, at least enough for their own and critics’ satisfaction.

“While much of the attention on Jade Helm 15 has focused on conspiracy theories, Army planners have spent months quietly persuading private property owners and small-town leaders to welcome them to their communities.”

While we couldn’t find where the name of the military exercise comes from, we’re guessing it’s probably not from this poor woman with the real-life name of Jade Helm.

“For mirror-touch synesthetes like Salinas, that mental simulacrum is so strong that it crosses a threshold into near-tactile sensation, sometimes indistinguishable from one’s own.”

The general definition of synesthesia is “a condition in which one type of stimulation evokes the sensation of another,” such as sounds producing colors or odors. In mirror-touch synesthesia, synesthetes are “peculiarly attuned to the sensations of others.” For example, if one sees someone else get slapped, they might feel it on their own cheek.

“Scientists at CERN have announced that, using the Large Hadron Collider, they’ve discovered a new type of particle—the elusive pentaquark.”

A pentaquark is made of four quarks and an antiquark, and was “first predicted to exist in the 1960s.” It’s only recently that scientists think they’ve actually found it.

A quark is, in particle physics, “any of a group of six elementary particles having electric charges of a magnitude one-third or two-thirds that of the electron, regarded as constituents of all hadrons,” which is another class of subatomic particle.

According to the Oxford English Dictionary (OED), the six quarks are designated as up, down, strange, charm, bottom, and top. The top and bottom quarks were formerly known as the much more interesting truth and beauty.

As for the word quark, in 1964 U.S. physicist Murray Gell-Mann told OED editors he took the word from Finnegans Wake by James Joyce, who used it as a nonce word: “Three quarks for Muster Mark!” Another influence might be the German Quark, “curds, rubbish.” Quark is also a kind of soft, creamy cheese.

“These establishments have traditionally been called thermopolia, from a Greek work meaning something like ‘a place where hot things are sold,’ and they are thought to have been simple restaurants that resembled our own fast-food restaurants.”

Ancient Pompeiians probably didn’t use the term thermopolia, says Lucky Peach, but would have referred to these “fast food” joints as popinae. In Oscan, an extinct Italian language, popina means “kitchen.”