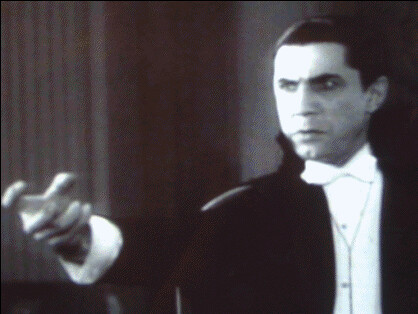 What comes to mind when you imagine a vampire accent (as we’re sure you often do)? Bela Lugosi perhaps, or Count von Count. We’ve found that the ways to “speak vampire” are about as varied as the ways to say the word.

Vampire has Slavic origins, and may come from the Kazan Tatar ubyr, “witch.” The Oxford English Dictionary cites the first appearance of the word in English in 1734, while there have been “scattered English accounts of night-walking, blood-gorged, plague-spreading undead corpses from as far back as 1196.”

Non-English accounts are even older. From Greek mythology we have lamia, “an enticing witch who charmed children and youths for the purpose of feeding on their blood and flesh.” The word probably comes from lemures, “the spirits of the departed considered as evil-disposed specters or ghosts.” Lemures also gives us lemur, named for its eerie appearance and nocturnal habits.

Also from Greek folklore we get vrykolakas, “generally equated with the vampire of the folklore of the neighbouring Slavic countries.” The word is derived from the Bulgarian word vǎrkolak, which is derived from another term that means werewolf. The dhampir is “a half-human half-vampire mythical hybrid creature” in Balkan folklore, and comes from the Arabian dham, “teeth,” and pire, “to drink.” In gypsy or Roma folklore is the mulo, literally “one who is dead.”

The soucouyant is “a night witch who sucks people’s blood, sheds her skin, and can turn herself into a ball of fire and fly,” and comes from West Indies Creole. In Caribbean folklore, the soucouyant is known as the loogaroo, which possibly comes from loup-garou, which you may remember from our werewolf post.

Now how about that vampire accent? The titular vampire in Bram Stoker’s quintessential bloodsucker novel lives in the “the Carpathian Mountains on the border of Transylvania, Bukovina and Moldavia,” basically in and around Romania. Aruguably the most famous film adaptation of the book is Dracula with Bela Lugosi. (The unofficial first film adaption of the book, Noseferatu, is silent, so we don’t get to hear Max Schreck’s vampire accent, or how he managed to speak around those pointy teeth.) Lugosi was Hungarian, not Romanian, and it’s Lugosi’s accent the vampire accent trope is based on.

The accents of film vampires after Lugosi are varied. In the Son of Dracula, Lon Chaney, Jr. sticks with his American accent (and morphs into an incredibly slow-moving bat). Christopher Lee keeps his British accent.

In the blaxploitation film Blacula, William Marshall, an American actor “trained in Grand Opera, Broadway and Shakespeare,” sounds rather Shakespearean as the African prince-turned-human leech.

New Jersey born and bred Frank Langella has a vaguely European accent in his Dracula rendition.

Count von Count of Sesame Street is modeled after Bela Lugosi’s Dracula (“Ah! Ah! Ah!“) and like many vampires has a bad case of arithmomania (this is based on the superstition that fishing nets and poppy seeds can keep vampires away because the vampires would be compelled to count the knots in the nets and the individual seeds).

Francis Ford Coppola’s 1992 version of Stoker’s novel stays true to form with a Hungarian accent from Gary Oldman (and a couple of bad British accents, courtesy of Winona Ryder and Keanu Reeves).

In Interview with the Vampire, Brad Pitt and Kirsten Dunst play American vampires so they speak with American accents while Tom Cruise speaks with a Tom Cruise-accent.

In the television show, Buffy the Vampire Slayer, vampires don’t have any particular accent, or rather they have the regional accents of wherever they’re from (Drusilla’s is Cockney, Spike’s is north London, while Angel‘s was Irish). The real interest is around the inventive slang of the Scooby gang.

Michael Adams (who teaches a course simply and awesomely titled, “Vampires”) has written extensively on “slayer slang” for VERBATIM magazine and in his subsequent book, Slayer Slang: A Buffy the Vampire Slayer Lexicon (both edited by Wordnik’s own Erin McKean), for example, X-free (“I’m destiny-free”), proper names as verb (“I cannot believe that you of all people are trying Scully me”), and adding the suffix –age to traditionally non-age words (saveage, sliceage, slayage). For even more on slayer slang, check out these posts from Language Hat (“Much?”) and Language Log (“X much”).

As for True Blood, some would argue the only accents are badly executed Southern.

For even more things vampire, check out Word Spy’s entries on vampire state, vampire time, and Twilight mom; go to Fritinancy’s blog and have some vampire wine; or get your degree from Transylvania University.

Next week, the devil made us do it.

One thought on “Vampire Vords (And Accents)”