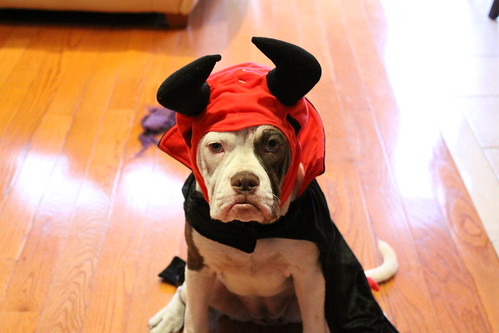 No Halloween series would be complete without a gander at the Prince of Darkness himself.

There is much to learn about the the Evil One. First, he has many names. The Century Dictionary definition alone has 11, including the prince of the powers of the air, Belial, the tempter, and the old serpent. Also, there are many words you might not know are related to devil. For instance, fiddlesticks sounds like something your grandmother would say, but did you know the Devil rode around on one, at least according to Shakespeare?

Finally, there’s devilish trivia up the wazoo. A baker’s dozen, a group of 13 (“from the former custom among bakers of adding an extra roll as a safeguard against the possibility of 12 weighing light”), is also known as a devil’s dozen, from the idea that 13 is the proper number of witches for the gathering of a Sabbath.

For the next couple of days, we’ll take a look at six names of the devil, six words you may not know are related to the devil, and finally six fun devilish facts. Six, six, and six – everyone comfortable with that?

The devil is perhaps best known as Satan, the “proper name of the supreme evil spirit in Christianity.” The word comes from the Greek Satanas, which comes from the Hebrew satan, “adversary, one who plots against another.” According to the Online Etymology Dictionary, “in biblical sources the Hebrew term the satan describes an adversarial role,” and “is not the name of a particular character.”

Some of us may not be able to think of Satan without also thinking of a certain special Saturday Night Live character. Then there’s the sugar-coated satan sandwich, Satanic fast food, and the devil-red drink, Satan’s whiskers.

Beelzebub was “a god of the Philistines”, who had a famous temple at Ekron, and “was worshiped as the destroyer of flies.” The word Beelzebub comes from the Greek beelzeboub, which comes from the Hebrew ba’al-z’bub, “lord of the flies.” Beelzebub is the name of “one of the fallen angels” in John Milton’s epic 17th century poem, Paradise Lost, and “was next to Satan in power.” The “lord of the flies” in William Golding’s novel refers to Beelzebub personified in the staked pig’s head.

Lucifer originally didn’t refer to the Evil One but was “the morning star; the planet Venus when she appears in the morning before sunrise.” The Biblical verse, “How art thou fallen from heaven, O Lucifer, son of the morning!” was interpreted as “a reference to ‘Satan,’ because of the mention of a fall from Heaven, even though it is literally a reference to the King of Babylon.”

The word Lucifer is Latin in origin and means literally, “light-bringing,” with lux meaning “light,” and ferre meaning “carry.”

Clootie comes from the Scottish cloot, ‘“a cloven hoof,” which the devil is said to have, as mentioned in works by Shakespeare and Sir Thomas Browns. Clootie also refers to “a piece of rag,” as well as the clootie dumpling, “a traditional dessert pudding. . .made with flour, breadcrumbs, dried fruit (sultanas and currants), suet, sugar and spice with some milk to bind it, and sometimes golden syrup.”

Davy Jones is said to be “the spirit of the sea; a sea-devil.” As we wrote in our pirate words post, the origin of Davy Jones is obscure. It may refer to David Jones, an actual pirate in the 1630s, or it may be an alteration of duppy, a West Indian term for a ghost or spirit. Or the word could refer to Jonah, “in the Bible, a prophet who was swallowed by a great fish and disgorged unharmed three days later,” and also “a person on shipboard regarded as the cause of ill luck.”

We’re cheating a little here and grouping a slew of Old X names, as does the Virtual Linguist in her post about the devil’s nicknames. There’s Old Nick, whose origin is obscure. The Oxford University Press blog says it may come nicker, “water sprite.” Grammarphobia says a possible origin is the first name of Niccolò Machiavelli, or it may be a shortened form of iniquity. What we might get from Old Nick is nickel, short for the German Kupfernickel, with Kupfer meaning “copper,”  and Nickel meaning “demon, rascal, from the deceptive copper color of the ore.”

Old Scratch is probably an alteration of  the Middle English scrat, “hermaphrodite goblin,” which comes from the Old Norse skratte, “wizard, goblin.” Old Harry seems to be a corruption of the Danish Old Erik or Old Erick, with Erik coming from Henrik. Old Erik refers to the “ninth century Erik, one of the oldest kings of the Scandinavian peoples.” When this king Erik became deified, a temple “erected to his honor and sacrifices offered to him,” Christians pronounced him an antichrist (which by the way doesn’t mean devil but someone instead of Christ). But that didn’t stop Old Erik – and therefore Old Henrik, and therefore Old Harry – from becoming a devilish synonym.

For even more devil names check out this list.