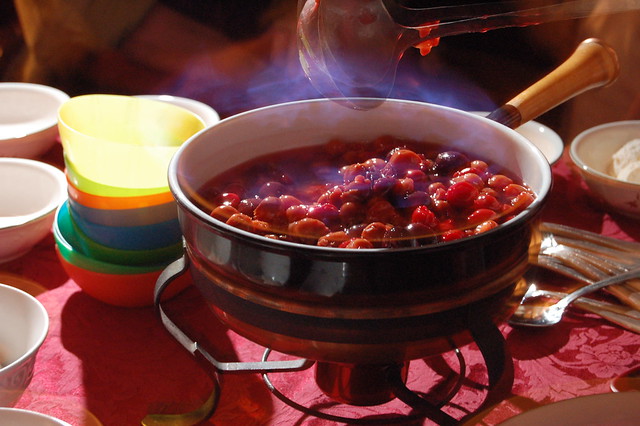 Cooking up some cherries jubilee.

It’s the end of the month so you know what that means: a roundup of the most interesting origins of foods celebrated in September. Last month we kicked things off with s’mores, sponge-cake, and chop suey. This time we have five more delicious food words and where they (might) come from.

“Perhaps the best of these [recent introductions to Hawaii] is the Macadamia Nut, sometimes called the Queensland Nut from its native habitat.”

The delicious macadamia nut (celebrated each September 4) was named after Scottish chemist and politician, John Macadam. At 28 he set sail from Glasgow to Australia, where he became friends with botanist Ferdinand von Mueller. Mueller was taxed with naming flora “discovered” by European settlers, and chose to name the nut-bearing tree after Macadam.

John Macadam shouldn’t be confused with John Loudon McAdam, the Scottish engineer who invented macadam, or Charles Macintosh, the Scottish chemist who created a method to make garments waterproof, such as his namesake, the mackintosh raincoat.

“The ‘hot dog’ was quickly inserted in a gash in a roll, a dash of mustard also splashed on to the ‘dog’ with a piece of flat whittled stick, and the order was fulfilled.”

A hundred and third plus years ago, you’d be lauding sausages served hot every National Hot Dog Day on September 10. That’s what the term hot dog originally referred to (with the popular, yet hopefully untrue, belief that sausage contained dog), says the Oxford English Dictionary (OED). It was also used as a mass noun. From a September 14, 1884 issue of the Evansville Daily Courier: “Even the innocent ‘wienerworst’ man will be barred from dispensing hot dog on the street corner.”

“Good Friday comes this Month, the old woman runs With one or two a Penny hot cross Bunns.”

Every September 11 honors the hot cross bun, which is  sweet and “marked on top with a cross of frosting, traditionally eaten during Lent.” The 1733 citation above is the earliest recorded, says the OED, and while “hot” is still always included in the name, it’s now usually served cold.

“When peas are used, rarely is the sauce poured over the linguine or fettuccelle.”

Every September 15, you can fete this long, flat pasta, the name of which comes from the Italian lingua, meaning “tongue.” The earliest recorded usage in English of linguine is 1920, according to the OED. From a U.S. Patent Office publication: “Macaronic Foods, Including Bombolati, Linguini, Foratini, [etc.].” Italian immigrants had been coming to the U.S. since the 1890s, and while immigration tapered off around 1920, says the Library of Congress, by then more than four million Italians had settled in the U.S.

“The Monte Cristo sandwich has always served as a sort of Rosetta Stone in my explorations of this planet.”

Like the eponymous count of Alexandre Dumas’s 19th-century novel, the origins of the Monte Cristo sandwich are shrouded in mystery. According to the Food Timeline, the battered and fried ham and cheese sandwich celebrated every September 17 is probably a variation of the croque monsieur, the term of which first appeared in English in 1915, says the OED. As for the Monte Cristo, Food Timeline says it was most likely “first served in southern California” and was “very popular in the 1950s-1970s.” However, what it has to do with a rich and enigmatic nobleman, your guess is as good as ours.

“Thursday, it was Beef Wellington and Cherries Jubilee, and enough Sevruga Caviar to make the QE2 one of the Russian’s largest single customers.”

Lauded every September 24, this decadent dessert is made up of cherries in a flaming brandy sauce served over vanilla ice cream. It was supposedly created for Queen Victoria’s jubilee celebration, says Food Timeline. However, what isn’t clear is if it was for her golden jubilee in 1887, celebrating the 50th anniversary of her accession to the throne, or her diamond jubilee in 1897, the 60th anniversary.

A jubilee can refer to a specially celebrated anniversary, a season of celebration, or rejoicing itself. The Online Etymology Dictionary says the word comes from the Old French jubileu, “jubilee; anniversary; rejoicing,” which ultimately comes from the Hebrew yobhel, meaning “jubilee” but formerly “a trumpet, ram’s horn,” or literally “ram.” The site goes on to say the original jubilee was a year of emancipation of Hebrew “slaves and restoration of lands, to be celebrated every 50th year,” and “was proclaimed by the sounding of a ram’s horn on the Day of Atonement.”