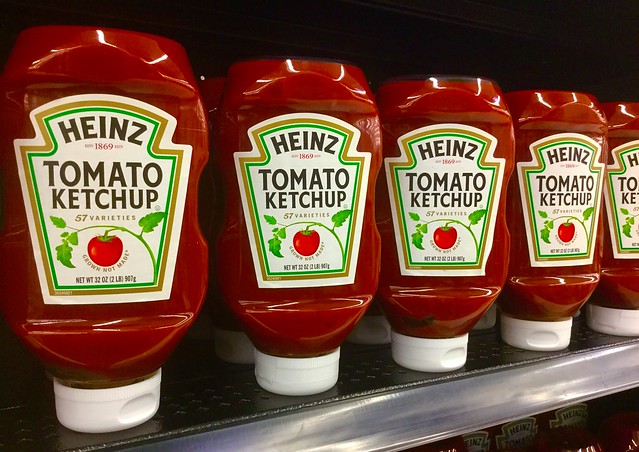 You might have heard that in recent years that the Oxford English Dictionary (OED) added several words from Singapore English into their corpus. A few of our favorites include blur or blur-blur, being slow in understanding; lepak, meaning to relax, loaf, or hang out; and shiok, meaning great, delicious, superb.

But how about common English words with Chinese roots? Today we take a look at 10 everyday English words you might not know come from Chinese languages, just in time for the Lunar New Year.

While ketchup may seem as American as the burgers and fries you slather it on, both the word and the condiment have Chinese origins.

The earliest citation for the word ketchup in English is from 1682, says the OED. It began as a kind of “piquant sauce produced in southeast Asia, probably made from fermented soybeans or fish.” The Malay word it might come from is kicap, “fish sauce,” from the Cantonese, kē-chap. Later ketchup referred to a sauce made in imitation of the fish sauce, “typically made from the juice or pulp of a fruit, vegetable, or other foodstuff combined with vinegar or wine and spices.”

In other words, ketchup wasn’t necessarily made with tomatoes, at least not at first. Back in the day, according to the Online Etymology Dictionary, the “most esteemed kinds” of ketchup were mushroom, walnut, and tomato, which emerged around 1800 in the U.S. and predominated from the early 20th century.

Now how about catsup? It’s just another pronunciation and spelling of the original Asian word, says Mental Floss. The OED says the variation came slightly after ketchup, around 1696, and that perhaps because of “influence from major commercial brands of sauce,” the latter became the dominant term in the mid 20th century.

Have a yen burger and fries now? You’ve got what was once known as a craving for drugs. The word yen probably comes from the Cantonese yan or Mandarin yin, of the same meaning. Yen-yen is U.S. slang for a opium hankering, says the OED.

According to Brainwashing: The science of thought control by Kathleen Taylor, xinao, which translates literally from Chinese as “wash brain,” originally referred to coercive persuasion tactics used under the Maoist government, which began in 1949. The English word, brainwashing, was first used in 1951, says the OED, referring to “the systematic and often forcible elimination from a person’s mind of all established ideas, esp. political ones, so that another set of ideas may take their place.”

This word meaning tip or gratuity comes from the Xiamen (formerly Amoy) Chinese dialect, says the OED. Kam-sia, “grateful thanks,” was apparently an expression of gratitude used by beggars.

While tycoon now means rich and powerful businessperson or magnate, it was once the title for a Japanese shogun. The Japanese taikun comes from the Chinese ta kiun, “great prince.”

A literal and figurative act of servile deference. In Chinese culture, to kowtow, or kòu tóu, refers to the custom of touching one’s forehead to the ground as a form of “respect, submission, or worship,” says the OED. In English kowtow also refers to acting in an obsequious manner or an obsequious act.

The origin of this term for a quick survey is described by the OED as either “a borrowing from Chinese Pidgin English” or “formed within English.” Look-see started as a verb (from 1862: “I went up to ‘look see’, and found that they were working away admirably”) although that usage is now rare. The earliest use as a noun is from 1876.

This phrase meaning “No go” or “Not possible” might be a transliteration of the Mandarin bùkěyǐ. While no can do first appeared in English in 1868, says the OED, the positive version, can do, is earlier, from 1845. The noun sense is even earlier (1839) while the adjective, often referring to an optimistic attitude, is from 1926.

Gung ho meaning enthusiastic and dedicated originated as a motto of “certain U.S. Marine forces in Asia during World War II,” says the American Heritage Dictionary, and comes from the Mandarin gōnghé, “to work together,” an abbreviation of gōngyèhézuòshè, Chinese Industrial Cooperative Society.

“Chop-chop!” or “Hurry up!” might be a corruption of the Cantonese term for “rush,” gap gap, or the Mandarin kuai kuai, “quick quick.” This chop is apparently the same as in chopsticks, or kuai zi in Mandarin, “fast ones.” While chop-chop first appeared in English in 1834, says the OED, chopstick was first used much earlier, in 1699.