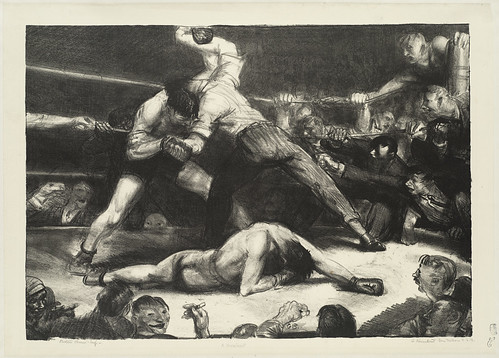 Welcome to Word Buzz Wednesday, in which we round up our favorite buzzworthy words of the week. The latest: a disappointing magic word; a school nickname; and a boxing word for politics.

“Jet lag may be ‘future shock’ at its most tangible, but when did it first emerge as an affliction? At what point did people start moving fast enough that it became an issue?”

The term future shock comes from the 1970 book of the same name by futurist Alvin Toffler and his (uncredited) co-author and wife, Heidi Toffler. The Tofflers define future shock as “the shattering stress and disorientation that we induce in individuals by subjecting them to too much change in too short a time.”

“Scientists have known about gene drives for many years. But they never had a good way to use them.”

Gene drive refers to the inheritance of genetic changes made as a result of genetic engineering. In the experiment described by NPR, brown fruit flies genetically engineered to be blonde went on to produce blonde offspring.

“Wolfe’s failure to address racial issues on campus over the past few months prompted students, faculty and lawmakers to call for his ouster. Monday morning, Wolfe acquiesced, saying he was resigning ‘out of love’ for the Mizzou students.”

Mizzou, the nickname of the University of Missouri, has been in use since at least 1905. The school is currently facing controversy with their treatment — or lack thereof — of racism on campus. A grad student went on a hunger strike while some football players threw their support behind him by “refusing to practice or play until [university president Tim] Wolfe was shown the door.” Wolfe resigned on Monday.

“J.K. Rowling has revealed that non-magic Americans are called ‘No-maj’ (pronounced ‘no madge’).”

Aramide Tinubu, “We Doubt The American Word For ‘Muggle’ Is Going To Be Added To The Oxford Dictionary Anytime Soon,” Hollywood.com, November 4, 2014

No-maj is the American English equivalent of the (far more interesting) British English muggle, which also refers to an old-timey drinking contest and is slang for a marijuana cigarette.

“Those below the 2.5 percent average in the polls could qualify for the so-called undercard debate, as long as they hit at least 1 percent in at least one of the four most recent national polls.”

Ashley Parker and Nick Corasanti, “Chris Christie and Mike Huckabee, in Blow to Their Campaigns, Are Cut From Main Debate Stage,” The New York Times, November 5, 2015

Originating from boxing, undercard refers to a lower-profile event that takes place before the main event. The term came about around 1926, says the Oxford English Dictionary.