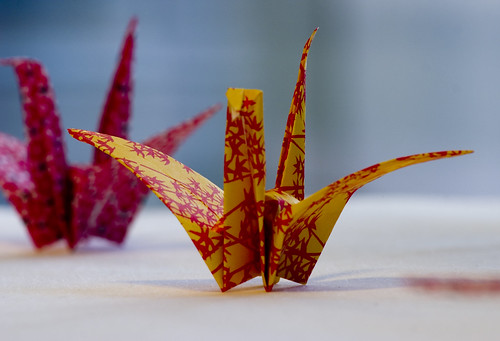 Happy Origami Day! Every November 11, origamists around the world celebrate their love for the art of folding paper by, well, folding paper. Whether you’re a beginner who can barely make a paper airplane or an origami master who can create a life-sized elephant from a single sheet of paper, we hope you’ll enjoy this selection of some of our favorite origami words.

Most origami starts with paper (unless of course you’re performing fabrigami). A basic inexpensive kind is kami, which translates from Japanese as “paper.” The –gami of origami is an alteration of kami. Ori, as you might have guessed, means “fold.”

Washi, which translates as “Japanese paper,” is a tough paper used in origami as well as other Japanese arts such as shodo or calligraphy. Elephant hide is a kind of paper that’s made in Germany.

Most origami designs start with a base, and there are lots of different kinds. The diamond, the fish, the dog, the frog. The water balloon, the bird, and the stretched bird.

The blintz is the base that resembles a pancake. To make a blintz base, all four corners of the paper are folded toward the center, and as a result rather resembles the blintz pancake. The word blintz is Yiddish in origin and comes from the Russian blinyets,  a diminutive of blin, “pancake.” Blini is another name for such a pancake.

The fudge factor is “a small gap deliberately left when folding to a crease…to make allowance for the thickness of the paper.”

Fudge has meant “to fit together or adjust in a clumsy, makeshift, or dishonest manner” since the 17th century, says the Oxford English Dictionary, and may be an ironic alteration of fadge, to suit or fit.

The Yakko-san might be one of the oldest designs in origami. According to Natural History Magazine, the Yakko was a kind of servant or guard who accompanied a daimio, or feudal lord, on excursions, ensuring ahead of time that “the people were properly prepared to greet the lord as he passed by.” The Yakko also seems to be a traditional design for Japanese kites.

Pajarita, Spanish for “little bird,” is a popular origami design in Spain. The word is a diminutive of pajaro, “bird,”and also refers to a bow tie.

These beautiful flower balls are a kind of “modular origami,” that is, origami made by connecting various individual pieces. The word translates from Japanese as “medicine ball” since in the past they were primarily used to hold incense.

In case you were wondering, the American medicine ball, a heavy leather ball used for exercise, is so-called because its inventor equated exercise and physical fitness with medication.

Due to a misreading of characters, the 19th-century Japanese origami instruction book, Kayaragusa, came to be referred to in the West as Kan-no-mado, which means “window on winter” or “window on the coldest season.” The book is known for including instructions on how to fold the notoriously difficult dragonfly.

An instruction book that predates Kan-no-mado is Hiden Senbazuru Orikata, or The Secret to Folding One Thousand Cranes, which purports to teach the folding of a thousand cranes from one sheet of paper. However, these seem to be merely pre-cut sheets connected after folding.

There are no lack of origami societies with interesting names. There’s BOGS, the British Origami Gourmet Society, which apparently practices paper-folding during meals, and Poppadom, which stands for People Out Practising Paperfolding And Dining On Masala, and is part of BOGS.

Our favorite however is the name of Japan’s origami society: Tanteidan, which translates as “detectives,” named for, we’re guessing, their practice of unfolding the mysteries of complex origami designs.