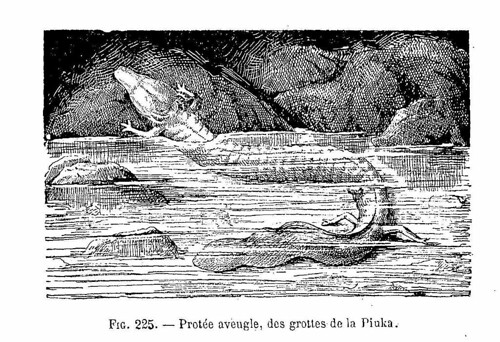 Welcome to Word Buzz Wednesday, your go-to place for some of the most interesting words of the week. The latest: willpower for everybody, the baby of dragons, a pun addiction.

“The authors called this effect ‘ego depletion’ and said it revealed a fundamental fact about the human mind: We all have a limited supply of willpower, and it decreases with overuse.”

While the idea of ego depletion in psychology has long been accepted, a recent study has shown a “zero-effect” for the phenomenon, says Slate, and “no sign that the human will works as it’s been described.”

“Just about everybody’s experienced this at one time or another, which underscores how important it could be to try to cut off generalized negative reciprocity before it starts.”

Generalized negative reciprocity is a fancy way of saying “somebody was mean to me so now I’m going to be grumpy and mean to everybody.”

“While technically an amphibian, the pink, eyeless, cave-dwelling olm bears a charming resemblance to a miniature fairy tale creature.”

Corinne Purtill, “A new generation of baby ‘dragons’ is about to hatch in Slovenia,” Quartz, March 9, 2016

According to Quartz, the hearty olm can live up to a century and “survive as long as a decade without eating.” As for the origin of the word, the Oxford English Dictionary says it’s uncertain although it might be a variant of the Old High German molm, “newt.”

The term Sandersnista, a blend of Sanders and Sandinista, refers to Bernie Sanders praising Sandinista leader, Daniel Ortega, in a 1985 interview.

“Mendez diagnosed him with a condition called Witzelsucht (addiction to wisecracking), brought on, it seems, by two strokes, five years apart.”

While many sufferers of Witzelsucht, which is caused by brain damage in the frontal lobes, find their own jokes hilarious, they often don’t respond to the jokes of others. The word Witzelsucht is German in origin.