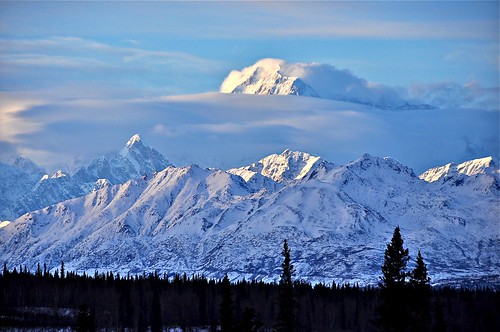 Welcome to Word Buzz Wednesday, in which we round up our favorite buzzworthy words of the week. The latest: go tell it on Denali; allergic to tech; Stonehenge on steroids.

“But ‘from the human point of view,’ The Economist notes, ‘the significance of the Cambrian explosion is that homo sapiens wouldn’t be here if it hadn’t happened.’”

The Cambrian explosion is essentially “biology’s Big Bang,” says Andrew Parker, a life science professor at London’s Natural History Museum. While no one knows why it happened, a few theories include: a sharp increase in water oxygen levels, new nutrients due to melting glaciers, and — the old evolutionary standby — a “catastrophic explosion.”

As for the name Cambrian, that comes from the Cambrian period, the “first geological period of the Paleozoic Era.” Cambria is the Latin name for Wales — which is “where Britain’s Cambrian rocks are best exposed” — and an alteration of Cumbria, which is itself an alternation of the Welsh Cymry.

“Alaska’s Mount McKinley was due to become Denali, its traditional name, used by locals and indigenous people, according to a news release from the White House.”

Denali is the traditional name for Mount McKinley and translates from Koyukon, the language of the Athabascan people of northern Alaska, as “the high one” or “the great one.”

“A French woman has won a court-ordered disability grant after claiming to suffer from a ‘gadget allergy’ due to electromagnetic radiation.”

“The recumbent stones became lost beneath a huge bank and were incorporated as a somewhat clumsy linear southern border to the otherwise circular ‘superhenge’ known as Durrington Walls.”

Superhenge refers to Durrington Walls, a “massive stone monument” recently discovered close to Stonehenge. Superhenge might be “the largest surviving stone monument, preserved underneath a bank, that has ever been discovered in Britain and possibly in Europe.”

“Temporal myopia may be largely due to [procrastinators’] high levels of stress which can shift their focus to more immediate rather than distant concerns.”

Temporal myopia refers to not having a clear picture of oneself in the future. According to The Wall Street Journal, procrastinators seem to experience a disconnect between their current decisions and actions and their future selves, which are often “more abstract and impersonal,” and to which they’re less emotionally connected.

The word myopia comes from the Greek muōpiā, nearsighted.