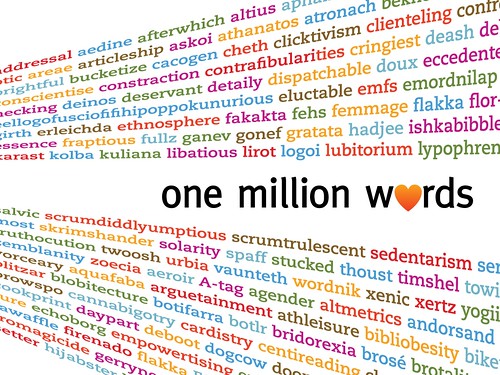 As you may know, Wordnik became a not-for-profit last year, and shortly afterwards, we launched our Adopt a Word program. Today we’re excited to announce we’re expanding our efforts through our Kickstarter campaign, Let’s Add a Million Missing Words to the Dictionary.

You’ve probably noticed that many words, especially neologisms, technical terms, jargon, and slang, are still missing from most standard dictionaries, and that it takes a long time for new words to be added. While Oxford’s online dictionary is updated regularly, the more traditional Oxford English Dictionary is another story. For instance, twerk, which Miley Cyrus popularized in in 2013, dates all the back to 1820 but was only added to the OED this past June.

In fact, a 2010 study published in the journal Science estimated that as much as 52% of the unique words of English are missing from major dictionaries!

Wordnik is different. We think every word should be lookupable. We believe that users of English are the best judges as to whether any particular word belongs in their vocabulary, and that examples of real use by real people are the best evidence to drive those decisions.

With this Kickstarter, we hope to give each and every one of these missing words a good home on the Internet.

How? First, we’ll find the words! We have lists of hundreds of thousands of words that have been looked up on Wordnik that we don’t have good data for. We’ll start with those.

Next, instead of taking a long time to write definitions for these words, we’ll look for definitions that have already been written — not in dictionaries, but by journalists and writers who found a cool word, and wanted to explain it to their readers. We call these “free-range-definition examples” (FRDs, or “Freds”).

Here’s a good example of a FRD, for the word echoborg, from a recent article in the BBC: “Sophia is an ‘echoborg’ – a living, breathing person who has temporarily given themselves over to become a robot’s mouthpiece.”

We already have thousands of these FRDs labeled and can use them as a training set to drive machine learning to find many, many more.

We’ll also update Wordnik so that any time a word is looked up that we’ve never seen before, we’ll kick off a search to find more data about it. We won’t limit ourselves to words that are more frequent than one-in-a-billion, either. If a word exists at all, we’ll show you what we can!

Of course all of this takes time, people-power, and your help. And there are so many ways you can do so!

To learn more, check out our Kickstarter page and video starring our fearless founder Erin McKean. We hope you join us in helping to find those million missing words.