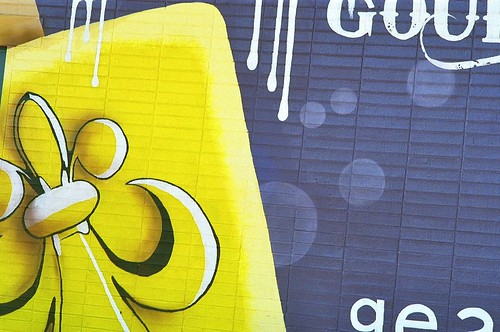 Welcome to Word Buzz Wednesday, in which we round up our favorite buzzworthy words of the week. The latest: impersonating a Roman officer; fleur-de-lis, not just for royals; can’t decide between pie and cake? you’re in luck.

“It spoke of the ‘inappropriate, insistent and sometimes aggressive’ behaviour of Centurions, who charge between €5 and €10 ($5.3-$10.6) for a photo.”

A centurion was a commander in the army of ancient Rome, so-called because he commandeered a company of 100 soldiers. The centurions of Rome today are impersonators of such soldiers and, as of this month, criminals in the eyes of the law.

“She ignored me and passed right by. ‘What year were you born?’ I called to her back. She kept walking, and replied ‘I’m almost a circle older than you.’”

In this context, a circle refers to a full 12-year cycle of Chinese zodiac animals.

“The practice of fleurdeliser (a verb meaning ‘to mark with the fleur-de-lis’) traveled across the waters to French-controlled colonies, including America.”

The fleur-de-lis wasn’t just an iris pattern used by the aristocracy (including the French royal family and government) but also a way to mark criminals or anyone “controlled by the French state,” says Jude Stewart in his book, Patternalia, An Unconventional History of Polka Dots, Stripes, Plaid, Camouflage, & Other Graphic Patterns.

“When Kelly called restaurant David Burke Fabrick’s piecaken (created by Executive Pastry Chef Zac Young), ‘Pretty much the greatest thing that’s ever happened to me, besides the birth of my children,’ the piecaken craze reached a fevered frenzy.”

The piecaken is a pie baked inside a cake. Its name is a play on turducken, a chicken inside a duck inside a turkey. While the piecaken recently gained popularity, Mashable says the word goes back at least three years.

The cherpumple, arguably the original turducken of desserts, originated as a three-layer cake baked with a cherry, pumpkin, and apple pie in each layer, and was invented by foodie mad scientist, Charles Phoenix.

“The brand name Taser has become as synonymous with these devices as Kleenex or Xerox have to photocopies and tissues – a quirk of language known as a ‘proprietary eponym’.”

Jamiles Lartey, “Where did the word ‘Taser’ come from? A century-old racist science fiction novel,” The Guardian, November 30, 2015

The word for any high-voltage stun gun comes from the weapon’s original manufacturer, Taser International. However, “Taser” doesn’t refer to the inventor of the gun. That would be Jack Cover, who created the name as a “loose acronym” of Tom Swift and His Electric Rifle, an early 20th-century science fiction YA novel.

The book mentions a “less lethal” electric gun as well as descriptions of Africans as “hideous in their savagery, wearing only the loin cloth, and with their kinky hair stuck full of sticks,” and as “wild, savage and ferocious … like little red apes.” Swift and his companions decide that the blacks “need to be controlled, guided or killed as determined by the more ‘civilized’ white outsiders.”