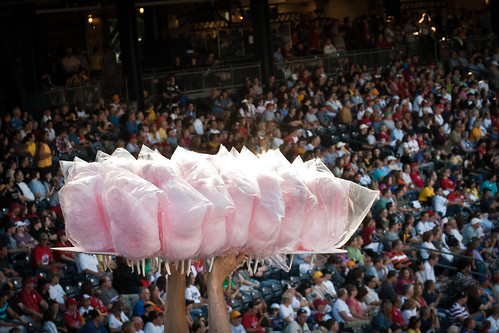 While National Cotton Candy Day is celebrated on December 7 in the U.S., the brightly-colored ethereal sweetness is enjoyed any time all over the world, and under many different names. Here we take a brief look at the history of those names.

Before cotton candy, there was spun sugar. According to How Stuff Works, 15th-century Italian pastry chefs were geniuses with the stuff, creating entire scenes from golden syrup drizzled from broom handles.

However, because spinning sugar by hand was such an arduous task, the sweet treat didn’t hit the masses until John C. Wharton, a candy maker, and William J. Morrison, a dentist (you read that right) designed a machine to speed up and automate the task. The inventors dubbed the light and airy result fairy floss, which made its debut at the 1904 World’s Fair in St. Louis.

By the mid-1920s, the sugary concoction came to be known in North America by the name we all know, cotton candy, although it’s still referred to as fairy floss in Australia and New Zealand. (In Sydney, you can also get your hands on fairy floss ice cream.)

In British English, the toothsome treat retained the floss portion of fairy floss and took on candy. The earliest citation for candy-floss in the Oxford English Dictionary (OED) is from 1951, while in South Africa the gossamer goody is known as tooth floss, which sounds like dental floss’s evil twin.

Some other languages follow, like American English, the cotton route. In Spanish the term is algodón de azúcar, “sugar cotton.” The Polish version is wata cukrowa, also “sugar cotton,” while in Italy it’s known as zucchero filato, or “sugar thread.”

In Korean, it’s somsatang, where som means “cotton,” and satang, “candy,” while in Japanese, watakashi  — cotton (wata) candy (kasha) —  is also the surname of a “character” associated with Utau, a Japanese singing synthesizer application, named perhaps for a sweetness so light she almost doesn’t exist.

The Dutch take a different spin on their name for spun sugar. Suikerspin translates as “sugar spider,” where suiker is sugar and spin is spider. The English word spider ultimately comes from the Proto-Germanic spin-thron-, literally “the spinner.”

What else does this delicate delight resemble besides cotton? How about Dad’s bushy facial hair? Or at least that might have been the thought process of whatever French person came up with barbe à papa, or papa’s beard. Barbe à papa is also the inspiration for a series of children’s books called Barbapapa, which is about a pink, amorphous character trying to fit in, as well as perhaps the Japanese cream puff chain, Beard Papa’s.

A Persian sweet similar to cotton candy is pashmak, which translates as “wool-like.” Pashmak is made from sesame oil and sugar and is supposed to resemble sheep’s wool. A Chinese version is dragon’s beard candy, which in addition to spun sugar contains peanuts, dried coconut, sesame seeds, and glutinous rice flour. Why dragon’s beard? In Chinese art, the lucky mythical creature is often depicted with wispy chin hair.

By now, you might be craving a pink puff, and we say have at it. Just be sure to floss afterwards, and not with the sugary kind.