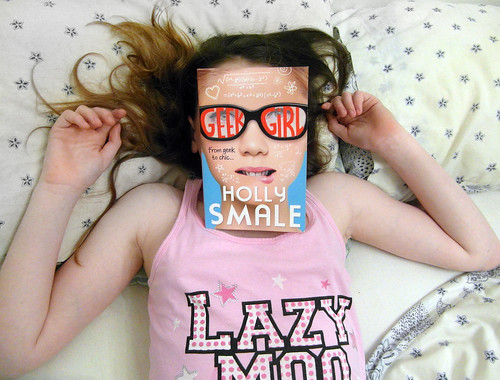 Welcome to Word Buzz Wednesday, in which we round up our favorite buzzworthy words of the week. The latest: of faces, bods, and friendly texts.

“The best bookfaces are carefully planned and staged. Ray Delara, a library assistant in Burlingame and the photographer behind the triple-bookface post, takes the endeavor seriously.”

Rachel Kramer Bussel, “Oh, Those Clever Librarians and Their #Bookface,” The New York Times, May 1, 2015

Bookface photos involve “strategically lining up your face or another body part alongside a book cover that features a matching body part so that there appears a melding of life and art.” A triple-bookface incorporates three different people posing with three different books in one photo.

Although The New York Times says the bookface hashtag was started by NYPL information architect Morgan Holzer in August 2014, we found many older uses in Flickr.

Other –face blends often used as hashtags include quakeface, duckface, and rageface.

“Fratbod leads to dadbod, I feel. All those brews add up.”

“It is the latest in a series of synthetic drugs that include Ecstasy and bath salts, but officials say flakka is even easier to obtain in small quantities through the mail.”

Flakka is a designer synthetic drug along the lines of Ecstasy and Molly. The word flakka is “a derivative of the Spanish word for a thin, pretty woman,” says AP, and  “is usually sold in a crystal form and is often smoked using electronic cigarettes, which are popular with young people and give off no odor.”

“Elizabeth Schulte, one of Kelly’s frexting friends, is comfortable sending sexy selfies to her girlfriends, but not her fiance. Because with men, the contract is different.”

A frext is a sext sent between friends, usually female.

Like lumbersexual, frext is sort of blend of a blend, where the meaning at face value is different than the term’s actual meaning. In other words, lumbersexual should mean someone who’s sexually attracted to lumberjacks (or lumber for that matter), just as heterosexuals are attracted to those of the opposite sex (hetero-). Instead lumbersexual plays off metrosexual, and refers to a man who’s stylish in a beardy, plaidy way.

Frext at face value should mean a text from a friend or a friendly text, blending friend and text. Instead it blends friend and sext, which is itself a blend of sex and text.

“The title of that critical analyst note was a word that expressed infinite disappointment: ‘Ungood.’”

Ungood, which means, rather obviously, “not good” or “bad,” has been around since the second century, says the Oxford English Dictionary. It may have regained popularity in the 1940s with George Orwell’s 1984, in which ungood is an example of euphemistic Newspeak.