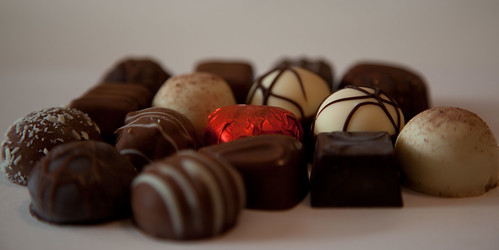 Welcome to Word Buzz Wednesday, in which we round up our favorite buzzworthy words of the week. The latest: authentic chocolate; screen time senility; and the Donald gets disgusting.

“The best-known craft chocolate bar makers in the country—celebrity beardo Brooklyn chocolate sellers the Mast Brothers—admitted in the New York Times today they’d been remelting industrial chocolate from other vendors and reselling them as ‘bean to bar’ chocolate.”

Willamette Week describes bean to bar chocolate as “the cacao equivalent of single-source coffee roasts.” As Slate describes it, the process starts with raw cacao beans and involves “painstakingly roasting, grinding, and tempering them into chocolate bars in small batches.”

The term is reminiscent of another foodie phrase, nose to tail, referring to eating every part of an animal, from snout to stub.

“Forgotten something? The problem may not be age but your smartphone or other similar device. And brain health experts have even coined a name for the condition: digital dementia.”

German neuroscientist Martin Spitzer, author of Digital Dementia: What We and Our Children Are Doing to Our Minds, says that using a computer is the equivalent of “outsourcing your mental activity.” While this might be fine in moderation for adults, children also need time for unstructured play.

“Unless you have some knowledge of medieval Islamic theology you probably have no idea what irja means.”

You’re right, Mr. Akyol! But luckily you’re here to tell us. Irja translates literally as “postponing,” and was a “theological principle put forward by some Muslim scholars” in the first century of Islam, as the result of a major civil war being fought during that time.

The proponents of irja — known as murjia, or “postponers” — asserted that the “burning question of who is a true Muslim should be ‘postponed’ until the afterlife.” In other words, true faith was something that could only be judged by God and not other humans. In the end, however, the murjia didn’t have enough influence in the Muslim world.

“The ready to radicalize population is overwhelmingly young and male. Usmani calls them ‘Jillennials’ — jihadis who are Millennials.”

According to the Oxford English Dictionary, the term millennial, which refers to those born between about 1980 and 1995, originated around 1991, while jihadi, one who advocates jihad, or a holy war against “infidels,” entered English around 1920.

“In a long campaign that’s far from over, Republican presidential candidate Donald Trump’s comment. . .that Hillary Clinton…’got schlonged’ in her 2008 primary run might be considered just another insult.”

Schlong, a slang term for penis, may also refer contemptuously to a person. The word is Yiddish in origin and and translates literally as “snake.”

Linguist Steven Pinker told The Washington Post that “given Trump’s history of vulgarity and misogyny, it’s entirely possible that he had created a sexist term for ‘defeat,”’ and that as far as Pinker knew, “there is no such slang verb [as get schlonged] in Yiddish.” However, it may simply be a mistake, what with Trump’s track record of “sloppy language.” WaPo also points out that Trump used “get schlonged” at least once before, also in reference to a female political candidate.

Meanwhile, Clinton is “too disgusting” for having to use the ladies’ room.