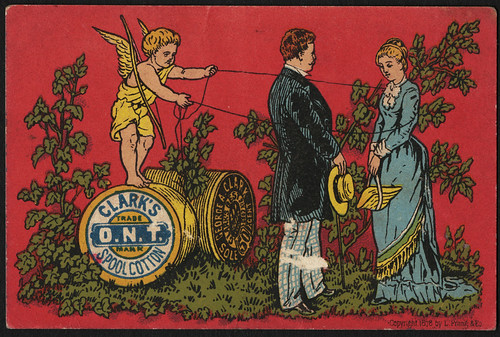 What is love? En Vogue sang about it, poets have mused on it, and people look it up in the dictionary. Here’s our attempt to understand what exactly love is.

The word love comes from the Old English lufu, “love, affection, friendliness.” The Greek root for love is philia (see this list for lots of examples) while the Latin root is amare, which gives us words like amorous, paramour, amiable, and more.

Puppy love, which goes back to at least 1834, is “adolescent infatuation,” and was also once known as calf-love, presumably modeled on the overeager, needy behavior of puppies and calves. A crush, first recorded in 1884, is a “temporary infatuation” while a man crush (which seems to have originated around 2005) is when a straight man has “a crush-like but non-sexual feeling of attraction toward and admiration for a man.” A man crush may result in a man date and possibly some bromance.

Limerence is a type of unrequited love. The word was coined by psychology professor Dorothy Tennov who claimed that the word “has no roots whatsoever” and “no etymology whatsoever.” To carry a torch for someone means “to love or to be romantically infatuated with, especially when such feelings are not reciprocated,” and may come from the “the Greek and Roman tradition of a wedding torch.” This idiom gives us torch song, “a song, often sentimental, lamenting an unrequited love,” which seems to have originated in 1927.

Few of us are lucky enough to experience love at first sight, or as the French say, coup de foudre, literally “stroke of lightning.” How about yuanfen, “a relationship by fate or destiny”? Or koi no yokan, “the sense upon first meeting a person that the two of you are going to fall into love”? (Be sure to check out the rest of Big Think’s list for more untranslatable foreign love phrases.)

If you’re a flirt, you’re “one who plays at courtship.” Flirt originally meant “to turn up one’s nose, sneer at” (1550s), then “to rap or flick, as with the fingers” (1560s). By the 1560s, flirt as a noun came to mean “a pert young hussey,” and by 1777 the verb sense came to mean “play at courtship,” which may have been influenced by Old French fleureter, “talk sweet nonsense,” or “to touch a thing in passing.”

If you like to flirt, you also like to mash (check out our blog post on letters and notes for the etymology). Or maybe smirting, a blend of smoking and flirting, is more your thing. Smirting was coined in Ireland after “the introduction of the pub and restaurant smoking ban in January 2004.” There’s also smexting, smoking and texting, a more solitary activity, unless of course you’re engaging in sexting or textual intercourse (in which case you may want to save your cigarette for afterward).

If you prefer a real date, try cyberdating (especially since it’s now apparently the second most common way for couples to meet); speed dating, “an organized event in which prospective romantic partners meet each other through a series of short one-to-one  meetings”;  hyperdating, “dating many different people over a short period of time”; intellidating, “dating that emphasizes intelligence, particularly by attending lectures, readings, or other cultural events”; or niche dating, “dating people based on a single characteristic, or on a very limited set of characteristics.”

Bad date? Make sure to arrange a rescue call, “a call to a cell phone placed at a prearranged time to give the person being called an excuse to end a date or other social engagement” (not to be confused with a booty call), especially if you end up with a toxic bachelor, “an unmarried man who is selfish, insensitive, and afraid of commitment.”

Or perhaps you’re a quirkyalone, “a person who enjoys being single and so prefers to wait for the right person to come along rather than dating indiscriminately,” or a leather spinster, a woman “who is happily unmarried and has no desire to seek a mate.”

Most of us have heard enough about cougars and MILFs, but how about a manther (a blend of man and panther), “a middle-aged man who seeks sexual or romantic relationships with significantly younger women,” or a Mellencamp, “a woman who has aged out of being a ‘cougar’,” named for singer John Cougar Mellencamp. (In case you were wondering, another, far less-SFW eponym is santorum, named for Rick Santorum, and which we’ll refrain from defining here.)

Hear wedding bells? Men might want to consider a management ring, an engagement ring for men. And ladies? Try not to morph into bridezilla, part bride, part Godzilla, a phrase which seems to have originated in the mid 1990s. But it’s okay if you have an office spouse, “a co-worker with whom one has a very close but nonromantic relationship.”

Special thanks to Word Spy.