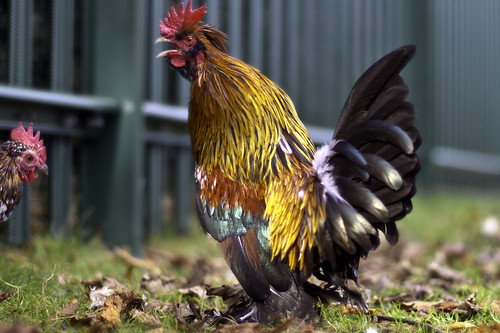 Get your firecrackers and red envelopes ready, the Lunar New Year is almost here!

As you may know,  the Chinese zodiac rotates on a 12-year cycle, with an animal representing each year. This time around it’s the hardworking and ostentatious rooster, which got us thinking about the origin of rooster words. Here’s a brief history of those terms that go cock-a-doodle-doo.

The word cock, referring to an adult male chicken, is quite old, originating in the late ninth century, according to the Oxford English Dictionary (OED). It comes from the Old English cocc, “male bird,” and is imitative in origin.

The more salacious meaning of cock arose (ahem) around 1618. Rooster, perhaps a euphemistic shortening of the older roost-cock, is from the 1770s. The OED describes the term as chiefly used in North America, Australia, and New Zealand, while the Online Etymology Dictionary says rooster became “favored in the U.S. originally as a puritan alternative to cock (n.) after it had acquired the secondary sense ‘penis.’”

Another name for a rooster, chanticleer is a 14th-century term that started as proper name and comes from animal fables. Other such animal names include bruin for bear, grimalkin for cat, and Reynard for fox. Chanticleer comes from the French chanter, “to sing.”

A cockatrice is mythic serpent that hatches from a cock’s egg, has “the power to kill by its glance,” and has characteristics of both a snake and a rooster. However, the word doesn’t come from the Old English cocc but the Latin calcāre, “to track.”

This onomatopoetic word for a rooster cry is attested to 1573, says the OED. Other languages have their own versions. In French it’s cocorico; in German, kikeriki; and in Russian, kikareku. Check out this post for a list of cock-a-doodle-doos from around the world.

This useful phrase referring to “an absurd or highly improbable tale passed off as being true” might be allusion to Aesop’s fables, says the Online Etymology Dictionary, and their “incredible talking animals.”

Want more fowl words? Check out this list. Happy Year of the Rooster!