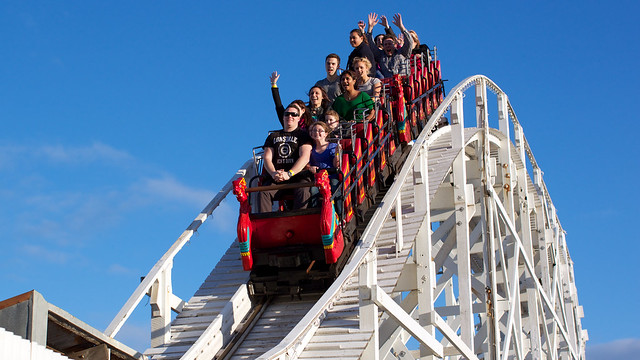 Earlier this summer was the 132nd anniversary of the opening of the first roller coaster in America. A main attraction of Coney Island, the Gravity Switchback Railway traveled at a whopping six miles an hour and cost all of five cents, says History.com. (Coney Island’s famous wooden coaster, the Cyclone, opened in 1927.)

Of course the roller coaster is hardly just an American phenomenon, which got us wondering how one might say roller coaster in other languages. Let’s take a ride and see.

The origin of ‘rollercoaster’

While the first roller coaster in America opened in 1884, the first instance of the word, says the Oxford English Dictionary (OED), was the year before in a September 30 issue of the Chicago Tribune: “A curious structure is now in course of construction… It will be known as ‘The Roller Coaster’, and the objects claimed for it are health and amusement.”

As for where the name comes from, linguist Barry Popik says the structure is “said to have originated from an early French design where slides or ramps were fitted with rollers over which a sled would coast.” While the design changed to that “of fitting the wheels to the sled or other vehicles,” the name roller coaster stuck.

According to How Stuff Works, “direct ancestors” of modern-day roller coasters were ice slide rides popular in 16th and 17th century Russia. The wooden slides were long and steep, “some as high as 70 feet,” and sliders rode on “sleds made out of wood or blocks of ice” and crash-landed in sand piles.

In addition to sounding absolutely terrifying, this might explain why the roller coaster is known as “Russian mountain,” or some variation thereof, in so many languages. In French it’s montagnes russes; in Spanish, montaña rusa. The Italians say montagne russe while the Portuguese use montanha russa.

Icelandic calls it like it is: rússíbani, which translates as “Russian death” or “Russian killer, bane, slayer.”

A different kind of eight track

In some languages the roller coaster is named for the figure eight design of some tracks: achtbaan in Dutch, Achterbahn in German, and Achterbunn in Luxembourgish.

The need for speed

And sometimes it’s all about velocity. The Indonesian kecepatan roller coaster translates as the rather redundant “speed roller coaster” while in Japanese it’s jettokōsutā, or “jet coaster.” As you might have guessed, roller coasters are big in Japan.

And medium in Mongolia

We’re not sure what’s more surprising, that sparsely-populated Mongolia has an amusement park or that roller coaster translates literally from Mongolian as “crazy mouse” (galzuu khulgana).

Why crazy mouse? It appears to be a brand name gone generic. The Crazy Mouse is a type of roller coaster, of which China is the leading manufacturer. Hence, the import of the crazy mouse roller coaster to the Ulaanbaatar National Amusement Park.

Luna Park opened in 1903 along with Coney Island’s other amusement parks, Sea-Lion Park and Steeplechase Park. Decked out with 250,000 lights, Luna Park soon garnered the nickname, “Electric Eden.” While it closed in 1946, the park reopened in 2010.