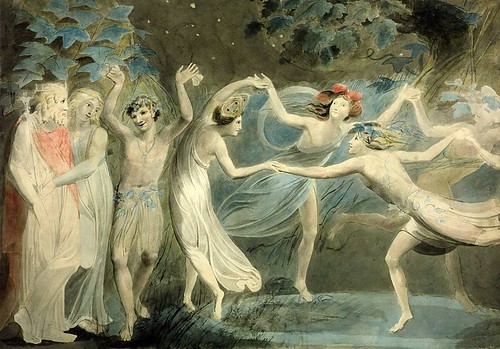 Today marks what is observed as William Shakespeare’s birthday. How will you celebrate? Perhaps you’ll talk like Shakespeare, or maybe you’ll conduct some computational analysis on the Bard’s plays. As for us, we’re Word Soup-ing some now-common words and phrases that Shakespeare coined or popularized.

Shylock: “Shall I bend low, and in a bondman’s key, / With bated breath and whispering humbleness / Say this: / ‘Fair sir, you spit on me on Wednesday last?’”

Act 1. Scene I, The Merchant of Venice

With bated breath means “eagerly; with great anticipation.” According to World Wide Words, “Shakespeare was the first known writer to use” the phrase, and “bated here is a contraction of abated,” which means “reduced, lessened, lowered in force.” Thus, bated breath “refers to a state in which you almost stop breathing as a result of some strong emotion, such as terror or awe.”

Macbeth: “It were done quickly: if the assassination / Could trammel up the consequence, and catch / With his surcease success; that but this blow / Might be the be-all and the end-all here.”

Shakespeare was the first to use this phrase meaning “the essential factor; the all-important element; the supreme aim.”

Miranda: “How beauteous mankind is! O brave new world, / That has such people in’t!”

Act 5. Scene I, The Tempest

The use of this phrase is ironic in both The Tempest and Aldous Huxley’s dystopian novel: in the play, it’s used to describe the first strangers Miranda has seen, “drunken sailors staggering off the wreckage of their ship,” while in the novel, “Huxley employs the same irony when the ‘savage’ John refers to what he sees as a ‘brave new world.’” The novel also contains numerous quotes from Shakespeare’s plays.

Hostess: “So I told him, my lord; and I said I heard your grace say so: and, my lord, he speaks most vilely of you, like a foul-mouthed man as he is; and said he would cudgel you.”

Foul-mouthed is defined as “using scurrilous, opprobrious, obscene, or profane language; given to abusive or filthy speech.”

Mercutio: “Thou wilt quarrel with a man for cracking nuts, having no other reason but because thou hast hazel eyes;–what eye but such an eye would spy out such a quarrel?”

Act 3. Scene I, Romeo and Juliet

Shakespeare was the first to use hazel in reference to eye color, according to the Online Etymology Dictionary. In the play, hazel refers to a “reddish-brown color. . .in reference to the color of ripe hazel-nuts.” Today hazel eyes may also be yellowish- or greenish-brown.

Worcester: “Look how we can, or sad or merrily, / Interpretation will misquote our looks.”

Misquote, in this context, “to misread; misconstrue; misinterpret,” was first recorded in Shakespeare in the 1590s. Quote is attested to the 14th century and comes from the Middle English coten,”to mark a book with numbers or marginal references,” which comes from the Medieval Latin quotare, “to number chapters.”

“Nick Bottom is a weaver and a bottom was, at the time Shakespeare was writing, a skein of thread or a structure around which thread was wound.”

Weaver-related definitions for bottom include “the cocoon of a silkworm,” and “a color applied to a fabric with a view of giving a peculiar hue to a dye which is to be subsequently applied.” As for the buttocks meaning of bottom, the Virtual Linguist says that “only dates back to the late 18th century, well after Shakespeare.”

Prince of Wales: “I am content that he shall take the odds / Of his great name and estimation, / And will, to save the blood on either side, / Try fortune with him in a single fight.”

Odds meaning “the amount or proportion by which the bet of one party to a wager exceeds that of the other” and hence, the “probability or degree of probability in favor of that on which odds are laid,” was first found in Shakespeare in 1597. Odds is the plural of odd, which comes from the Old Norse oddi, “point of land, triangle, odd number.”

Macduff: “What, all my pretty chickens and their dam / At one fell swoop?”

Shakespeare was the first to use this phrase meaning “in one stroke.” According to World Wide Words, fell here doesn’t refer to falling but to an old meaning of the word, “of a strong and cruel nature; eager and unsparing; grim; fierce; ruthless,” and comes from the Old French fel, “cruel, fierce, vicious.” Related is felon.

Hamlet: “Let it work; / For ’tis the sport to have the engineer / Hoist with his own petard.”

A petard is “an engine of war used to blow in a door or gate,” or “a small paper cartridge used in ornamental fireworks.” World Wide Words says the word only survives in the phrase hoist with one’s own petard, which means getting “injured by the device that you intended to use to injure others.” Petard ultimately comes from the Latin peditum, “to break wind.”

“Mischievous behavior is called puckish ostensibly after Shakespeare’s Puck from ‘A Midsummer Night’s Dream,’ but the Bard of Avon was following a folkloric tradition in which spirits called pucas caused trouble for travelers.”

Cleopatra: “My salad days, / When I was green in judgement, cold in blood, / To say as I said then.”

Salad days refer to “a time of youth, innocence, and inexperience.” Although it first appears in Antony and Cleopatra in 1606, “it only became popular,” says World Wide Words, “from the middle of the nineteenth century on.” The link between salad and youth is the color green, like that of “young green shoots of spring.” Today salad days also refers to “a period in the past when somebody was at the peak of their abilities or earning power, in their heyday, not necessarily when they were young.”

Ariel: “Nothing of him that doth fade / But doth suffer a sea-change / Into something rich and strange.”

Sea change has the literal meaning of “a change caused by the sea,” as well as the figurative, “a marked transformation.” World Wide Words cites one of the first figurative uses occuring in 1877. We found one from slightly earlier, in 1861: “A year or two ago they would have foreboded nothing more than a straggling riot; but kings and people have undergone a sea-change in the interval, and such indications can no longer be safely set down at their old value.”

Emilia: “O, fie upon them! Some such squire he was / That turn’d your wit the seamy side without, / And made you to suspect me with the Moor.”

Shakespeare popularized the figurative use of seamy, “sordid; base.” This comes from the idea, says the Online Etymology Dictionary, that “the seamy side of a sewn garment [is] the less attractive, and thus typically turned in.”

Puck: “What hempen home-spuns have we swaggering here, / So near the cradle of the fairy queen?”

Swagger, “to strut with a defiant or insolent air, or with an obtrusive affectation of superiority,” was first recorded in this 1590 play, and is a frequentative of swag, meaning “to move as something heavy and pendent; sway.” (A frequentative is “a verb which denotes the frequent occurrence or repetition of an action.”)

What are some of your favorite Shakespeare words and phrases?