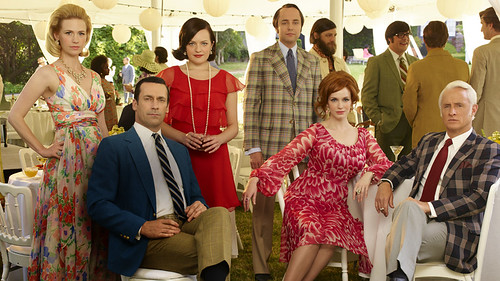 Mad Men has always shown, perhaps this last half-season more than ever, that everything must come to an end — jobs, relationships, life, and yes, even our logophilic round-ups of the show.

So pour yourself a cocktail, light a smoke (actually, don’t), and enjoy these drinking terms, hobo words, and of course an anachronism or two.

Peggy: “They all have their own toy. If we want enthusiasm, we should just have one toy.”
Stan: “Like a battle royale, just throw one in there, last kid standing gets the gig?”

Anachronism alert! While the term battle royal — that’s royal without an “e” — has been around since the 1670s, battle royale (with an “e”) didn’t come about until 1999 with the publication of the novel by Japanese writer Koushun Takami.

Both meanings, however, are the same — a fight involving many combatants —  with the added implication of a fight to the death for battle royale.

According to the Grammarist, the original battles royal were common as “huge boxing matches” in 17th and 18th century England. When they lost popularity, the big brawls migrated to the southern United States, and today exist “in the domain of professional wrestling and mixed martial arts.”

A beer belt (not to be confused with this snazzy accessory) is a swathe of countries or states where beer is the beverage of choice, or where it’s produced.

However, while certain countries in the UK and Europe have been referred to as the beer belt since at least the early 20th century, we couldn’t a reference to the beer belt of the U.S. earlier than 2014.

Other regional “belts” include the bible belt, parts of the U.S. dominated by Southern Baptist Convention or Protestant fundamentalism; the rust belt, an industrialized area with older factories, often no longer in use; the borscht belt, “the predominantly Jewish resort hotels of the Catskill Mountains”; and many more.

While to be a catch, someone desirable for marriage or a relationship, might sound modern, the idiom has been around since about 1722, and comes from an early meaning of fish as someone desirable to catch or hook for matrimony.

Peggy [to Don]: “Have a big idea. Create a catchphrase.”

A catchphrase is widely-used phrase originally created as a slogan for a group, movement, fictional character, advertisement, etc. The term originated around 1837 with the idea of a group of words that “catch” attention.

Another catch- word is, well, catchword, a well-known word or phrase that encompasses some idea; a catchy name or slogan; or in printing, “the first word of a page printed in the bottom right-hand corner of the preceding page.”

The Draw-a-Man test — now known as the Draw-a-Person test — was developed by American psychologist Florence Goodenough in 1926. In the current evaluation, the child is asked to draw a man, woman, and herself. The drawings are then assessed for absence or presence of features, amount of detail, and correct proportion.

The test’s validity has been questioned as there is low correlation between Draw-a-Person scores and other intelligence tests. In addition, since at least the 1960s, the exam has also been used as an indicator of schizophrenia.

Go cry in church is a dismissal of someone’s self-righteous complaints. In a cursory search, we couldn’t find the origin of the phrase. If you have any information, let us know in the comments!

Roger [to Diana]: “Hey, Mildred Pierce, can I get the check?”

Mildred Pierce is a 1940s novel and movie about a Depression-era woman who supports her family by working as a waitress.

The Milk and Honey Route

“‘The Milk and Honey Route’ derives its title from a 1931 book subtitled ‘a handbook for hobos.’ It’s an apt point of reference for Don’s aimless wandering.”

The Milk and Honey Route: A Handbook for Hobos was written in 1930 by American sociologist Nels Anderson under the pseudonym, Dean Stiff. Anderson’s earlier study, “The Hobo: The Sociology of the Homeless Man,” was based in part on his own experiences as a migratory worker.

The phrase milk and honey meaning prosperity and abundance comes from biblical description of the Promised Land.

one for the road

It’s popularly thought that the phrase one for the road, a final drink before departure, comes from “the supposed practice of offering condemned felons a final drink at pubs on the way to the the place of public execution in London.” However, no historical record supports this, says The Phrase Finder, and more likely it’s simply a colloquial reference to “a departing drink in English pubs.”

The earliest citation according to both The Phrase Finder and the OED is from 1939: “Propaganda should be employed to train and fortify public opinion in the condemnation of persons who drink before driving—above all to discourage the practice of ‘one for the road’.” The phrase was popularized by the 1943 Johnny Mercer song, “One for My Baby (and One More for the Road).”

Operator: “I have a person-to-person call for Betty Francis from Donald Draper.”

Person-to-person refers to a long distance phone call booked through an operator and “chargeable only when the caller speaks to an indicated person at the number reached.” The term, and presumably the practice, originated around 1919, says the OED.

Person-to-person calls still exist today, but, as a poster on Straight Dope says, “no one in their right mind” would actually place one. This type of call was useful in the past when long distance prices were exorbitant, but now with mobile phones and other technology, person-to-person calls are probably unnecessary.

Want more Mad Men? Check out all of our Don Draper-esque posts.