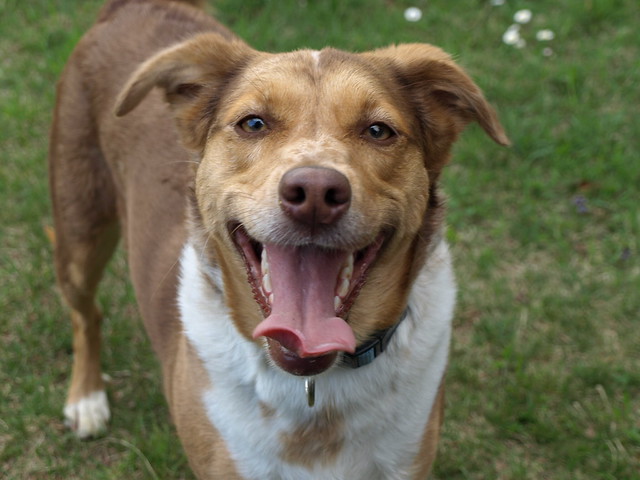 We don’t think we’ve met a doggo we didn’t like, but there’s something about mutts and mongrels that tugs extra hard at our heartstrings. We’re not talking designer dog blends but those curs of more mixed or indeterminate breeds.

The names are as varied as the tykes themselves, and often change depending on where you live. The Dictionary of Regional American English (DARE) has captured much of these through their 1,800 field recordings (now freely available online) from across the United States. On this National Dog Day, we bring you 12 of those regional slang terms for mutts, mongrels, and curs.

Heinz dog is used throughout the U.S., says DARE. In addition to a dog of mixed or indeterminate breed, it’s a joking or uncomplimentary word for a dog in general. The term has a kennel of variants, including Heinz, Heinz 57, Heinz fifty-seven dog, fifty-seven varieties dog, Heinz mixture, Heinz terrier, and Heinzee hound.

The name comes from the Heinz Company’s advertising of its ketchup, which “somewhat mysteriously brags about the company’s ‘57 Varieties,’” says FastCo Design. However, there have never been 57 varieties of Heinz products. Company founder Henry J. Heinz was inspired by an ad for a company that made “21 varieties” of shoes, and came up with 57 by using his favorite number, five, and his wife’s, seven.

Hailing from the Aloha State, this mongrel moniker once referred to a native Hawaiian breed that’s now extinct. It’s also a slur for someone of native Hawaiian ancestry. The DARE interviewees offer a few different theories for the origin. One is that the native breed was either “fattened on poi and served at feasts,” or served at said feasts along with poi. Another is that “poi is a mixture just like a mongrel is.”

Got a mutt in Florida or Oklahoma? You’ve got a sofkee dog. Also sofkey, sofki, and sophky. The word sofkee comes from Muskogee (Creek) Nation safki and refers to a soup or gruel whose main ingredient is boiled corn, also known in some parts as hominy. Hominy comes from the Virginia Algonquian uskatahomen.

All a soup hound’s fit to do is eat, says an Alabama resident. Might also be heard in parts of California, Wisconsin, Texas, Mississippi, Tennessee, and Washington. The nickname might have to do with the idea of soup being mixed and having a variety of ingredients.

This saying for a hound, usually of mixed breed, or any nondescript dog, is from the Gulf States, which includes Alabama, Louisiana, Florida, Mississippi, and eastern Texas. According to the Oxford English Dictionary (OED), it’s also a Caribbean term, and in North America once referred to a contemptible person. Someone who’s pot-licking is an obsequious brown noser.

Have a mixed pooch in Louisiana and you have a kyoodle, also spelled cayoodle, kiyutle, and kiyoodle. The OED says this expression means to make a loud noise, or to bark or yap, and is imitative in origin.

But which came first, kyoodle the dog or kyoodle the woof? The former it seems. The OED’s earliest citation is from John Steinbeck’s 1935 novel, Tortilla Flat: “The dogs..sought out a rabbit and went kyoodling after it.” DARE’s is from the 1906 My Old Bailiwick by Owen Kildare: “So you was going to have me arrested for finishing that kyoodle o’ your’n?”

If you’re an outlaw in southeast Alabama or south-central Louisiana, you’re a fugitive or a farrago or a fido. Another animal definition includes a horse that is unmanageable, chiefly uttered in the West.

While English and Irish setters were “originally trained to indicate the presence of game by crouching in a set position,” the only setting this cur in Wisconsin, Minnesota, and Ohio might do is on the edge of the road.

In addition to stones that make up a curb, curbstone also refers to someone untrained or unsophisticated, and by extension could refer to a mangy mutt. This sense might come from curbstone broker, which, according to the OED, means a broker who’s not a member of the stock exchange but who “transacts business in the streets.”

A small potpourri pup might be called a feist in the South and South Midland states. The term has many variations, including fais(t), faus(t), fife, and fist(e), and is a shortening of fisting-hound or foisting-hound, which ultimately comes from fist meaning to break wind. By extension, says DARE, it can also refer to  “a person or animal that is irascible, touchy, or bad-tempered.”

“You ain’t nothing but a hound dog,” sang Elvis. So it might not be surprising that this mongrel expression is popular in the Lower Mississippi Valley, which includes parts of Mississippi and Tennessee, as well as Texas and the South Atlantic states.

In addition to deep-fried cornmeal and the brand name of a soft, lightweight shoe, a hush puppy might refer to a mongrel hunting dog in Alabama.

A sooner or sooner man is a lazy, good-for-nothing person, says DARE, ironically playing on sooner meaning the opposite, a quick or clever person. By extension is the South and South Midland sooner dog, as describes an east Tennessee resident: “I’ve got a sooner dog. He’d sooner lay in the house as out in the yard.”

Another meaning of sooner is someone “who settled homestead land in the western United States before it was officially made available, in order to have first choice of location,” and perhaps by extension, a resident of Oklahoma.