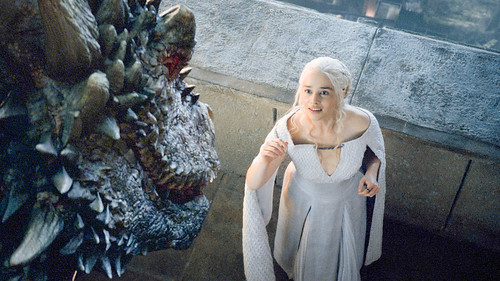 Don’t say we didn’t warn you.

The latest season of Game of Thrones is coming to a close. We’ve seen uprisings, great battle scenes, a giant we totally want to hang out with, another terrible, horrible, no good, very bad wedding, and finally — finally! — Dany flying on a dragon, even if it was a bit Falcor-esque.

And as with seasons past, we’ve been collecting the most interesting GoT words. Here are 14 of our favorites.

“Game of Thrones is famous for its tragic weddings, but last night the show pushed that into even darker territory with what fans have dubbed ‘the Black Wedding.’”

Another season of Game of Thrones, another horrible wedding. We’ve already had the bloody Red Wedding and the poisonous purple one. Now we have the Black Wedding to add to our GoT lexicon.

The Black Wedding is what fans have dubbed the nuptials between Sansa Stark and Ramsay Bolton, nee Snow, in the episode “Unbowed, Unbent, Unbroken.” The ceremony takes place in the darkness of the Godswood, but the situation turns even darker when Ramsay horrifically assaults his young bride on their wedding night.

Stannis: “You don’t look like a soldier. But I’m told you killed a white walker. . . .How?”
Sam: “With a dagger made of dragonglass.”

Dragonglass is Westeros vernacular for obsidian, a volcanic glass formed from rapidly cooling lava. The word obsidian comes from the Latin obsidiānus, a misprint of obsiānus, “lapis,” named after Obsius, the Roman who supposedly discovered the stone.

Dragonglass and Valyrian steel are the only two known substances that can kill White Walkers.

Cersei [to the High Sparrow]: “In the days before the Targaryens, the Faith Militant dispensed the justice of the Seven.”

The Faith Militant are the barefoot and berobed army of the Faith of the Seven, the dominant religion of the Seven Kingdoms. The religious regiment was disbanded long ago by King Maegor Targaryen but has made a fast and furious comeback.

Author George R. R. Martin has said the Faith Militant are based on the medieval Catholic Church, complete with corrupt religious leaders, aggressive reformation, and one god with multiple aspects, in this case seven as opposed to the three of the Trinity of the Catholic Church.

Announcer: “Free citizens of Meereen! By the blessings of the Graces and her majesty the Queen, welcome to the Great Games!”

The Graces are priestesses of the Ghiscari religion in Slavers’ Bay. While they have yet to appear on the show (at least as of this penultimate episode), in the books they wear different-colored robes according to their hierarchy. Red Graces are “cult prostitutes,” or those involved with sacred prostitution; Blue Graces are healers; White Graces are “young girls of noble birth” with yet undetermined grace-y skills; and the Green Grace, of which there’s only one, is the high priestess.

Gilly: “What do you call it in the south? What happened to your face.”
Shireen: “Greyscale.”

Greyscale is a contagious and often fatal disease that leaves the flesh scaly, gray (hence, the name), and “stone-like to the touch.” Princess Shireen Baratheon survived the disease, only to be left disfigured.

Greyscale might be likened to such real-life diseases as leprosy and ichthyosis. Leprosy, also known as Hansen’s disease, is contagious and causes ulcers of the skin, bones, and organs, often leading to loss of sensation, gangrene, and paralysis. Ichthyosis is hereditary and characterized by “dry, thickened, scaly skin,” hence its nickname, fishskin disease. The word ichthyosis comes from the Greek ikhthys, “fish.”

Cersei: “The High Septon‘s behavior was corrosive, as was his attitude.”

You probably won’t find this definition of septon in traditional dictionaries. The Century describes septon as “a principle formerly supposed to be the essence of infection,” while the Oxford English Dictionary says it’s a name for nitrogen, “from its being regarded as the agent in putrefaction.”

A discussion at Wordsmith.org describes septon as a word commonly used in science fiction and fantasy to describe the leader of a sept, or a division of a family or clan. Sept is probably an alteration of sect, which comes from the Latin secta, “course, school of thought.”

House of Black and White

Ternesio Terys [to Arya]: “The House of Black and White. This is where you’ll find the man you seek.”

Both a temple dedicated to the Many-Faced God and the headquarters of professional assassins known as the Faceless Men, the House of Black and White is so-called because half its door is ebony and the other half weirwood, which is white.

In the House of Black and White is the Hall of Faces, a crypt for the faces of the dead, which the Faceless Men use to change their appearance.

Tyene: “My dagger was coated with a special ointment from Asshai. They call it the Long Farewell. It takes time to work, but if a single drop makes contact with the skin, death.”

The Long Farewell is native to the city of Asshai, which is to “the distant east of the Free Cities, Dothraki Sea, and Slaver’s Bay.” Other poisons of Westeros include Wolfsbane; Essence of Nightshade, a calming agent in small doses but fatal in large doses; and the Strangler, the culprit in King Joffrey’s wedding death.

Jaqen: “Lana is very impressive. Very industrious. She will make a fine servant for the Many-Faced God.”

In the books, the Many-Faced God is also known as Him of Many Faces, and is only called the God of Death in the TV series. The Faceless Men in particular worship this god and believe that the god “is unknowingly worshipped by most faiths, simply under different names,” and, presumably, faces.

Other gods with multiple faces include Janus, the Roman god of gates and doorways, depicted with two faces looking in opposite directions, and Brahma, the creator god in Hinduism, depicted with four faces for each of the four Vedas, or sacred texts.

Cersei [to Mace]: “As the King’s Master of Coin, I can think of no one more qualified.”

The Master of Coin is basically the royal treasurer of Westeros. The position was previously held by Petyr “Littlefinger” Baelish, who was seen as a true money master, “always about to conjure up gold to meet the Crown’s demands,” but who was actually borrowing huge sums from the Iron Bank of Braavos, leaving the Iron Throne in debt.

Kevan: “What mission?”
Cersei: “That is not your concern as Master of War.”

Sons of the Harpy

Daenerys: “Sons of the Harpy. . . .They’ve never killed before.”
Ser Barristan: “It was only a matter of time, your Grace.”

The Sons of the Harpy are gold-masked anti-Khaleesi marauders, hell-bent on killing the queen’s army. The Sons’ masks resemble the Harpy, which “takes the form of a giant gold statue atop the Great Pyramid, aka Dragon Queen HQ,” and which Daenerys covered with “a black banner bearing the three-headed red dragon insignia of House Targaryen.”

But who are the Sons of the Harpy the sons of? Some believe they’re controlled by the Masters of Slaver’s Bay, who lost everything when Dany freed their slaves. A fan theory suggests the Harpy is the Green Grace, the Ghiscari high priestess of Slaver’s Bay.

The word harpy comes from the Greek Harpiya, “snatchers.”

Kevan Lannister [to Cersei]: “They call themselves Sparrows. Bloody fanatics.”

Stone Men is the moniker given to those severely afflicted with greyscale and who have been exiled in a colony in the ruins of Old Valyria, much like lepers were once exiled to such isolated places as the Kalaupapa Peninsula of Hawaii.

Leper colonies, leprosariums, and lazar houses are all places used to quarantine those with leprosy. The word leper comes from the Greek lepros, “scaly,” while lazar comes from the New Testaments’s Lazarus, the “beggar full of sores” who would rise from the dead.

Want more GoT? Revisit our favorite words from seasons three and four, and definitely don’t miss the musical.