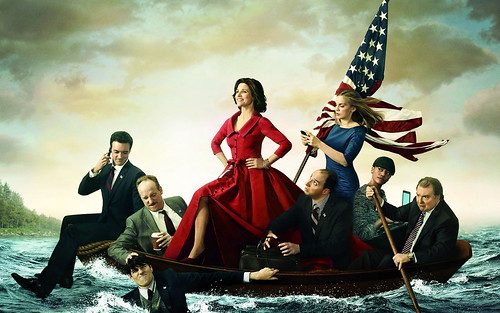 There’s so much to love about Veep: the biting humor, the swearing, the hilarious actors, and of course the words. Enjoy 10 of our favorites as this latest season comes to a close.

Amy: “Hey, Egan, is somebody gonna get fired over this AIDS-nami?”

AIDS-nami, a blend of AIDS and tsunami, refers to the disaster of a massive White House data breach which results in the Reddit-outing of an 8-year old girl with HIV mentioned in the President’s speech.

The word tsunami is Japanese for “seismic wave.”

Gary [to Selina]: “Listen, you are Beyoncé, and his is backup booty.”

The backup booty in reference here is that of Tom James, Selina’s running mate and potential out-shiner. Gary might mean that James is merely a backup (booty) dancer to Selina’s Queen Bey, or a backup booty call, i.e., not the voters’ first choice.

A cock-thumb is when someone makes a radical suggestion in order to prompt the other person to make a more reasonable suggestion, which is actually what the first person wanted. In Veep’s case, the President’s office plans to propose “a radical cut to the military, cutting off the cock,” hoping that “the Joint Chiefs in turn propose their own more reasonable cut, cutting off the thumb.”

Amy [of Selina]: “She’s gone full Colonel Kurtz. Is she giving orders from under the desk?”

The isolated, cruel, and possibly insane Colonel Kurtz is the main antagonist in the film Apocalypse Now, and is based on the character Kurtz in Joseph Conrad’s Heart of Darkness.

Leon: “Are you seriously detaining me again? Am I being rendered?”
Ben: “No. You’re being friendered, so just please accept our compulsory hospitality.”

Leon is an American journalist who has been detained in Iran, only to be further detained by the President to accommodate her schedule for a photo op.

Those who are usually rendered — or sent to countries outside the U.S. for interrogation, imprisonment, and sometimes torture — are untried criminal suspects. Both the U.S. and the United Kingdom are known to engage in this practice of extraordinary rendition.

Friendered means being rendered by friends.

Half-ecuted, a shortening of “half-executed,” refers to the recent botched executions of several death row inmates. Since pharmaceutical companies don’t want to be associated with, well, killing people, death penalty states are having more and more difficulty obtaining the right drugs, and end up using new formulas in “untested doses.”

Ms. Bennett: “Do you recall a document shared on the J-drive titled the Jonad Files?”

The Jonad files — where Jonad is a blend of Jonah and gonad — is a “glossary of abuse” containing insulting nicknames for the hated (and very tall) Jonah Ryan. Such nicknames include Jizzy Gillespie, Jack and the Giant Jackoff, Wadzilla, One Erection, The Pointless Giant, The 60-Foot Virgin, Gimpanzee, Jonah Ono, Hagrid’s Nutsack, and Spewbacca.

The Latina-geddon referenced here is New Mexico Senator Laura Montez, the running mate of Selina’s opponent. Not only is Montez Latina-American, she’s brilliant, pretty, and charming, according to Selina. She also has the very un-PC moniker of “Sexy Mexy.”

The word Latina-geddon is a blend of Latina and armageddon, or the end of the world.

Dan: “Ladies, you are going to be our sale-bait.”

Sale-bait is, as Amy puts it, “independent, well-educated young women. . .who also happen to be very hot to lure congressmen into the room in a way that is deeply feminist.” The word sale-bait is a play on jailbait.

Mike [regarding his dyed mustache]: “I call it Tangerine Dream.”

In his newfound fame as the President’s press secretary, Mike dyes his mustache bright orange. Tangerine Dream is a German electronic music group founded in the late 1960s.