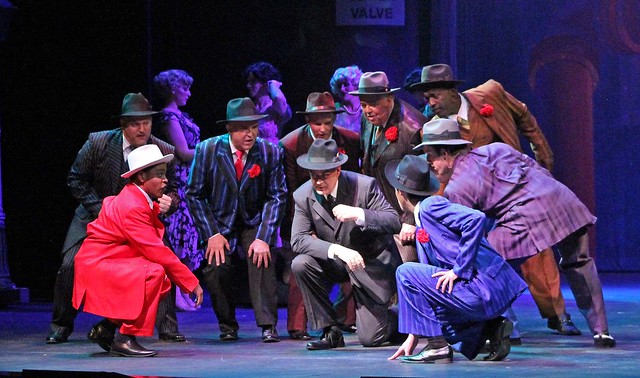 A scene from ‘Guys and Dolls.’

While Damon Runyon might be best known for his 1920s, Broadway-focused short stories — two of which were adapted into the musical Guys and Dolls — what we’re celebrating today are the terms he coined or popularized. Take a look at six of them on the writer’s birthday.

“We go overboard today. We are washed out. We owe every bookmaker.., and now we are out trying to raise some scratch to pay off.”

According to the Oxford English Dictionary (OED), Runyon’s is the earliest recorded usage of this idiom meaning to go to extremes. The literal term of overboard refers to being over the side of a ship.

“I always hear the same thing about every bum on Broadway, male and female, including some I know are bums, in spades, right from taw.”

Since the spade is the highest suit in bridge, it’s fitting that this saying means “to a considerable degree.”

“I felt him fall and I sensed the ‘zing’ of a boob-face Arab’s knife.”

You can thank Runyon for possibly creating the word for this zingy, high-pitched sound. By 1918, says the OED, zing also meant energy, vigor, or a zest for life.

“Personally, I always figure Louie a petty-larceny kind of guy, with no more moxie than a canary bird.”

Before becoming slang for “the ability to face difficulty with spirit and courage”; aggressive energy or initiative; or skill or know-how, moxie was the name of a soft drink (which is apparently still around), which was patented as a “nerve food” around 1885. According to the Dictionary of American Regional English, the name might come from the Algonquian base maski-, meaning “medicine.”

“The contest..turns out to be something of a disappointment, and, in fact, it is a stinkeroo, because there is little skill and no science whatever in it.”

If something isn’t just bad but really bad, it’s not just a stinker but a stinkeroo.

“I love him a zillion dollars’ worth.”

When a million, billion, trillion, or even a quadrillion aren’t enough, you can always use a zillion. If a zillion still isn’t enough, there’s always a gazillion, which, according to the OED, might have been coined by long-time television critic Tom Shales in a December 3, 1978 article for The Washington Post: “Everything is played not to the people in the seats but to the unseen gazillions who will watch the tape played back later that night, when it is teleported into their proverbial bedrooms.”

One thought on “Damon Runyon: Word ‘Moxie’ ‘In Spades’”