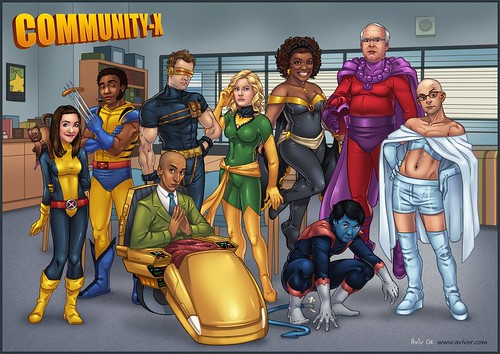 Community is back next week (at least via Yahoo Screen)! And while we’ll miss Yvette Nicole Brown as Shirley, we’re glad school is back in session for the rest of the Greendale gang — so glad we’re rounding up our favorite class Community-isms from Word Soups past.

Britta: “For our midterm, we actually get to diagnose a fellow student with something.”
Annie: “Don’t you do way too much of that already?”
Britta: “Accusational opposition disorder.”

Accusational opposition disorder is a pseudo-psychology term for disagreeing with someone in an accusatory tone.

Jeff: “Somebody tell Britta what an analogy is.”

The traditional definition of analogy is “similarity in some respects between things that are otherwise dissimilar,” and “a comparison based on such similarity.” So “a thought with another thought’s hat on” is actually pretty close.

An eponym is “a word or name derived from the name of a person.” Another example is bowdlerize, “to expurgate in editing by expunging words or passages considered offensive or indelicate,” named for Thomas Bowdler, “who published an expurgated edition of Shakespeare in 1818.”

Dr. Kedan: “Changnesia is a fascinating and extremely rare disease on the forefront in psychological landscape.”

Changnesia is “the complete loss of memory caused by sudden trauma that was, itself, also forgotten.” It’s named for, and perhaps only affects, one Benjamin Chang, Greendale’s erstwhile Spanish teacher.

Also known as “Kevin’s Disease” (Kevin being Chang’s amnesic name slash pseudonym), Changnesia is a blend of Chang and the Greek amnēsiā, “forgetfulness.”

It was also our selection for most ridiculous portmanteau-eponym of 2013.

Cop: “Love is not admissible evidence! I’m working on a cop opera.”
Everyone: “Copera!”
Pierce: “Policial!”

Copera is a blend of cop and opera. Cop originated in 1704 as a northern British dialectecal meaning “to seize, to catch,” and may have ultimately come from the Latin capere, “to take.” Opera comes from the Italian word for “work.” Policial is a blend of police and musical.

Cop Rock was a musical police TV drama that aired in 1990 for a staggering 11 episodes.

Cop: “Of course. The head of security of Greendale Community College has kidnapped the real dean and replaced him with a deanelganger.”
Jeff: “Well, when you say it that way, it sounds ridiculous.”
Troy: “The word we used was doppeldeaner.”

Deanelganger is a blend of dean and doppelganger, a double or apparition of a living person. Doppelganger translates from the German as “double-goer.” Sometimes doubleganger.

A deanelchanger, a blend of dean, doppelganger, and Chang, is a bell that Chang rings to summon the fake dean. Changer may be a play on clang, “a loud, sharp, resonant, and metallic sound,” and clanger, a British English word meaning “a blunder.”

Jeff [practicing foosball]: “I just thought the next time those deutschbags try to show off, I could catch them by surprise.”

Deutschbag — a blend of deutsch, German for the word German, and douchebag — is a douchebag from Germany.

To dewhimsify means to make less whimsical, “having odd fancies or peculiar notions.”

Ferris Buellerian refers to the titular character in the film, Ferris Bueller’s Day Off, who plays hooky and encourages his reluctant best friend to follow suit.

Singer: “I’ve got a pocketful of Hawthornes.”

Hawthorne refers to the character, Pierce Hawthorne, who owns Hawthorne Wipes, a company that manufactures cleaning and disinfecting towelettes. It also refers to the wipes themselves.

A brand name that has become genericized is a metonym. Other trademarks that are often seen in semi-generic use are kleenex for tissues, xerox for photocopy, and saran wrap for plastic wrap.

Britta [to Jeff]: “Without anxiety to keep your vanity in check, you are vulnerable to a syndrome called hypernarcissosis.”

Hypernarcissosis, another pseudo-psychology term, is excessive narcissism or love and admiration for oneself. It contains the Greek hyper, “over, above, beyond, exceedingly, to excess,” and narcissism, which comes from Narkissos, the “name of a beautiful youth in mythology. . .who fell in love with his own reflection in a spring and was turned to the flower narcissus.”

Reverse bully-ism, like reverse discrimination, places the normally dominant group, in this case the bullies, in the position of the victim (the bullied).