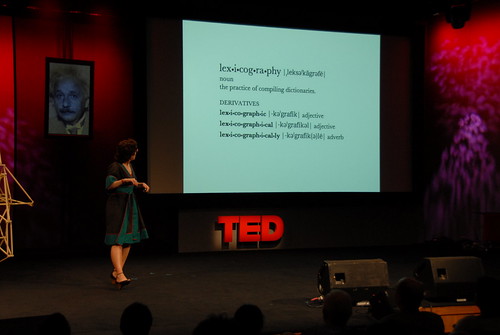 You might know the germ of Wordnik started with Erin McKean’s 2007 TED talk, “The joy of lexicography.” In it, Erin discusses a new kind of dictionary, one not bound by paper but as big as technology allows — big enough to hold all the words.

And not just “real” words because, as Erin says, if you love a word (even made-up ones, and really, if you think about it, all words are made up) it becomes real.

In Erin’s talk are lots of nifty terms, such as clickiness, serendipity, polysemy (“the greedy habit some words have of taking more than one meaning for themselves”), and of course her favorite, erinaceous.

But not only lexicographers’ talks are full of great words. We’ve rounded up 12 of our favorites from TED, some dictionaried, some un-dictionaried, all loved and all real.

“And some people fall smack in the middle of the introvert/extrovert spectrum, and we call these people ambiverts. And I often think that they have the best of all worlds.”

An ambivert is someone with both introvert and an extrovert characteristics.

The word ambivert comes from ambiversion, which was coined by sociologist Kimball Young in 1927. The prefix ambi– means “on both sides,” and also gives us words like ambiguous, ambivalent, and ambidextrous. The ideas of introversion and extroversion in psychology were introduced by C.G. Jung in 1918.

In her TED talk, Susan Cain makes the clarification between introversion and shyness, saying that “shyness is about fear of social judgment,” while introversion is more about how one responds to stimulation. While extroverts “crave large amounts of stimulation,” introverts crave “quieter, more low-key environments.”

“These rules, which Gordon discovered last year, are similar to protocols that control traffic on the Internet—the Anternet, as she calls it.”

Ed Yong, “How The ‘Anternet’ Succeeds by Showing Restraint,” National Geographic, May 15, 2013

Anternet, a blend of ant and internet, is a word coined by Deborah Gordon, a biologist at Stanford University. It describes the way “ants modulate foraging,” which is “remarkably similar to the algorithm the internet uses to control the flow of data.”

“But the best feeling is this biophilia that E.O. Wilson talks about, where humans have this sense of awe and wonder in front of untamed nature, of raw nature.”

Biophilia meaning “the love of nature and all living things” was first used by biologist E. O. Wilson in 1979, according to the Oxford English Dictionary (OED). An earlier meaning, “the biological drive towards self-preservation; love of life,” is from 1892.

“And today, as a cruciverbalist — 23 [Scrabble] points — and an illusion designer, I create that chaos. I test your ability to solve.”

The word comes from the Latin crux, “cross,” and verbum, “word.”

“Now, funnily enough, this is also Joseph after six months on antiretroviral treatment. Not for nothing do we call it the Lazarus Effect.”

The Lazarus effect in this context refers to “the dramatic beneficial changes that antiretroviral drugs…can bring to HIV/AIDS patients.” Lazarus of course refers to, in the New Testament, the brother of Mary and Martha who was brought back to life by Jesus.

“They have a curious language and marriage rule which is called ‘linguistic exogamy:’ you must marry someone who speaks a different language.”

Exogamy refers to “the custom of marrying outside the tribe, family, clan, or other social unit,” perhaps to avoid inbreeding and congenital diseases, while endogamy is, you guessed it, marrying within a tribe or group.

In his TED talk, anthropologist Wade Davis is referring to the Barasana in the Northwest Amazon.

“While they’re mating, the male is busy giving the female not just his sperm but also a nutrient-filled package called a nuptial gift.”

The nuptial gift is passed to the female firefly from the male during what’s called courtship feeding. In her talk, Sara Lewis says that “what makes this gift so valuable is that it’s packed with protein that the female will use to provision her eggs,” and that female fireflies “use male flash signals to try to predict which males have the biggest gifts to offer.”

Other creatures that engage in nuptial gift-giving are certain arachnids, certain crickets, and the great grey shrike a raptor-like bird, for which the proffered present is killed prey.

“Nobody understands this better than semi-anonymous French ‘photograffeur’ JR, whose epic global art project, Inside Out, has seen over 160,000 people take part in more than 108 countries.”

Amy Dawson, “French guerilla ‘photograffeur’ JR is changing perceptions with his art, one project at a time,” Metro, October 16, 2013

Semi-anonymous street artist JR refers to himself as a photograffeur, part-photographer, part-graffiti artist, because instead of spray paint, he tags buildings and other public spaces with photos. The word photograffeur is a blend of photo and graffeur, French for “graffiti artist.”

JR took home the 2011 TED prize, which awarded him $100,000 to “change the world,” which he’s doing one giant wheatpaste photograph at a time.

“Praxeology is the study of human choice, action and decision making.”

Rory Sutherland, “Perspective is everything,” TED, May 2012

The idea of praxeology as a part of economic theory was developed by Austrian philosopher and economist, Ludwig Von Mises. In his talk, Rory Sutherland says that Von Mises believed that economics was just a subset of psychology and referred to economics as “the study of human praxeology under conditions of scarcity.”

Praxeology contains the Greek praxis, “practice, action, doing.” Other praxis words include echopraxia, the involuntary repetition of others, and parapraxis, more commonly known as the Freudian slip.

“This sudden loss of the ability to recognize faces actually happens to people. It’s called prosopagnosia, and it results from damage to a particular part of the brain.”

Prosopagnosia, also known as face blindness, is usually acquired, as Nancy Kanwisher describes, as a result of brain damage, but it can also be congenital, manifesting in up to 2.5% of the population.

The term is from about 1950, and comes from the Greek prosopon, “face,” and agnosia, “ignorance.”

“If you ever aren’t sure if you attended the very best party or bought the very best computer, just settle for ‘good enough.’ People who do this are called ‘satisficers,’ and they’re consistently happier, he’s found, than are ‘maximizers,’ people who feel that they must choose the very best possible option.”

The idea of satisficing originally came from psychologist Herbert Simon in the early 1950s. The word is a blend of satisfy and suffice, and is about being satisfied with good enough, as psychologist (and TED talker) Barry Schwartz puts it, instead of always being concerned with having “the best.”

“I want to suggest to you that synthetic happiness is every bit as real and enduring as the kind of happiness you stumble upon when you get exactly what you were aiming for.”

In other words, synthetic happiness is happiness we’ve chosen to have, despite — and in some cases, even because of — a seemingly negative outcome.