Wondering what to get this year for the logophile in your life? Here’s a list of books, games, art, and other goodies for word nerds of all ages.

What better gift for a word lover than… a word? For $25, you can adopt a word—(almost) any word—in someone’s honor. The recipient will receive a certificate, Wordnik stickers, and other perks, and the money goes toward supporting Wordnik. Wordnik, $25.

Fans of illumination and typography will be impressed by these prints from the Public Domain Review that feature beautifully rendered letters, such as selections from Joris Hofnagel’s “Guide to the Construction of Letters” or the 18th century satirical “Alphabet de la Bourbonnoise.”  Public Domain Review, $25.00 and up. Lingthusiasm has a great selection of linguistics-themed merchandise, including kiki/bouba t-shirts, schwa pins, and everything IPA. We’re partial to these zippered pouches that “push back against language peevery.” Redbubble, $15.89 Designed and sold by Lingthusiasm. RedBubble

These enamel pins by Jane Mount feature hand-drawn book covers you can display on your lapel, with dozens of classics from Middlemarch to Infinite Jest rendered in delightful miniature. Etsy, $11. Why not supplement the Wordnik experience with a subscription to a specialized dictionary, such as DARE, the Dictionary of American Regional English ($49/year)?

826 is a nonprofit that provides writing workshops and after-school tutoring to communities in nine cities across the US. Each location also doubles as an imaginative retail store, which means you can get vintage-inspired posters ($19.99) from LA’s Time Travel Mart, cans of antimatter ($8.00) from the Brooklyn Superhero Supply Company, or an eyepatch ($5.00)and doubloons ($0.75 each) from the Valencia Pirate Supply Store. All proceeds from these shops go to support 826. Litographs take the full text of a book and make it into word art in the form of posters, blankets, jigsaw puzzles, shower curtains, and more. It’s a cool way to show off your love of literature, plus a guarantee you’ll never be bored in the shower again. Litographs.com, $24-$74. Originally created through the NYU Game Center Incubator and funded through Kickstarter, Rewordable is a “uniquely fragmented” card game in which players arrange letter combinations to build increasingly longer and more complex words. It’s a great way for kids to build their vocabularies and linguistic skills, or for adults to flex theirs. Barnes & Noble, $15.99. If the word-lover in your life prefers word gaming at a more leisurely pace, these magnets are a fun twist on the classic fridge poetry formula. Etsy, $20.09-$33.26. There are just too many books to list—word lovers tend to like books, after all—but we’re making an attempt with our Bookshop.org lists. There’s one for word lovers and an even-more-specific list for folks who love dictionaries. Check them out!

We also have a limited number of the Wordnik Kickstarter poster left—US$40, including Priority Mail shipping (to US only). Get them while you can, as we won’t be reprinting these!

Is there a logophile on your holiday gift list? Give the best wordy presents ever with our 2015 Word Nerd Gift Guide. 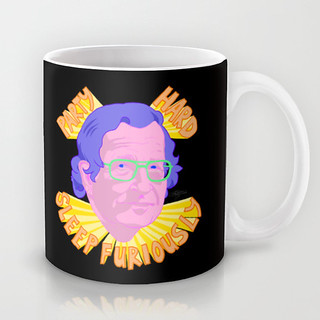 If your loved linguist didn’t choose the wug life, but the wug life chose them, let them show it with wug shirts. You can also help them have less stress in their life with a schwa t-shirt! Or you might want to liven up their vocabulary (terminology, lexicon, or phraseology) with a shirt featuring everyone’s favorite wordy dinosaur, the Thesaurus. 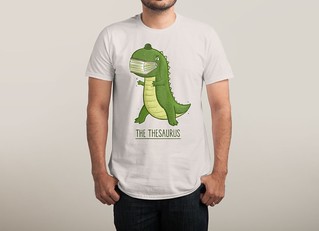 For lovers of American English, you can’t go wrong with a subscription to the online version of the Dictionary of American Regional English—and it’s 50% off through January 3rd!

This year was a great one for language books. Some highlights included:

Between You & Me: Confessions of a Comma Queen, by Mary Norris

A copy editor who has put in more than three decades at The New Yorker, Norris explains some of the most common problems with spelling, punctuation, and usage, drawing on examples not just from classic literature such as Charles Dickens and Emily Dickinson, but from the likes of The Honeymooners and The Simpsons as well.

From Skedaddle to Selfie: Words of the Generations, by Allan Metcalf

The latest from one of our favorite Chronicle of Higher Education writers and the author of OK: The Improbable Story of America’s Greatest Word. From bobbysoxing Silents to whatever Gen X’ers, From Skedaddle explores the words that encapsulate and characterize whole generations.

The Art of Language Invention, by David J. Peterson

The creator of Dothraki? A history of constructed languages? ‘Nuff said.

Bullshit: A Lexicon, by Mark Peters

Also known as @wordlust, Peters has long been one of our favorite word nerds. His latest book delves into all the different ways of saying balderdash, hooey, and bunk.

And of course, our favorite gift: giving a favorite word at Wordnik!

The Regional Assembly of Text is a gift store dedicated to text, replete with old filing cabinets and typewriters, chalkboards, quilted letters, journals, stationary, and other ephemera. And they host a monthly letter writing club, with tea and cookies.

That there is a place where such a store can make ends meet makes me want to move to Vancouver post haste. That and the free heroin.

Thanks to Magnolia and her beautiful sidekick, Arlo, for the link.

A few more good Wordie gifts have come over the transom since last month’s Wordinista gift roundup. If you order immediately, you just might be able to get something shipped in time for xmas. Though you have plenty of time to order a nice New Year’s gift for yourself.

Anything from the Shorthand Press. Erin Healy makes beautiful things–cards, notebooks, clothes–with words on them, and those same words transliterated into shorthand. They’re witty and delightful. Starting around $2.75.

Artificial Larynx. Wordie loves text, but let’s not forget the oral tradition, of which an important part is the Darth Vader voice. “Luke, I am your father!” $529.96

Self-referential shrinky-dinks necklaces. Why have anything, when you can just explain it instead? Via Away With Words. $25.

Helvetica poster. “Meet the cast” poster from the blockbuster “Helvetica.” $20.

Navajo Code Talker GI Joe, for the translator in your life. Says 7 different phrases in Navajo code and English. I stole this one lock, stock and barrel from Language Log.

Noa’s Calendar. From Finland, where all the best calendars come from. More fun with text as graphics–words embedded in sentences. $35.

Last week Errata posted 25 Gifts for Wordinistas. Today’s On Language column is titled Bibliogifts, and contains a suspiciously similar list of dictionaries and the like.

Coincidence? I think not. Safire, I’m watching you.

For your literate friends and loved ones, a selection of gift ideas. Items are divided into three sections: stuff, books, and good causes.

“Bookinist” chair. For the Wordie who has everything. It has space for 80 or so books, a built-in reading light, a secret compartment in the arms for your bifocals or whatever, and a wheel. €2,127 (US$3,154), presumably not including shipping from Germany.

Typewriter font coasters. For the Wordie who likes to drink. They’re from the Sundance catalog, which is kind of like the J. Peterman Catalog, but not as classy. The about page is unbearable: “In the beginning for us there was no end. Now, it’s hard to remember the beginning.” Robert Redford: not a Wordie. $8.

This is prolly my awesomest shirt. For the ironic Wordie. I threw this in because I know how many Wordies detest the words “prolly” and “awesome.” I saw some dude wearing this at my gym and wanted to hug him, but restrained myself, ’cause he prolly would have knocked my teeth out. $21.97.

Crappuccino Mug. For Wordies who support Wordie… and can’t resist a frothy mug of crappuccino. $12.99.

VoxTec Phraselator. For Wordies abroad. Developed for the U.S. military. Translates phrases from English into one of 60 other languages. It can’t translate in the other direction, but that doesn’t matter, since Americans don’t listen to foreigners. $2300.

Wrap a laptop with words. A little more DIY than the others, which is part of the appeal. Use a word list in cloud view as source material, or any other text. Around €25 (~US$37), including shipping.

Fischer Space Pen. For Wordies in Space. Also works well in New Jersey. Note that this image is not to scale: the Space Pen is not actually the same size as an astronaut. $50.

Flowbee. For the well-coiffed Wordie. This has nothing to do with words, other than having an awesome name, and just being… awesome. $59.95.

The Dord, the Diglot, and an Avocado or Two, by Anu Garag. $10.40.
Anu is the impressario behind WordSmith.org, and has been since 1994. I love that the title includes one of my favorite words ever.

That’s Amore!: The Language of Love for Lovers of Language, by Erin McKean. $8.07.
From Erin McKean, lexicographer to the stars and editor of the New Oxford American Dictionary. I’ve heard her other books are great too.

The Professor and the Madman, by Simon Winchester. The classic true story of murder, insanity, and dictionaries. $11.16.

On Bullshit, by Harry G. Frankfurt. Which totally sounds like a fake name–c’mon, Harry Wiener? He’s for real, though. He’s a licensed philosopher, at Princeton. This is perhaps more about meaning than language, though the two are intertwined, one would hope. In any case, it makes a fine companion volume to “The F-Word”. $9.95.

The Canadian Oxford Dictionary. Whether you’re a Canadian, or just wish you were, you now have a first-rate dictionary from which to learn the origins of cougar, poutine, shit disturber, and other exotic gifts from the north. $32.59.

Far from the Madding Gerund and Other Dispatches from Language Log, by Mark Liberman and Geoffrey K. Pullum. $22.00.
From the folks behind the language log blog.

Urban Dictionary is like Wordie’s bad older brother, who taught it to smoke and swear. That doesn’t stop me from thinking it wasn’t a great idea to put “ridonkulous” in the title.

Would someone who works at a library please put the CD-ROMs on bittorrent? Please?

826 Valencia
“826 Valencia is dedicated to supporting students ages 6-18 with their writing skills, and to helping teachers get their students excited about the literary arts.”

Founded by meta-memoirist Dave Eggers. And they have a pirate shop!

First Book
“First Book is a nonprofit organization with a single mission: to give children from low-income families the opportunity to read and own their first new books.”

Founded by “Hermione, Countess of Ranfurly,” who you might think is an 11 year old Harry Potter fan who rules an imaginary kingdom. You’d be wrong, though.

Reading is Fundamental
“Reading is Fundamental prepares and motivates children to read by delivering free books and literacy resources to those children and families who need them most.” Founded by Margaret McNamara, wife of former Secretary of Defense Robert McNamara. I’d make a crack about RIF being some kind of black-ops front organization, except that they do such good work, and I’ve watched so frickin’ many of their PSAs, that I really can’t. I mean shouldn’t.