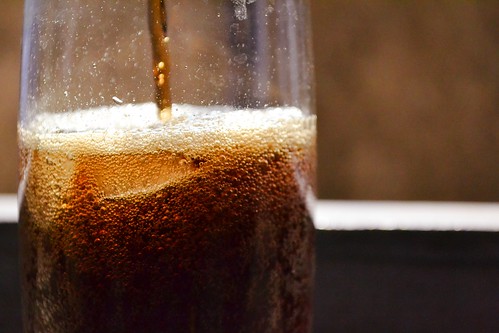 Depending on where you live in the United States, you might have a different name for a sweet, carbonated beverage. Live on the west coast or in the northeast? It’s soda. The midwest? That’s pop. Parts of the south? Coke (even if it’s Sprite).

But how about what Americans used to call fizzy sugar water? With our friends at the Dictionary of American Regional English (DARE), we bring you eight old-timey names for a soft drink.

This old-fashioned name was used especially in Maine. A 1925 quote in DARE says that “even today in the remote northern part of Maine, carbonated beverages are referred to as ‘soft beer.’” According to the American Heritage Dictionary, small beer refers to weak or inferior beer, and, by extension, unimportant, trivial things. To think small beer of is to think lowly of someone or something, says the Oxford English Dictionary.

This old-timey term might have been used especially in North Carolina. Also sodey dope, sody dope, or just dope, a southern colloquialism for a soft drink.

While some of us might equate tonic with tonic water, a quinine-flavored carbonated drink, in New England, it refers to a carbonated soft drink in general.

If you happen to be in the Lower Mississippi Valley and someone offers you a cold drink, you can expect a non-alcoholic, carbonated, bottled beverage that won’t necessarily be cold, at least according to one quote in DARE.

“I need a drink!” some of us might say when we crave a cocktail. But in the southern region, such a term refers to a booze-free, bubbly beverage.

To some of us soda water might refer to “a solution of water, sodium bicarbonate, and acid,” but to some, especially in Texas and the Lower Mississippi Valley, it refers to carbonated water that’s been sweetened and flavored.

This saying originally referred to a drink, usually alcoholic, of poor quality, but in some regions of the U.S. it means any soft drink, usually carbonated. Usage is scattered throughout the country. The Journal of American Folklore cites a 1964 quote from a central Pennsylvania resident: “We had a plant in our town which bottled pop, and we boys would go to the ‘belly-wash factory.’”

What do you call a carbonated soft drink? Tell us in the comments!

2 thoughts on “8 Old-Timey Names for a Soft Drink”