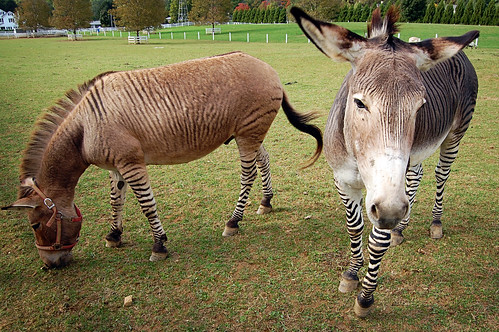 You may have heard of the pizzly, a cross between polar and grizzly bears. Normally, never the twain shall meet: polar bears are marine mammals, says the Washington Post, while grizzlies are landlubbers. However, the twain are meeting now as sea ice shrinks and the tundra expands.

Pizzlies (or grolars if you prefer) got us thinking about other animal mixes. Check out these 18 linguistic and literal beastly blends.

These tiger hybrids are perhaps the most well-known of unusual animal fusions. A tigon is a cross between a male tiger and a female lion while a liger is the product of a male lion and a female tiger. Slate warns that while crossbreeding two big cats may seem like a no-brainer, there are downsides. For instance, ligers can “suffer from unsustainable growth.” Often, as a result, “their hearts give out.”

The word tigon first appeared in English in the late 1920s, says the Oxford English Dictionary (OED). The first tigon may have been shown in a touring British circus in the 19th century while one of the most famous early tigons was presented to the Zoological Gardens in Regent’s Park in 1924 or 1928. While the first ligers on record may be from 1824, the word didn’t appear in print until about 1938.

A leopon is the product of a leopard and a lion, and may have first been bred in the early 20th century. A jagulep is what you get when you cross a jaguar and leopard.

The leopard itself was originally thought to be a hybrid, specifically between a lion and a panther, says Online Etymology Dictionary. The word is from the late 13th century and comes from the Late Latin leopardus, literally “lion-panther.” The word jaguar is from about 1600 and is Portuguese in origin, ultimately coming from the Guarani jaguá, yaguar, “dog.”

While you won’t find any labradoodles or cockapoos here (check out our classic dog words post for those), you will find these coyote, wolf, and dog concoctions. The coydog isn’t a shy Fido but the result of a coyote and feral dog pairing. A wolf dog, while also a dog trained to hunt wolves, is the lovechild of a wolf and a dog. Finally, a coywolf is the output of a coyote-wolf union.

What do you get when you cross a female bottlenose dolphin and a male false killer whale? A wholphin of course.

A mule may not be exotic, but it is indeed an amalgam, in this case of a male donkey and female horse. Meanwhile, a hinny is a mix between a male horse and a female donkey.

While infertile, mules might be considered a result of hybrid vigor, also known as heterosis, in which “increased vigor or other superior qualities [arise] from the crossbreeding of genetically different plants or animals.” Mules are stronger than horses of similar size yet eat less, and have the endurance and independence of donkeys.

The word mule is from the 12th century and is Latin in origin. Hinny is from the 1680s and comes from the Greek innos, which has the same sense but is of unknown origin.

A zebra hybrid is known as a zebroid, a term attested to 1899, according to the OED: “The zebroid, or hybrid between the horse and the zebra, ‘will be the mule of the 20th century’.” Zebroids include the zonkey, a cross between a zebra and donkey; the zorse, the offspring of a female horse and male zebra; and the zebrinny, that of a male horse and female zebra. The term zebrinny was coined by one Professor E. C. Ewart. Like mules, zebroids are almost always infertile, says Slate, and sometimes experience dwarfism.

The dzo, zobo, and yakalo are, you guessed it, yaks crossed with, respectively, a domesticated cow, a zebu, and the American bison or buffalo.

The dzo is the sterile male while the dzomo is the fertile female. Like the mule, they’re a product of hybrid vigor, and are considered larger and stronger than other yak and cattle in the region. The words dzo, dzomo, zobo, and yak are Tibetan in origin. Yak, which comes from gyag, is thought to be imitative.

No, not that not that Jeep. A geep is a sheep-goat hybrid. Such successful matings are rare, says Modern Farmer, and “most resulting pregnancies are never carried to term.” Understandably, some experts are suspicious of those claiming to have a real-life geep on their hands. “There are lots of anecdotes floating around about these hybrids,” says a professor from UC Davis, “but there are very few legitimate documented cases.”

The cama is what you get when you cross two long-necked creatures. Size-wise, the infertile cama is between the camel and the llama, says Slate. It doesn’t have a hump but it does “seem to have a thicker bone structure than” a llama. Its coat is “long-haired and llama-y while the tail is more camelicious—which is also the name of a popular camel milk brand, FYI.”

For even more animal hybrids, check out this list.