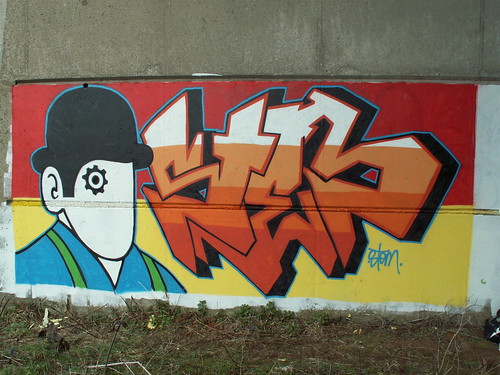 In his iconic novel A Clockwork Orange, Anthony Burgess creates a dystopian world in which youths down milk doused with narcotics before committing random acts of ultra-violence.

He’s also created a language. Nadsat-talk, or just Nadsat, is a mix of Russian, German, French, and Cockney influences, as well as almost every linguistic trick in the book, including blends (chumble, possibly “chatter” and “mumble”), reduplication (baddiwad for “bad”), nounification (warbles for “songs”), shortenings (guff, “to laugh,” from guffaw), and pure invention (cables for “blood vessels” and flatblock for “home”).

On what would have been his 99th birthday, we take a look 10 words invented by Burgess in A Clockwork Orange.

“So I creeched louder still, creeching: ‘Am I just to be like a clockwork orange?’”

In addition to being the title of a book within the book, a clockwork orange refers to someone who has been made to work “like clockwork,” that is, mechanically and without free will.

As for the title’s origin, Burgess himself has a couple of explanations. In The New Yorker, he writes that he first heard the expression “as queer as a clockwork orange” before World War II in a pub in London, and that it’s “an old Cockney slang phrase, implying a queerness or madness so extreme as to subvert nature.” The phrase also juxtaposes “a thing living, growing, sweet, juicy, to a cold dead artifact.”

In Joysprick: An Introduction to the Language of James Joyce, Burgess notes that when he “wrote a novel called A Clockwork Orange, no European reader saw that the Malay word for ‘man’ — orang — was contained in the title.” The Malay orang is also contained within orangutan, which translates as “man of the wilderness.”

“There was me, that is Alex, and my three droogs, that is Pete, Georgie, and Dim.”

Droog, a young hooligan or gang member, is the one Burgess neologism that has made it into the Oxford English Dictionary, at least so far. The word comes from the Russian drug, meaning “friend.” It may be no coincidence that drug is also a homograph of the English drug since pharmaceuticals play a large part in the novel.

Nadsat is another Russian-influenced invented slang term. Meaning “teenage,” the word comes from the Russian suffix for “teen,” nadtsat.

“I read this with care, my brothers, slurping away at the old chai, cup after tass after chasha, crunching my lomticks of black toast dipped in jammiwan and eggiweg.”

Reduplication is another device Burgess uses in Nadsat-speak. The childish singsong of words such as eggiweg, jammiwam, and punchipunching are a chilling apposition against the depraved ultra-violence of Alex and his droogs.

“I took the large moloko plus to one of the little cubies that were all around this mesto, there being like curtains to shut them off from the main mesto, and there I sat down in the plushy chair and sipped and sipped.”

A moloko plus is milk spiked with drugs. Moloko is a direct translation from Russian for “milk.” (Mesto, by the way, is Russian for “place.”) Like eggiweg and jammiwam, moloko plus sets up the childish (milk) against the depraved (hard drugs).

Moloko plus is also called knify moloko — “There we were, a-waiting and peeting away at the the old knify moloko, and you had not turned up” — or “milk with knives in it,” which is made to “sharpen you up and make you ready for a bit of dirty twenty-to-one.”

What does all of this mean? Knives refer to amphetamines, according to the introduction of the book, but perhaps also plays on the term spiked, containing drugs or alcohol. Peet comes from pit, the Russian word for “drink,” while being sharp may be an allusion to being hyper-aware and sped up, an effect of amphetamines. Dirty twenty-to-one might refer to gang violence involving sexual assault.

Other fictional drug names in the novel include synthemesc, vellocet, and drencrom. Synthemesc might come from “synthetic mescaline” while vellocet might play on the name of a motorcycle company, evoking speed and velocity. Drencrom might be an alteration of adrenochrome, a drug that causes “thought disorder, derealization, and euphoria.”

“Dim put on a hound-and-horny look of evil, saying: ‘I don’t like you should do what you done then.’”

Hound-and-horny seems to be a kind of invented rhyming slang term that means “corny.” Other such terms include, for “money,” pretty polly (“If you need pretty polly, you take it”) and cutter, which might come from bread and butter, meaning livelihood. Luscious glory meaning “hair” (“my luscious glory was a wet tangled cally mess”) might come from crowning glory.

“I wanted to be sick, so I got out of bed all trembly so as to go off down the corridor to the old vaysay. But behold, brothers, the door was locked.”

Vaysay is Nadsat slang for the restroom, coming from the French pronunciation of the British English W.C., or water closet. Other French-derived slang terms include sinny, which comes from cinéma or ciné, and tass from tasse, “cup.”

“Why this sudden shilarny for being the big bloated capitalist?”

Shilarny, meaning “concern,” seems to be a purely invented with perhaps an Irish influence. Another invented word with an unclear origin is sharp, slang for “woman.”

“Next it’s going to be the barry place and all my work ruined.”

The barry place, or prison, refers to the bars of a cell. Another slang term for jail is stripey hole, again for the image of prison bars.

“This is the real weepy and like tragic part of the story beginning, my brothers and only friends, in Staja (State Jail, that is) Number 84F.”

Staja is another term for jail, a blend of “State Jail,” but also reminiscent of Stalag, a prisoner-of-war camp in Germany. Stalag is a shortening of Stammlager, which comes from Kriegsgefangenen-Mannschafts-Stammlager, which translates roughly as “main POW camp.”