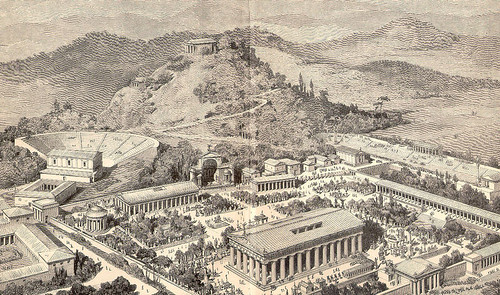 The summer Olympic Games began in London this week, and we’ve  already been enjoying all types of Olympian goodies. We learned about the British origins of the modern Olympic games; 27 things we didn’t know about the Olympics; 12 great Olympic nicknames; and how to talk like a Brit if we happen to be in London. In the meantime, we’ve also gathered 10 of our favorite words from the ancient Greek games, Olympic or otherwise.

“The ancient Greek Olympics took place during a time of truce declared specifically for the Games. The competitions were called ‘agons’ (as in ‘agony’) and they sometimes involved fights to the death. There was no second or third place in the Greek Olympics, no silver or bronze medals. This was, like war, winner take all.”

Ronald R. Thomas, “What the Olympics teach us about the role of higher education,” The Seattle Times, February 17, 2006

Agon is “in Greek antiquity, a contest for a prize, whether of athletes in the games or of poets, musicians, painters, and the like.” Agon comes from agein, “to lead,” and gives us the word agony, says the Online Etymology Dictionary, as well as antagonist and protagonist. An agonistarch is “one who trained persons to compete in public games and contests.”

“The inscription indicates that the Sebasta had standard Olympic events. The foot races were the stadion (on a track of about 190 meters), diaulos (two laps of the track), and a race in which runners wore a helmet and shin guards and carried a shield.”

Diaulos refers to “a double course, in which the racers passed around a goal at the end of the course, and returned to the starting-place.” The word translates from the Greek as “double pipe,” and also refers to “an ancient Greek musical instrument, consisting of two single flutes, either similar or different, so joined at the mouthpiece that they could be played together.”

“If we may trust the old marbles, — my friend with his arm stretched over my head, above there, (in plaster of Paris,) or the discobolus, whom one may see at the principal sculpture gallery of this metropolis, — those Greek young men were of supreme beauty.”

“The Professor at the Breakfast-Table,” The Atlantic Monthly, December 1859

A discobolus is “a thrower of the discus; one engaged in the exercise of throwing the discus.”  When capitalized,  the word refers to “a famous ancient statue by Myron (fifth century B.C.), representing a man in the act of throwing a discus.”

Discobolus translates from the Greek as “discus thrower.” Bolos is related to ballein, which gives us ballistic and hyperbole. Disco- is indeed related to disco, “popular dance music, especially of the late 1970s,” in that disco also referred to the discus-shaped “phonograph record.”

“An Epinicion is an ancient song of victory sung at the conclusion of a triumphant battle. Greeks would sing the song as they walked through the battlefield sorting the wounded from the dead.”

An epinicion is “a song of triumph; a poem in celebration of a victory; especially, in ancient Greece, a poem in honor of a victory in an athletic contest, as at the Olympic, Pythian, Nemean, or Isthmian games.” Epinicion, also spelled epinikion, contains the Greek nike, “victory.” Nike refers to both a sneaker brand and “a type of U.S. defensive surface-to-air missiles.”

The halma, which translates from the Greek as “jump,” is “the long jump, with weights in the hands.” Halma is also “a game for two persons, played on a special board of 256 squares with 19 men apiece, the object of each player being to drive out his opponent’s men from their position and to replace them with his own.” A game of halma

Hederate means “to adorn or crown with ivy, as a victor in the Olympian games.” The word comes from the Latin hedera, a type of ivy, which is related to the Greek khandanein, “to hold, contain.” Hederaceous means “pertaining to, resembling, composed of, or producing ivy.”

“Near the foot of the throne is a table, at which the scribe appears writing in the Olympic records of noble deeds the name, family, and country of the conqueror; near this table a victor in the foot-race, having already received a branch of palm, which he holds in his hand, crowned by an inferior Hellanodic; next him is a footracer who ran armed with a helmet spear and shield.”

A hellanodic is “in Greek antiquity, one of the judges at the Olympic games, who awarded the prizes.” Hellanodic comes from the Greek Hellen, “Greek,”and dike, “judgment, justice, usage, custom.”

“Herodotus compares this method to the Athenian lampadedromy, or torch race, a relay race in which the contestant who arrived first at the goal with his torch still burning won the prize for his side.”

A lampadedromy is “a torch-race,” in which “each contestant carried a lighted torch, and the prize was won by him who first reached the goal with his torch unextinguished.” The word comes from the Greek lampein, “to shine” (which also gives us lamp and lantern) and dromos, “a running.” Dromos also gives us syndrome, literally “running together”; palindrome, literally “running back again”; and dromedary, which comes from the Greek dromas kamelos, “running camel.”

“It is understood the IOC was initially reluctant to allow the government the use of the word Olympics, which is protected by myriad copyright legislation, but agreed because the British Olympic Association (BOA) was to be the lead authority in co-ordinating and bringing together established well run competitions and adding to those to form regional and national Games.”

The Olympics is short for the Olympic Games. According to the Online Etymology Dictionary, Olympic came into English during the 16th century and referred to Olympos, a “town or district in Elis in ancient Greece, where athletic contests in honor of Olympian Zeus were held 776 B.C.E. and every four years thereafter.” This is “not the same place as Mount Olympus, abode of the gods, which was in Thessaly.” The ancient Olympic Games were part of the Panhellenic Games, “four separate sports festivals held in ancient Greece.” The modern Olympics were a revival that began in 1896.

An Olympiad is “an interval of four years between celebrations of the Olympic Games, by which the ancient Greeks reckoned dates.”

“Wrestling, boxing, and the pankration, a combination of the two, were known as ‘heavy’ events because, without weight classes or time limits, bigger athletes dominated. In the pankration, punching, kicking, choking, finger breaking, and blows to the genitals were allowed; only biting and eye gouging were prohibited.”

Pankration is “an Ancient Greek martial art combining aspects of boxing and wrestling, introduced in the Greek Olympic games in 648 BC.” Pankration comes from the Greek pan, “all,” plus kratos, “strength,” and may be a precursor to mixed martial arts.