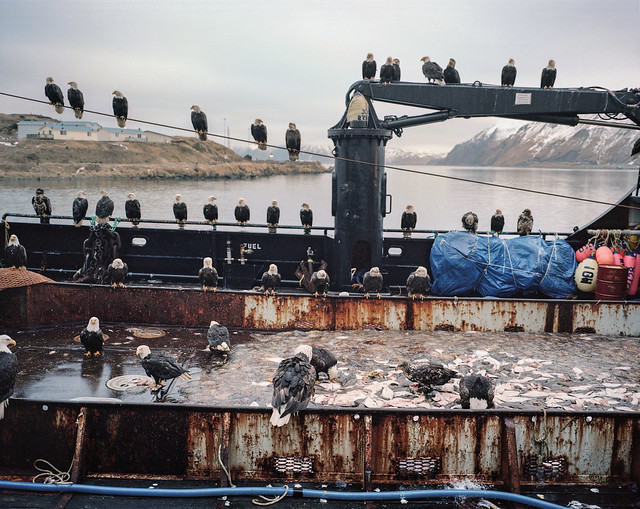 Photo via The California Sunday Magazine

Welcome to Word Buzz Wednesday, your go-to place for the most interesting words of the week. The latest: going nuclear, a dignified scavenger, a kind of blue.

“In deploying this so-called nuclear option, lawmakers are fundamentally altering the way the Senate handles one of its most significant duties, further limiting the minority’s power in a chamber that was designed to be a slower and more deliberative body than the House.”

The nuclear option refers to “a parliamentary procedure that allows the U.S. Senate to override a rule or precedent by a simple majority of 51 votes, instead of by a supermajority of 60 votes.” The term is apparently an analogy to the extreme option of nuclear weapons in warfare.

“People in town call them Dutch Harbor pigeons. The rest of us call them bald eagles.”

Laurel Braitman, “Dirty Birds: What it’s like to live with a national symbol,” The California Sunday Magazine, March 30, 2017

While to many, the bald eagle is a symbol of courage, freedom, and dignity, to the 4,700 permanent residents of Dutch Harbor, Alaska, says The California Sunday Magazine, they’re rats with wings. The estimated 500 to 800 scavengers swarm at boats looking for scraps of bait, hang out at the dump, and dive bomb unsuspecting Coast Guard members and teenage boys with pizza.

“[The Fermi paradox is] an ‘interesting, fascinating paradox,’ Greg Laughlin, the Yale astronomer and astrophysicist, told us in his Ingenious interview. ‘There’s no good answer to why we don’t see manifestations of intelligence throughout the universe.’”

Brian Gallagher, “What Donald Trump Teaches Us About the Fermi Paradox,” Nautilus, March 31, 2017

The Fermi paradox is supposedly named for physicist Enrico Fermi and says that:

we should see intelligent aliens here if they exist anywhere, because they would inevitably colonize the Galaxy by star travel—and since we don’t see any obvious signs of aliens here, searching for their signals is pointless.

However, Scientific American (SA) says Fermi never made such a claim. Rather, the idea came from astronomer Michael Hart who said that if smart aliens “existed anywhere, they would be here,” and since they aren’t, “humans are probably the only intelligent life in our galaxy.” SA also says the Fermi paradox isn’t a paradox at all because:

“The dignified but somewhat aloof word ‘junbungaku’ is an expression apparently peculiar to Japan. It refers to a type of literature pursued purely for its artistic quality.”

Junbungaku is basically the Japanese equivalent of belles-lettres, “literature regarded for its aesthetic value rather than its didactic or informative content.”

“English speakers have ‘light blue,’ sure. But ‘mizu’ is its own color, not merely a shade of another.”

Stacey Leasca, “There Is No Word In The English Language For This Gorgeous Color,” GOOD, March 31, 2017

What English speakers might call “baby blue” is called mizu in Japanese. Mizu translates as “water” and is “as different from ‘blue’ as ‘green’ is from ‘blue,’” says GOOD, and is “similar to how people in the United States use ‘magenta,’ rather than ‘purplish-red.’”