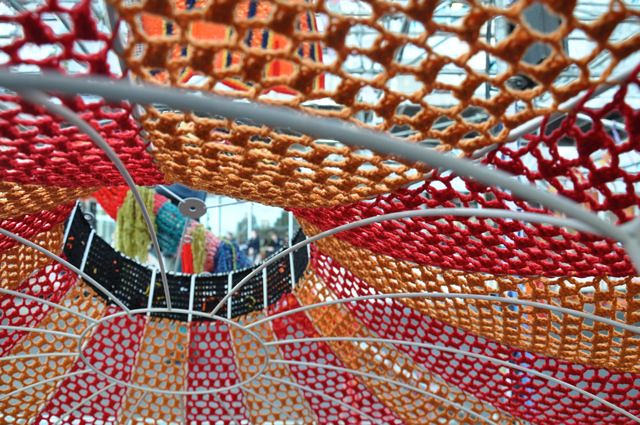 Welcome to Word Buzz Wednesday, your go-to place for the most interesting words of the week. The latest: making quilts in protest; making weird faces during music; making like Bambi.

“Craftivism in the US is largely associated with the resurgent feminist movement, but its roots trace back to colonial times.”

Craftivism, a blend of craft and activism, is a form of protest from “subversive embroiderers, yarn bombers, rage knitters, and crusader calligraphers,” says Quartz.

While U.S. craftivism is largely associated with the resurgent feminist movement, it actually started in colonial times when “women revolted against British taxation on textiles by spinning their own yarn and sewing their family’s clothes,” and spies like Molly “Old Mom” Rinker smuggled “messages to George Washington’s troops through balls of yarn.”

“She also is prone to break into what’s known as ‘bass face,’ a series of gloriously contorted expressions when she’s performing.”

Melena Ryzik, “‘We really felt on fire as a band’: Haim shake off the shackles of the difficult second album,” The Independent, July 11, 2017

Inverse says bass face (or guitar face or singing face) may be “rooted in our evolutionary past.” Back when music was never recorded and always live, it traditionally involved moving, in addition to seeing and hearing. In addition, people are going to be emotionally affected much more by music “than if you’re just merely listening.”

“The home is a classic example of that type of home, with a lovely restored facade (including a mahogany-decked porch) and decorative elements like stained glass windows and what’s known as a jerkinhead roof. (Yes, really.)”

Jerkinhead refers to the end of a roof that’s hipped, or sloped, for only part of its height, leaving a truncated gable. The Oxford English Dictionary says jerkin might come from jerking, with the idea that the slope of the roof has been jerkily interrupted.

“Infobesity, a widespread problem, can be managed by balancing your diet. Try just reading an article without checking text messages or listening to music.”

Ephrat Livni, “If information overload is stressing you out, go on a silence diet,” Quartz, July 9, 2017

This portmanteau of information and obesity refers to information overload or overconsumption.

“The fawn response refers to the inclination to cooperate or submit oneself to one’s threat or captor.”

Some believe the classic “fight or flight” response to stress is oversimplified, says New York Magazine. Other “Fs” include the fawn response; freezing like a deer in headlights; flooding, or being flooded with emotions; and fatigue.