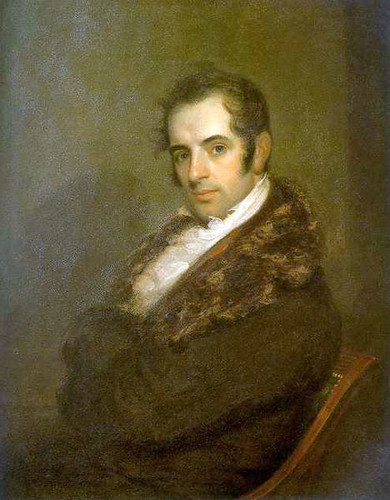 American author Washington Irving was born on this day in 1783. A native New Yorker, Irving is best known for his stories, “Rip Van Winkle” and “The Legend of Sleepy Hollow.” But he’s also the author of many other works, including essays, biographies, and satirical pieces, as well as the coiner and popularizer of several words we still use today. Here are eight from what some consider the first true American writer.

Irving popularized this term meaning “government by the power of words.” Logocracy is Greek in origin with logo comes from logos, “word, discourse, reason,” and the suffix –cracy ultimately from kratos, “strength.”

“[The table] was always sure to boast an enormous dish of balls of sweetened dough, fried in hog’s fat, and called doughnuts, or olykoeks—a delicious kind of cake, at present scarce known in this city, except in genuine Dutch families.”

Irving seems to have been the first to record this delicious word. As for the more casual donut, that turned up, according to the Online Etymology Dictionary, as an alternative spelling in the U.S. “as early as 1870.”

“As great a dom cop, as if he had been educated among that learned people of Thrace, who … could not count beyond the number four.”

Dummkopf meaning a dolt or stupid person translates from German as “dumb head.”

“When I find New Yorkers of Dutch descent priding themselves upon being ‘genuine Knickerbockers,’ I please myself with the persuasion that I have struck the right chord.”

A knickerbocker can refer to a descendant of the original Dutch settlers of New York, a native New Yorker, or breeches or knickers. It’s also where the New York Knicks got its name. The word comes from Diedrich Knickerbocker, the fictional author of Irving’s History of New York. A knickerbocker glory is a kind of elaborate ice cream sundae served in a tall glass.

“The inhabitants not having the fear of the Lord before their eyes were notoriously prone to get fuddled and make merry with mint julep and apple toddy.”

Irving’s seems to be the earliest recorded mention of this summery bourbon beverage. A julep, in case you were wondering, is a sweet, syrupy drink, to which medicine is often added. The word ultimately comes from the Persian gulāb, rosewater.

“Had not this opportunity offered I would have been obliged to make a long roundabout tour by the way of Milan … where I should be detained quarantined smoked and vinegared.”

While quarantine as a noun has been around since the 16th century, Irving seems to be the first to use it as a verb. The original meaning of the noun was a “period of 40 days in which a widow has the right to remain in her dead husband’s house,” and comes from the Latin quadraginta, “forty.”

“In a word, the almighty dollar, that great object of universal devotion throughout our land, seems to have no genuine devotees in these peculiar villages.”

The idiom almighty dollar is a satirical reference to the U.S. dollar, bestowing it with godlike powers.

“This passage of the erudite Linkum was applied to the city of Gotham, of which he was once Lord Mayor, as appears by his picture hung up in the hall of that ancient city.”

While we now associate Gotham with the home of a certain caped crusader, it may have first been used as a nickname for New York by Irving. According to the Oxford English Dictionary, Gotham originally referred to “the name of a village, proverbial for the folly of its inhabitants.” In Nottinghamshire there’s a village called Gatham, which means “enclosure where goats are kept,” but it’s not clear if this is what the name Gotham refers to.

2 thoughts on “The Words of Washington Irving”