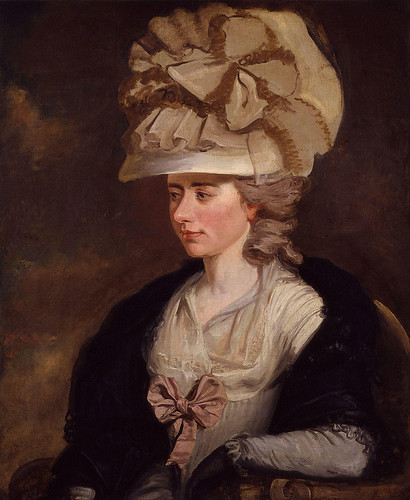 Before Jane Austen, there was Fanny Burney.

English writer Fanny Burney was born on this day in 1752. Known as Madame d’Arblay after she married, Burney wrote several novels and plays, as well as voluminous journals and letters.

Jane Austen was a great fan, going as far as to derive the title of one of her most-loved books from the concluding pages of Cecilia, Burney’s 1782 novel: “The whole of this unfortunate business, said Dr Lyster, has been the result of PRIDE and PREJUDICE.”

In addition to inspiring other writers, Burney also coined or popularized at least a few dozen words that we still use today. Here are our 10 favorites. “’Incomparably well observed!’ cried he, collecting some bonbons from a bonboniere, and swallowing one after another with great rapidity.”

A bonbon is a dainty candy that is often covered in chocolate and has at its center fondant, a kind of sweet creamy paste, fruit, or nuts. The word is French in origin and reduplication of bon, “good.” Burney was the first to bring the word into English.

In case you were wondering, a truffle could be considered a kind of bonbon. While truffles are always chocolate, bonbons may or may not be.

“No, my dearest Padre, bumptious!—no! I deny the charge in toto.”

Burney formed bumptious, “crudely or loudly assertive; pushy,” by combining bump, perhaps with the idea of someone rudely bumping into another, and the –tious suffix of words like fractious.

“In the evening we had Mrs. Lawes, a fat, round, panting, short breathed, old widow; – & her Daughter, a fubsy, good-humoured, Laughing, silly, merry old maid.”

Fubsy is British slang for “somewhat fat and squat.” Burney added an –sy to the already existing fub, “a plump, chubby person,” which is now obsolete. Fubsy may be a play on chubby, which was coined around 1611, according to the Oxford English Dictionary (OED).

“I gagged the Gentleman with as much ease as my very little ease would allow me to assume.”

Gag meaning “to play jokes upon” is older than the noun meaning, “a joke, especially a practical joke; a farce; a hoax.” Burney’s use was either figurative “with the notion of thrusting something down the throat of a credulous person,” says the OED, or imitative, like an older meaning of the word gaggle, “to make a noise like a goose; cackle.” “You know very well I wanted to borrow Mr. Smith’s room, only you were so grumpy you would not let me.”

Evelina, or The History of a Young Lady’s Entrance into the World, 1778

Before grumpy, or even grump, there was humps and grumps, “slights and snubs,” a phrase coined by author Daniel Defoe in 1727, according to the OED. Next came the grumps, a state of ill-humor, the grump, and finally Burney’s grumpy.

For even more on grumpy words, check out our post, A Short-Tempered History of the Curmudgeon.

“She sent me a neat little pocket volume, which I accept from that valuable friend, as just the keepsake, I told her, that could give me only pleasure from her hands.”

While now a memento in general, Burney originated the word keepsake specifically as “a token of friendship.” The word was also “used as the title of some of the holiday gift-books formerly published annually.”

Around 1839, says the OED, the word gained the cynical meaning of “having the inane prettiness of faces depicted in a keepsake volume,” or “the namby-pamby literary style of such books.”

“A pin-a-fore for Master Mortimer Delvile, lest he should daub his pappy when he is feeding him.”

A pinafore is “a sort of apron worn by children to protect the front part of their dress,” and is so-called because it was formerly pinned to the front of the dress. In pinafores means “ at a very young age, childish, inexperienced,” according to the OED.

A pinafore dress is like a jumper in American English, “a sleeveless dress worn over a blouse or sweater.” To add to the confusion, in British English, a jumper is a pullover sweater.

“In sitting down, he flung himself unto the back of his Chair just as he used to do at Twickenham, when he was not in spirits, & I never in my life saw a youngman sulk longer.”

The next time the teenager in your life goes to sulk in his room, you can tell him the word is a back-formation of sulky, which may be an alteration of the obsolete sulke, “sluggish.” The sulks, like the grumps, are a state of ill-humor, and came about after Burney’s use of sulk as a verb.

“The room was so very much crowded, that but for the uncommon assiduity of Sir Clement Willoughby, we should not have been able to procure a box (which is the name given to the arched recesses that are appropriated for tea-parties) till half the company had retired.”

Evelina, or The History of a Young Lady’s Entrance into the World, 1778

Burney probably didn’t expect the seemingly innocuous phrase tea party to become as loaded as it is today.

What was “an afternoon social gathering at which tea and light refreshments are served” became linked to the Boston Tea Party, a demonstration in 1773 by Bostonians disguised as American Indians. As a protest against taxation without representation (for instance, on tea), they “raided three British ships in Boston harbor and dumped hundreds of chests of tea into the harbor.”

The Tea Party movement is an American political movement that “tends to be anti-government, anti-spending, anti-Obama, anti-tax, nationalistic, in favor of strict immigration legislation and against compromise politics.”

“I find, however, useful employment the best tranquiliser, & however my heart still aches – I have less of the violent emotions which have hitherto torn me.”

While we may primarily think of a tranquilizer as a drug to reduce anxiety or put you sleep, it originally referred to anything soothing or relaxing. Burney’s usage, the earliest recorded, is from 1800.

Tranquilize originated around 1623, says the OED, and tranquil in 1616. The earliest citation of tranquil is in Shakespeare’s Othello: “Farewell the tranquile mind, farewell content.”