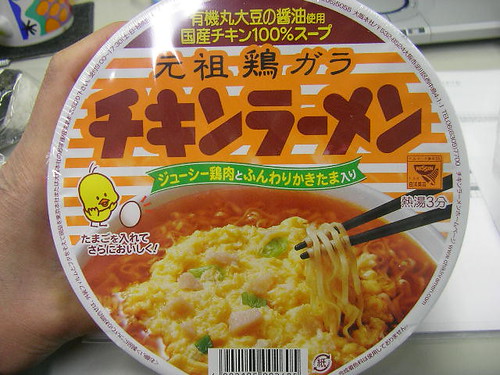 Top Ramen. Oodles of Noodles. Stroke in a bowl. Whatever you call instant noodles, you have one man to thank: Momofuku Ando, born on this day in 1910.

Originally from Taiwan, Ando moved to Osaka in his early 20s. After World War II, he witnessed the ravages of war, including food shortages. In response he embarked on a quest to invent noodles that were “tasty, inexpensive and easy to prepare.” In 1958, at the age of 48, he introduced Chicken Ramen, and 13 years later, Cup Noodles, inspired by Americans using Styrofoam cups as makeshift ramen bowls.

Since then the popularity of instant noodles has spread around the world, and with it, its different monikers. Today we slurp up the language of instant ramen.

Let’s start where it all began. Instant noodles are often referred to by the genericized brand name, kappu men, what Americans know as Cup Noodles. Kappu is a “Japanification” of the word “cup” while men is the Japanese for “noodles.”

Those in the mainland turn to fang bian mian for a quick meal. The catchy rhyming phrase translates as “convenient noodles.” However, searching for fang bian mian on Weibo, a popular microblogging site, may turn up no results. The term was blocked back in 2014 because of its circuitous connection with Zhou Yongkang, a retired senior leader convicted for corruption.

Hong Kongers in a rush might grab a bowl of gong je mein or doll noodles. Named for the little guy on the Nissin package, the term now refers to any brand.

Spicy ramyeon or ramyun comes from a brand name too, Shin Ramyun. Want to add some zing to your instant meal? Here are 13 ways of livening up a bowl of ramyeon.

Indomie is a brand that was introduced in Indonesia in the late 1960s, and has “become synonymous with instant noodles.” Warung indomie are small shops that sell cooked instant noodles, regardless of brand.

Maggi is a popular brand that’s become synonymous with instant noodles in general. They’re eaten at home and served in mamak food stalls. Maggi goreng is a kind of stir-fried dish that uses instant noodles. In 2015, Maggi noodles were banned in India for several months over health concerns.

Mami is a kind of noodle soup said to be invented by chef and entrepreneur Ma Mon Luk, who was born in China around 1896 and emigrated to the Philippines in 1918. Mami supposedly comes from a combination of the inventor’s name, Ma, and mi-ki, the Chinese word for egg noodles.

In Brazil, instant noodles might be called miojo, named for the brand that celebrated the 50th anniversary of its presence in the Brazilian market in 2014.

This brand is so popular in Mexico, one paper dubbed the country Maruchan Nation. Another name for instant noodles might be sopa para flojos, or “lazy people’s soup.”

Got two minutes down under? Then you can make a meal of instant noodles.

A popular brand introduced in the late 1970s, Pot Noodles have been associated with what’s called “lad culture.” The Oxford English Dictionary describes lad culture as “attitudes and behaviour considered to be typical of a ‘lad,’” or:

A young man characterized by his enjoyment of social drinking, sport, and other activities considered to be male-oriented, his engagement in casual sexual relationships, and often by attitudes or behaviour regarded as irresponsible, sexist, or boorish.

A 2013 New Statesman article calls Pot Noodles “Lad Culture in snack form,” complete with “drooling, retrograde sexism,” and a pretty offensive ad campaign. Since then, however, Pot Noodles has attempted to change their tune.