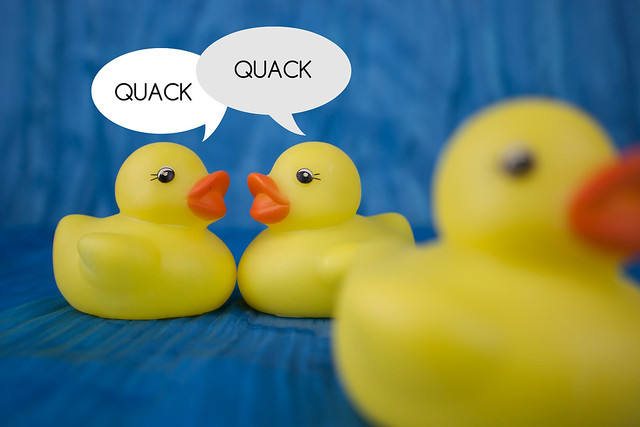 When we heard about Ear Hustle, we thought it was a great idea for a podcast, but also a great term for gossip. That got us wondering about all the different ways we talk about idle talk, whether in different parts of the U.S., England, and other English-speaking countries. Take a listen at the language of gossip.

The etymology of a gossip

The word gossip didn’t always refer to a rumormonger. According to the Oxford English Dictionary (OED), the word originated around 1014 to mean a godmother or godfather, and came from the Old English godsibb, which had the same meaning.

By the late 14th century, the word also meant a familiar acquaintance, friend, or chum, and in 1600 referred to “a woman’s female friends invited to be present at a birth.” From Midsummer Night’s Dream: “Sometime lurke I in a gossippes bole, In very likenesse of a rosted crabbe.”

Around the same time or slightly earlier, gossip gained the familiar meaning of someone “of light and trifling character” who “delights in idle talk” while the term came to refer to idle talk itself around 1811.

Another gossipy old word is long tongue. This 16th-century term can refer to talkativeness itself, says the OED, or a talkative someone who’s prone to “revealing secrets.” The earliest citation in the Dictionary of American Regional English (DARE) is from 1899 with scattered usage throughout the United States, including Virginia, central Pennsylvania, Utah, Indiana, New York, Texas, Kentucky, Mississippi, and South Carolina.

In Utah you might also hear blathergab while blab-fest, “a gathering of people for talking or gossip,” might be blabbed in Connecticut and Indiana, and blabber-fest in New Jersey. In California, Mississippi, and Ohio, someone who goes poking into other people’s business might be called a nosy Rosy while a meeting of gossipers would be Nosy Rosies.

In Irish English a nosy parker might be called a pant. Short for pantomime, says the OED, it also refers to a prank or caper, in addition to talk or rumors, or the gossiper himself. Caribbean English has macomere, which has a similar etymology as gossip. Coming from French — ma commere translates as “my child’s godmother” — it first referred to the godmother of one’s child or the mother of one’s godchild, and later came to be “a term of affectionate respect for any female friend.” It also has the derogatory meaning of an old woman or gossip as well as an effeminate man.

How we talk about idle talk

Dirt. Buzz. Chatter. Those are all ways you might refer to gossip. But if you’re in California, Georgia, Nebraska, or Texas, you might say hash or pig hash, according to DARE.

Street yarn is an early American English expression for gossip or idle talk. DARE says it’s usually used in the phrase spin street yarn, meaning to gossip, while a street-yarn spinner is someone who gossips. DARE’s earliest citation is from 1782 in the Papers of Robert Morris: “It would be out of my Power to neglect my Business having nothing to divert me from it unless to spin Street Yarn.” The term has recorded usage in Ohio, parts of New York, Kentucky, Connecticut, parts of Vermont, and New England in general.

The Scots are not to be left out of the scuttlebutt conversation (scuttlebutt, by the way, originally referred to the drinking fountain on a ship, around which sailors would gather to chew the rumor-filled fat). The Scots clish-clash is imitative in origin as is clish-ma-claver. In Jamaican English, labrish works as a noun, verb, or adjective. The word might come from blab, says the OED, or the echoic laba, to chatter, or laba-laba, talkative.

In Trinidad and Tabago and hear some old talk? You’re hearing it through the grapevine. The OED says it might be short for “old people talk.” Meanwhile over in South African, hearsay or to engage in hearsay might be referred to as skinder. The word might come from Afrikaans skinder, which has the same meaning, says the OED. That might come from the Dutch schender, “person who corrupts, injures, or damages another person or thing.”

There are many ways to describe actually engaging in gossip. You might carry a bone, says DARE, at least in Chicago and parts of Indiana and Massachusetts. This might be related with the sayings bone of contention, the subject of a dispute (coming from the idea of two dogs fighting over a bone) and have a bone to pick, meaning to have a complaint or grievance with someone.

How do you talk about gossip?