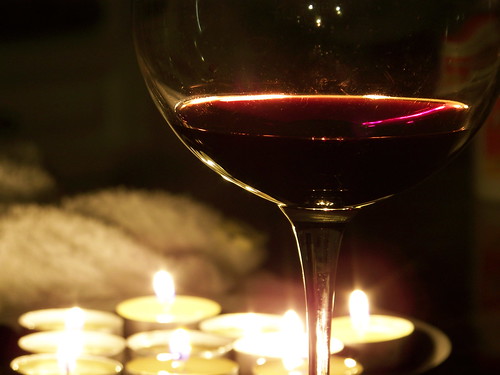 It’s Drinks Week at Wordnik! In honor of Oktoberfest, National Bourbon Heritage Month, and National Coffee Day on Thursday, we’ll be featuring potable – some potent, some placid – words of the day, lists of the day, and blog posts.

The word wine, “the fermented juice of the grape,” comes from the Latin vinum, meaning, well, “wine.” Vinum also gives us vine, as in where grapes grow, and vinous, “having the qualities of wine; pertaining to wine or its manufacture.” It gives us vintner, “one who deals in wine”; vino, an inferior wine; and wino, “a wine-drinking alcoholic.” It gives us vinegar, which comes from the Old French vinaigre, “sour wine,” what wine turns into when not stored properly.

Vinum gives us vintage, “the annual product of the grape-harvest, with especial reference to the wine obtained,” or “having an enduring appeal; high-quality, classic,” and vinyl. According to the Online Etymology Dictionary:

In chemistry, vinyl was used from 1863 as the name of a univalent radical derived from ethylene, from L. vinum “wine,” because ethyl alcohol is the ordinary alcohol present in wine.

The Latin vinum is related to the Greek word for wine, oinos. An oenophile is “a person who has a fondness for wine,” while oenology is “the art of making wine.” Viticulture (from the Latin vītis, “vine”) is the “culture or cultivation of the vine” or grapes (for all things grapes, check out this list).

A sommelier is “a wine steward; the person at an expensive restaurant who keeps the wine cellar and advises guests on a choice of wines.” The word comes not from a wine or vine word but from the French sommier, “beast of burden,” as the original meaning of sommelier was “officer in charge of provisions, pack-animal driver.”

Would you like to see a wine list? Would you prefer a red, such as a Merlot, claret, or Shiraz, or a white, like pinot, Chablis, or Chardonnay? Perhaps you’d like a vintage wine, or a varietal. Sparkling (such as champagne, spumante, or Crémant), or still? Maybe a wine that’s fortified (port, sherry, or vermouth); dessert (or stickies, as those from Australia or New Zealand might call them); or table (Burgundy, Chianti, or rose)? Or maybe you’re in the mood for something mixed (sangria, sillabub, kir). However, we wouldn’t recommend the plonk.

If you decide to try your hand at winemaking, make sure you’re stocked up on barrels and these bottles or these. You might find beeswing, “a gauzy film in port and some other wines, indicative of age,” named for the appearance of the insect’s wings when broken up, or use isinglass, “a form of gelatine obtained from the air bladder of the sturgeon and certain other fish, used as an adhesive and as a clarifying agent for wine and beer.”

For even more vinous vignettes, check out Fritinancy’s posts on wine-naming rules and regulations; wine with a real bite; and wine that’s to die for. Wired Magazine tells us what’s inside a bottle of red, Slate explains why wine writers talk the way they do, and Textism pokes fun at wine-speak.

UPDATE: We got a couple of great emails from our readers, and we thought we’d share the interesting tidbits they provided.

If the volume of that space increases, (ie, the level of the wine in an upright bottle has fallen) that bottle is said to be “ullaged”. Excessive ullage, which is caused by leakage through the cork or synthetic closure and compensatory influx of air, is harmful to the wine. When a bottle of wine is opened it is said to be “on ullage” and therefore ready for the pouring of a drink. Different principles apply to sherry.

As I was born in a winegrower’s family, I would like to give you an extra item concerning the french word «ouillage»: this action is particularly meant to avoid oxydation of the wine in a cask buy the layer of air which is upon the surface of the wine. Oxydation most often makes elements of flavour get lost.

Keep your cups handy for tomorrow’s post – the way of tea.