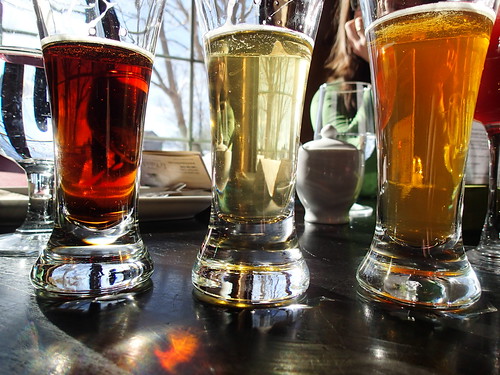 Every year from late September to early October, beer lovers around the world celebrate Oktoberfest, “an autumn festival that usually emphasizes merrymaking and the consumption of beer.” What better way for Wordnik to celebrate – and to wrap up Drinks Week – with some words about this grainy fermented concoction.

Back in the day, beer was often referred to as barley-broth, “used jocosely, and also in contempt.” Thus, barley-sick means to be intoxicated. Nowadays you might ask for a brew, named for the brewing process; a brewski, perhaps modeled on Russky, an offensive term for someone of Russian descent; some suds, referring to the frothy head of a beer; or a cold one.

In Australia, New Zealand, and some parts of the UK, a beer may be called a tinnie, referring to the can (which is actually made from aluminum).  Other Australian slang for beer includes amber nectar, amber fluid, coldie, and sherbet. Sherbet as slang for beer may come from the word’s original meaning, “a favorite cooling drink of the East, made of fruit-juices diluted with water, and variously sweetened and flavored,” or another meaning, “a powder made of bicarbonate of soda, sugar and flavourings, intended to be eaten alone or mixed with water to make a drink,” perhaps resembling a frothy beer.

In British English, a bitter is “a type of beer heavily flavored with hops,” while wallop is British slang term for beer and perhaps refers to the meaning “to boil with a continued bubbling or heaving and rolling of the liquor.”

Wallop helps to form codswallop, “senseless talk or writing; nonsense.” However, the origin of codswallop is obscure. Over at World Wide Words, Michael Quinion says it may come from the “testicles” meaning of cods, combined with wallop’s connection to “the dialect term meaning to chatter or scold.” Another explanation is that cod refers to Hiriam Codd, who in the 1870s “designed and patented a method of sealing a glass bottle by means of a ball in its neck,” perfect for preserving the fizz in fizzy drinks. Presumably, beer drinkers would be “dismissive of Mr Codd’s soft drinks,” and might refer “sneeringly to the fizzy drink as Codd’s wallop, and the resulting word later spread its meaning to refer to anything considered to be rubbish.”

A roadie is “a beer for the ride, for consumption while one is driving,” also known as a road soda (and definitely NOT something we’re recommending!) while a growler is “a vessel, as a pitcher, jug, pail, or can, brought by a customer for beer.” To rush the growler means “to take a container to the local bar to buy beer,” which in the 19th century was a job “often given to children.” But where does growler meaning container for beer come from? There are a few theories.

According to World Wide Words, it could refer to “the image of a hunter sending his dog rushing to fetch downed prey, so that the growler in our expression is the dog,” or “the growling noise the full can made as it was pushed across the bar,” or because the “scramble after beer” causes so much trouble. The Beer Advocate suggests that “when the beer sloshed around the pail, it created a rumbling sound as the CO2 escaped through the lid,” similar to growling, or that perhaps growling referred to the empty stomachs of factory workers before they were given beer at mealtimes.

A kegger is “a party at which beer is served from a keg.” Beer pong is “a drinking game in which players attempt to throw a ping pong ball into cups of beer,” and seems to have originated at Dartmouth College in the 1950s and 1960s. Dwile flonking is a game “in which teams take turns to dance while avoiding a ‘dwile’ (beer-soaked cloth) thrown by their opponents.” Dwile is “an old Suffolk dialect term for a dishcloth; dweil, said the same way, is the Dutch word for a floorcloth, or in defunct slang a drunkard,” while flonk may be based on flong, “the name in printing for a paper mould used to create an impression of type.”

Bad or inexpensive beer may be referred to as swill and piss. Swipes is “poor, washy beer; a kind of small beer,” and comes from swipe’s sense of “to drink, or drink off, hastily.” To be swipey is to be drunk. To be gambrinous is to be “full of beer,” and probably comes from King Gambrinus, a legendary king of Flanders, and an unofficial patron saint of beer or beer brewing. If you have beer goggles you have “the illusion that people are more attractive, brought on by alcohol consumption.” If you have a beer belly, you have “a protruding abdomen (usually in men) attributed to the consumption of beer.”

Beer and skittles is a British term referring to fun times (“Life’s no beer and skittles”). Skittles refers to “a pub game in which a ball is rolled down a wooden alley in order to knock down as many of the nine skittles as possible.” In the suds means to be “in turmoil or difficulty,” suggestive of the suds of beer. To carry the can means to “to take responsibility, especially in a challenging situation,” and may refer to “the member of a gang or party who fetches the beer for all and then has the melancholy task of returning the empty.”

For even more beer words, check out our list of the day. For beer sizes, here’s this list and this piece from Smithsonian Magazine. Fritinancy discusses some extreme beer brands (a pint of SkullSplitter sounds relaxing), while The New York Times recently had a beer session with Garrett Oliver, the brewmaster at Brooklyn Brewery and editor of The Oxford Companion to Beer. And while coffee might smell better than it tastes, beer definitely tastes better than it smells.

For all things Drinks Week, be sure to check out our posts on the languages of wine, tea, mixed drinks, and coffee.

One thought on “Drinks Week: Beer”