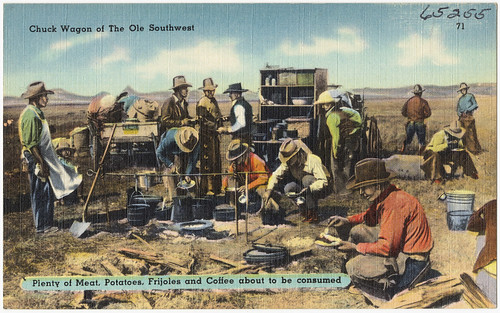 You might be aware that we at Wordnik love our coffee. In a classic post we explore caffeinated language from around the world, from the Italian espresso to the French café au lait to the Australian flat white.

Today we’re delving into how we talk about coffee in the U.S., and to help us are the editors at the Dictionary of American Regional English, also known as DARE. In case you didn’t know, DARE is a fantastic resource of language specific to states and other regions. For instance, what you call a frying pan might be called a skillet elsewhere. What you call pancakes might be flapjacks or griddle cakes in other parts of the country.

But we’re here to talk about joe. Pour yourself a mug and drink in these regional terms.

Why call a bold cup of java strong when you can call it blackjack? Blackjack is a term used in Wisconsin and in “lumberjack lingo” in New England and the Great Lakes. Another lumberjack term for strong coffee is Norwegian or Norski in states like Minnesota and Wisconsin, which have long histories of Norwegian settlers. Norwegian coffee also refers to coffee with an egg in it.

Shanty coffee seems to have originated in the New York area and is so-called as it was made by fisherman who lived in shanties, or little cabins or huts. Cowboy coffee is named for, you guessed it, the cowboys who boiled it. Six-shooter coffee is a cowboy term that comes from the idea, says DARE, that “it’s thick enough to float a pistol or because there’s six tablespoons for a four-cup pot.”

Strong enough to walk could refer to any strong-flavored food or drink but especially coffee, and centers in the South and Midland regions of the U.S.

Descriptions for weak coffee percolate across the U.S. as well. In Texas you might hear it called duck coffee, perhaps with the idea of a liquid a duck would swim in, i.e., water. In Pennsylvania it might cambric coffee, after the fine, thin fabric. In scattered regions, it might be dishwashy or dishwater.

In the Inland South and Appalachians there’s stump water, originally rainwater collected from tree stumps and used in folk magic and home remedies for ailments such as skin conditions. Perhaps by extension, stump water also means anything weak, often coffee. In other regions, the term water bewitched is used to describe highly diluted coffee or tea, often in the phrase water bewitched and coffee (or tea) begrudged.

Slumgullion, referring to a weak or disgusting beverage, was perhaps first used primarily in the western United States but now can be found in other regions as well. In his 1915 book, Travels in Alaska, John Muir describes a cup of coffee as “muddy” and “semi-liquid…which the California miners call ‘slickens’ or ‘slumgullion.'”

How do you take your coffee?

Boston coffee is half cream, half coffee (perhaps named after the Boston cream pie?) in Louisiana, Texas, Illinois — but not in Boston.

What exactly do you mean by ‘regular’?

A regular coffee is like a box of chocolates. You never know what you’re gonna get.

In Boston and Massachusetts, a regular coffee will get you one with cream or milk. In Rhode Island, it’s cream or milk and sugar. In Chicago it’s black while in Vermont, New Hampshire, and Virginia, regular is caffeinated rather than decaf. Finally, in New York, a regular coffee has milk or cream, and possibly sugar (or two sugars, as Gothamist insists).

We’ve discussed idioms about a literal cup of coffee, but how about idioms with the word coffee? Coffee coat is another name for a housecoat used in Wisconsin. Grinding coffee is a way of jumping rope in Tennessee and perhaps elsewhere: one jumper stays in place while another jumps around her, like the wheels of an old-fashioned coffee grinder.

Coffee cooler is a military term for an idler or shirker, perhaps with the idea of an untouched hot beverage cooling off, while a coffee-strainer is nickname for a bushy mustache.

Be prepared if someone invites you to a coffee-drink in Louisiana: they’re talking about a wake. If someone in the South Midland or Texas says you don’t know split beans from coffee — in other words, you’re stupid or ignorant — you might consider giving them a drink of black coffee, or a severe reprimand, as they say in Pennsylvania.

How do you talk about your coffee?