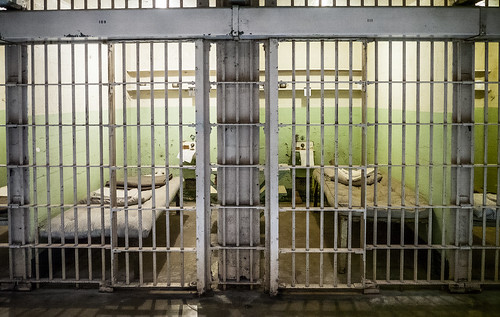 The pokey. The slammer. The clink. How many different ways are there to say prison, and where do these words come from? We decided to find out.

Our latest obsession isn’t completely arbitrary. Forty-nine years ago today, Alcatraz closed as a federal penitentiary. Also called the Rock, the island was named for bird that roosted there, the pelican, which in Spanish is, you guessed it, alcatraz.

From the other side of the country came the expression up the river, which, according to the Online Etymology Dictionary, originally referred to the Hudson River and Sing Sing, a maximum security prison in Ossining, New York. Sing Sing was the original name of Ossining, and was derived from the name of the Native American tribe, the Sint Sinck, who sold the area to one Frederick Philipse.

Some prisons were so famous (or in some cases, infamous), their names became common words. The stir in stir-crazy (“distraught or restless from long confinement in or as if in prison”) is a slang term for prison, and comes from Start Newgate, “a former prison in London notorious for its unsanitary conditions and burnt down in riots in 1780.” Meanwhile, Newgate became a verb meaning “to imprison.”

Another synonym for prison, bocardo, originally referred to Bocardo Prison in Oxford, England. Bastille, which comes from an Old French word meaning “fortress, tower, fortified, building,” was “built in Paris in the 14th century and used as a prison in the 17th and 18th centuries,” and now refers to “a jail or prison (especially one that is run in a tyrannical manner).”

But how does one get to prison? You could take a paddy wagon, which may come from Paddy, which originated from “the pet form of the common Irish proper name Patrick (Ir. Padraig),” and became a disparaging term for someone of Irish descent. Paddy wagon was so-called perhaps “because many police officers were Irish” at the time (around 1930). The paddy wagon is also known as a meat wagon, cattle car, or Black Maria.

According to World Wide Words, Black Maria is American in origin, though its exact etymology is unclear. The name may come from a Boston story “about Maria Lee, a large black woman who kept a boarding house in the 1820s with such severity that she became more feared than the police, who called on her to help them catch and restrain criminals,” or from the name of a “famous black racehorse of the period, also named Black Maria.”

Before heading to the big house, prisoners may first be held in a sponging-house, “a victualing-house or tavern where persons arrested for debt were kept by a bailiff for twenty-four hours before being lodged in prison, in order that their friends might have an opportunity of settling the debt.” The sponging-house was so-named “from the extortionate charges made upon prisoners for their accommodation therein,” with sponge meaning “to drain; harass by extortion; squeeze.”

A bridewell was “a house of correction for the confinement of vagrants and disorderly persons,” and became a name “generally given to a prison in connection with a police-station, for the temporary detention of those who have been arrested by the police.” According to the Virtual Linguist, the term bridewell “comes from an old area of London near modern-day Fleet Street, where there was a well dedicated to St Bride,” a patron saint of Ireland, and “is still used by some police forces in the UK, usually as the name of a police station, or of a custody suite.”

A spinning house was “a house of correction, so-called because women of loose character were obliged to spin or to beat hemp as punishment.” Spinster, which originally referred to any person, man or woman, whose occupation was spinning, also meant “a woman of an evil life or character: so called from being forced to spin in the house of correction.” The word is now commonly known as “a woman who has remained single beyond the conventional age for marrying.”

A rogue-house is a house for rogues; a lobspound is a pound for lobs or louts, and was “often applied to the juvenile prison made for a child between the feet of a grown-up person.” Another prison term, hoosegow, was coined in 1911 in the western U.S. probably as a mispronunciation of the Mexican Spanish juzgao, “tribunal, court.” An older term, calaboose (1792), is from the Louisiana French calabouse, which comes from the Spanish calabozo, “dungeon.”

A panopticon was a prison proposed by Jeremy Bentham, “so arranged that the inspector can see each of the prisoners at all times without being seen by them.” On a smaller scale is the Judas, “a small opening in the door or wall of a cell to enable the guards to watch the prisoners.” Also called a judas-hole.

Whatever you call the joint, be sure to keep your nose clean and stay out.

While for many Labor Day weekend signals the end of summer, it was originally started to celebrate the “laboring classes.” In this post we’ll be celebrating working hard or, as the case may be, hardly working.

If you have ergasiomania, you have “a restless desire, amounting at times to an insane impulsion, to be continually at work.” (The word also has a meaning that pertains specifically to surgeons: “a desire. . .to operate at every opportunity, whether or not the operation is indicated or justifiable.”)  As an ergasiomaniac, you may be a workaholic, “a person who feels compelled to work excessively”; or a sleep camel, “a person who gets little sleep during the week, and then attempts to make up for it by sleeping in and napping on the weekend.” You may practice inemuri, “the Japanese practice of sleeping on the job. . .to show how committed you are to working.”

You may experience job spill, “work or work-related tasks that carry over into personal time.” You may practice the art of weisure, “free time spent doing work or work-related tasks”; experience vacation deprivation; or take fake-cations, “a vacation where a significant amount of time is spent reading email and performing other work-related tasks.” Maybe you’re a mucus trooper, “an employee with a cold or the flu who insists on showing up for work,” practicing presenteeism, “the act of being present at work even if one’s too sick to be productive.” Hopefully you’ll never succumb to karoshi, a Japanese term for “death, such as from heart attack or stroke, brought on by overwork or job-related stress.”

On the other end of the ergo (that’s Greek for “work”) spectrum is ergasiophobia, “an irrational fear of work.” (Again, the word also has a surgeon-specific definition: “excessive timidity, on the part of a surgeon, and fear to perform an operation even when it is urgently indicated.”) This phobia isn’t due to laziness but rather to performance anxiety and a fear of failure.

A luftmensch doesn’t have ergophobia but prefers not to work, and is “more concerned with airy intellectual pursuits than practical matters like earning an income.” A luftmensch may keep company with slackers, or underachievers; NEETs, those “not in employment, education, or training”; or freeters, young people who “work only when they need cash,” and otherwise “hang out, travel whenever possible and celebrate their rejection of their parents’ old work-aholic lifestyle.”

Or maybe you have a job and work hard, but occasionally find yourself practicing eyeservice, “service performed only under inspection of the eye of an employer”; glazing, or “sleeping with your eyes open,” during meetings; or social notworking, “surfing a social networking site instead of working.” You may do a desk tour, “when you and at least one other co-worker tour the desks of other workers, ideally in other divisions, floors, etc.,”; some smexting, texting while smoking; stealth parenting, “performing childcare duties while pretending to be at a business meeting or other work-related function”; or getting paid for some undertime, time stolen “during the day to compensate for heavier workloads and more stress” by running errands, shopping, or surfing the Internet.

Whether you’re a salaryman, a dogsbody, or a desk jockey; a lychnobite, a nine-to-fiver, or arubaito; whether you’re in middle management or a muckety muck, we hope you enjoy these occupational words (and a sinecure). Now get back to work! Or at least pretend to.

Special thanks to Word Spy for some of these great working – and non-working – words. At Wordnik, we love all the words (that’s what the heart in the logo means, after all) but there are some words that are especial favorites (that’s what the favorite function is for, after all) … and quite a few of those words are cricketing terms. Only a couple of Wordniks can honestly claim to be true cricket fans (Krishna and Kumanan) but none of us can resist the lure of words like googly (“A googly is a ball delivered by a bowler that looks as if it ought to break from left to right across the bat of a right-handed batsman.”) and Dilscoop (” … [the] stroke “Dilscoop” [ invented by Tilakaratne Dilshan] which involves going down on one knee and scooping the ball over his head in area behind the wicketkeeper.”) Not to mention the best phrase in all of sports: silly mid-off. (Which is the same as the silly mid-on, just on the other side of the pitch. Make sense? No? Well, it doesn’t matter.)

Cricket words are so compelling, in fact, that Wordnik has three different lists devoted to cricket! They are: Sportie: Cricket, i don’t like cricket — i love it, and Cricket! That last link is to an open list — feel free to add your own favorite cricket terms to it!

Is there some other topic that you think has better words than cricket? You can always sign in to Wordnik and create your own list of great words to share …

I’ve been following the court battle between J. K . Rowling/Warner Brothers and the owner of The Harry Potter Lexicon with mixed feelings. My first thought was that the idea that words can be owned by anyone is ridiculous.

But when the words in question are all original works, it changes the equation. And the fact that Rowling has hitherto been so open and supportive of Potter fans and some derivative works puts her in a different category than your typical litigious big media company. I’m inclined to think she should be the final arbiter of who presents Potter content, in any form.

The nearest analogy I can think of is the Star Wars universe, which contains books, movies, and many other derivative works, and which is tightly controlled by Lucas and his minions.

This raises the question of who owns all the content on Wordie. I never bothered to write terms of service, because they just seem dumb. No one reads them, and in the few instances of abuse that have arisen, I’ve used technical solutions, like blocking IP addresses, rather than legal ones. I did consider having a TOS which, in the small print, gave all rights to all content to Bill Shatner, or perhaps Abe Vigoda, and may do that retroactively. Thoughts?