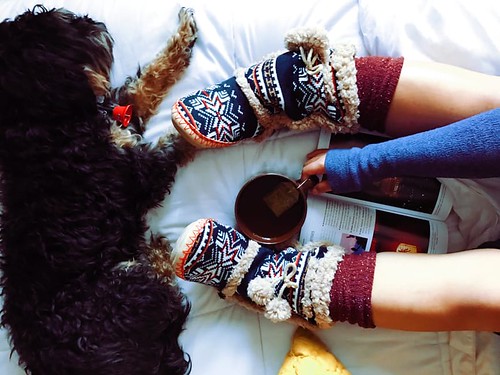 By now you might have heard about the Danish phenomenon, hygge, a kind of cozy contentment, which sounds heavenly on chilly winter days like these. That got us wondering about the English word cozy, where it comes from, and about other cozy words and expressions.

While we all know what cozy means, it’s not clear where the word comes from. The Online Etymology Dictionary says it started out as colsie, which is Scottish dialect, and might ultimately be of Scandinavian origin. For instance, the Norwegian kose seg means “to bask” or “be cozy.”

The Oxford English Dictionary (OED), on the other hand, doesn’t mention the Scandinavian connection. While it agrees the word is originally Scots, “and perhaps northern English,” it proposes a possible connection with old meanings of cosh, “neat; snug; quiet; comfortable,” or “a cottage; a hovel,” or the Gaelic còsagach, “full of holes or crevices; sheltered, snug, warm.” But then it immediately shuts these theories down, saying neither “seems tenable.”

Regardless, the earliest meaning of cozy, again according to the OED, is in regard to people —  “Comfortable from being warm and sheltered; snug” — with the earliest citation from 1665 in a sermon by a minister named William Guthrie: “When Israel was Colsie at Home.”

The next oldest meaning is about place: sheltered and warm, or that which is warm and comfortable. The earliest recorded usage is from Scottish poet Robert Burns in 1786: “Then canie, in some cozie place, They close the day.”

The newest meaning of cozy is from the 1920s: “warmly intimate or friendly,” but also the pejorative sense of “complacent, smug.” The earliest citation is in a 1927 letter by English essayist Max Beerbohm: “We liked her very much. She isn’t exactly cosy, but she’s very spirited.”

How to keep that pot of tea warm? With a tea-cozy of course (or if you prefer your beverage warmers British, tea-cosy). The earliest recorded usage is from 1863 by scientist John Tyndall in his book Heat: A Mode of Motion: “It is not unusual to preserve the heat of teapots by a woollen covering, but the ‘cosy’ must fit loosely.” An egg-cozy is a similarly quilted covering but for, you guessed it, a boiled egg.

A cosy seat (1876), says the OED, is “a canopied seat for two, occupying a corner of a room,” while a cosy corner (1894) is “an upholstered seat which fits into a corner of a room,” or “such a corner, cosily furnished.” Cosy stove was a proprietary name for “a free-standing enclosed stove.”

Miss Crawford appeared gratified by the application, and after a moment’s thought, urged Fanny’s returning with her in a much more cordial manner than before, and proposed their going up into her room, where they might have a comfortable coze. . .

One night say that cozy mysteries, also known as cozies, are Austen-like — light, humorous, and quirky, unlike darker and more violent traditional crime fiction. When and where the term originated, however, is, well, a mystery. This blogger uncovered some of the same findings we did, including this 1992 article in The New York Times: “Thrillers like Thomas Harris’s ‘Silence of the Lambs’ have incited a new wave of polite, ‘cozy’ mysteries, remarkable for their nonthreatening content and nonviolent characters.”

Earlier is a use in a 1986 magazine, San Francisco Focus (“Winn cites Christie as the doyenne of cozy mystery writers”), and a 1987 issue of Kirkus Reviews: “A sluggish attempt at writing a modern thriller in the style of an old-fashioned tea-cozy mystery, full of stiff upper lips and bracing cups of tea.”

A cozy word that might give coze a run for its money is snuggery, a British term for a snug, warm, comfortable place or position. The OED describes it as a small and cozy room, “into which a person retires for seclusion or quiet; a bachelor’s den.” Another meaning is “the bar-parlour of an inn or public-house.”

The word snug, like cozy, might be of Scandinavian origin. The sense of “compact, trim” is from the 1590s, says the Online Etymology Dictionary, and was originally a nautical term, especially meaning “protected from the weather.” This might have come from a “Scandinavian source” such as the Old Norse snoggr, “short-haired,” or the Old Danish snøg, “neat, tidy.”

The sense of “in a state of ease or comfort” was first recorded in the 1620s while “fit closely” is from 1838. And in case you were wondering, the the expression snug as a bug in a rug originated around 1769. Before then you’d have said snug as a bee in a box, which we’d argue sounds far less cozy.